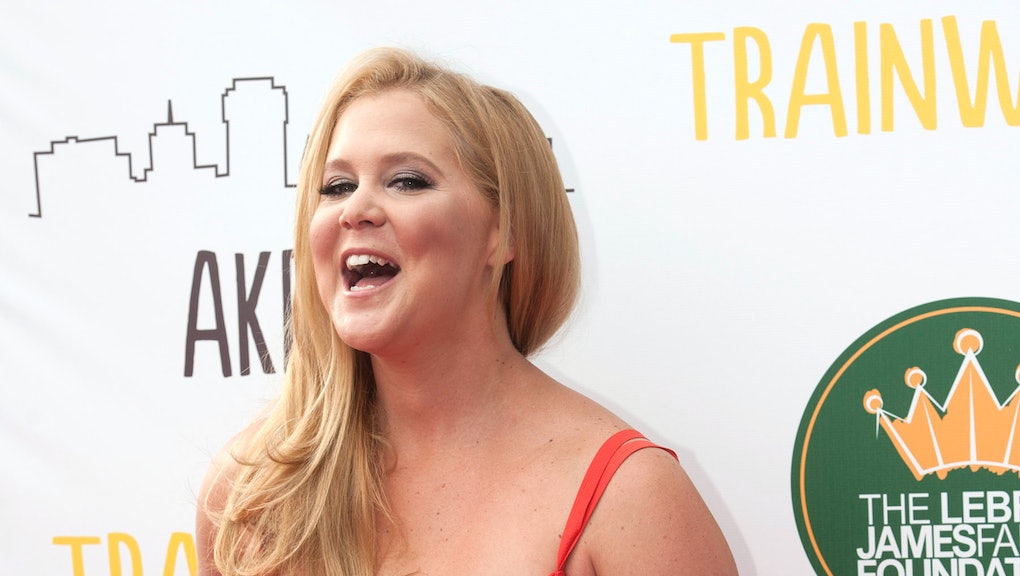 Amy Schumer has quite literally grabbed America by the balls.

With her sexually charged comedy and apparent lack of regard for what's considered politically correct, the 34-year-old comedian has taken the nation by storm, appearing on magazine covers, starring in her own TV show on Comedy Central and in a movie she wrote titled Trainwreck, while raking up awards along the way.

Behind her self-degradation and playful skits (which mock just about every single classification of human beings) lies a very subtle and refreshing truth: When it comes to comedy, Schumer fears nothing, and everything is on the table.

Schumer's antics have given her a badass reputation in Hollywood, and she's used her moment in the limelight to bring up some important points most of us are afraid to even discuss. Here are all the times Schumer proved this is her Trainwreck of a world, and we're all just living in it.

Schumer fans know how un-fond of red carpets the stand-up comedian is. She jokes about not being able to smile correctly for cameras time and time again, and she doesn't tend to take celebrity appearances very seriously. That's why, when the opportunity to topple over and come crashing down in front of Kimye at the Time 100 Gala red carpet, she took it full force.

2) When she parodied every single female celebrity interview

Schumer relishes in making light of how seriously some celebrities take themselves and doesn't miss a chance to fire shots at anyone being a tad too pretentious for her liking. So she decided to do a skit in her latest season of Inside Amy Schumer, where her character — Amy Blake Lively — does a late night TV interview that seems all too similar to just about every single late night celeb interview.

In perhaps one of the greatest acceptance speeches since the creation of awards dinners, Schumer slammed body-shaming and gender inequality after receiving the Trailblazer of the Year award.

What's extra badass about her speech is not its poignancy, but the fact that she used Glamour, a women's beauty magazine, as the podium to make a point about how society treats women and their bodies in the media.

4) When she, Tina Fey, Julia Louis-Dreyfus and Patricia Arquette shed light on "The Last F*ckable Day" for women in Hollywood

Hollywood has a special way of phasing out women from popular films and TV shows after they've reached a certain age. We see it all the time: Younger actresses are picking up leading roles while the tenured ladies of comedy and media are left empty-handed.

Schumer decided to spin this fact on its head by celebrating the moment when fellow actress Julia Louis-Dreyfus learns she is no longer f*ckable and can no longer find work in Hollywood. Instead of being upset about the lack of work, Louis-Dreyfus explains how happy she is to no longer have to keep up with her body image. In a telling statement on gender inequality, Schumer asks about when men get their last f*ckable day, and the leading ladies start laughing hysterically at the statement.

The ladies send Louis-Dreyfus off in a ritual to conclude her newly non-f*ckable status:

Schumer was speaking at a gala last year when she said,

"Now I feel strong and beautiful. I walk proudly down the streets of Manhattan. The people I love, love me. I make the funniest people in the country laugh, and they are my friends. I am a great friend and an even better sister. I have fought my way through harsh criticism and death threats for speaking my mind. I am alive, like the strong women in this room before me. I am a hot-blooded fighter and I am fearless ... I am not who I sleep with. I am not my weight. I am not my mother. I am myself. And I am all of you, and I thank you."

Schumer has told her fans and audiences countless times she is not afraid to talk about race. So, when a joke she made about Mexicans came under fire for being considered extremely racist, she penned the perfect response on Twitter.

Schumer was right on trend when the first episode of her third season aired on Comedy Central. She had already dubbed 2015 the year of the booty, and took it a step further with the first skit of the season.

8) When she shut down every trend possible on social media

She even posed topless after reading some negative reviews on her body shape:

How do you recruit J.K. Simmons for a picture as epic as this one? We're dying to know.

9) When she wrote an entire movie, and starred in it as the lead role

Trainwreck, which Schumer wrote and Judd Apatow directed, seems very similar to the stories she's told in many of her stand-up acts (see: not being able to keep a boyfriend, her friends aging and getting married while she remains a hot mess, etc).

After seeing a screening at the South by Southwest festival, Moviefone's Drew Taylor wrote:

"While the screening of Trainwreck that debuted at the South by Southwest Film Festival in Austin, Texas, back in March was designated a 'work-in-progress screening,' it was so fully formed, so hilarious, so brilliant and explosive and heartfelt, that it felt finished and ready to capture the national zeitgeist, which it will undoubtedly do when it's finally released this summer. Sometimes you see a movie and just know that in a few months everyone will be talking about it. Trainwreck is that movie."

Schumer wrote a role that coincides perfectly with the comedic brand and powerhouse she has become in such a small amount of time. It's rare for any comedian to get the chance to star in their own network TV show and star in a film they wrote themselves, regardless of what gender they happen to be.

10) When she refused to ever vote for any government election, or anything for that matter, even with a senator in her family

Not one to get too mixed up in politics, Schumer admitted in a 2013 BuzzFeed article she steers clear from voting in elections and just about anything else. She says she never votes, "Not even in a school election, or even when someone asks where I want to get dinner. I never throw my two cents in. I just don't want to get started. I think once I start sharing my opinion or voting, it's just going to take all my time. Even if someone's like, 'Is it hot out or cold out?' I'm like, 'Just please Google the weather because I'm just not going to voice my opinion on it.'"

That's particularly interesting coming from Schumer, who is cousins with Sen. Chuck Schumer (D-NY). The two weren't aware of their family tree until recently, but that doesn't seem to have had any effect on Schumer's standpoint on the issues.

Fictional Rep. Amy Schumer had some pretty severe bumps in the road during her time in Congress. In a mock press conference, Schumer takes questions regarding nude photos sent via Twitter and lewd text messages from her phone, and other issues many male figures in Congress and government face. The clear and sometimes hilarious double standards in this video speak to our society's lack of gender equality in government.

When asked to explain graphic nude photos she tweeted publicly to a Twitter user:

Schumer is more than just a female comic: She's a writer, a director, an entrepreneur, a social media trendsetter, a comedian and a businesswoman on all fronts. When Salon asked her if she gets questioned on what it's like to be a female in comedy, she summed up her issues with the media perpetuating gender inequality perfectly:

"You would think that would be a question that would come up less than it does. But no, almost every interview I'm asked if it's harder to be a female comic. That, and also how I feel when people say women aren't funny. I think that question just comes out of laziness. 'Cause I don't think it's true. And while I'm sure there are some people who say that women aren't funny, I don't think most people do. I think those things are perpetuated by journalists, and I don't actually run into it that much."

You go Amy. We're jumping on the Trainwreck right along with you.