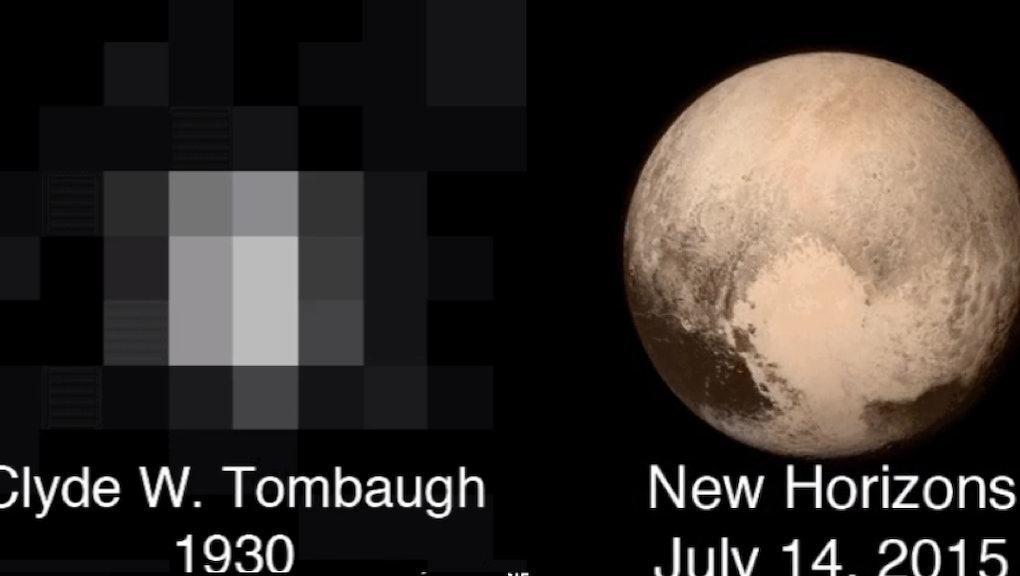 On Tuesday morning, NASA's New Horizons spacecraft passed closer to the dwarf planet Pluto than any man-made object has done in history. In a mission that took over nine years, New Horizons has now traveled roughly 3 billion miles from its launch site in Cape Canaveral, Florida.

Before doing so, the craft sent down a high-resolution image of Pluto, showing in stunning detail the surface of our farthest neighbor.

And Tuesday evening, NASA one-upped itself again by posting all the images we have of Pluto, from its grainy, blurry first sighting by astronomer Clyde Tombaugh in 1930 to its clear image today.

There's more to come: NASA announced more photos from the fly-by will be released on Wednesday morning, showing Pluto in even greater detail before New Horizons continues on its journey through space.

Now that New Horizons has released new images from Pluto and its moon Charon, the GIF has been updated. It's like zooming in to see your house on Google Earth — except it's from 3 billion miles away.

Sometimes the global community tends to forget about the immensity and staggering promise of outer space, no matter how much of today's technology comes from NASA's research. These images represent what NASA does best: It instigates wonder. If nothing else, the New Horizons program does one thing everyone can appreciate. It makes us take a minute to look up.