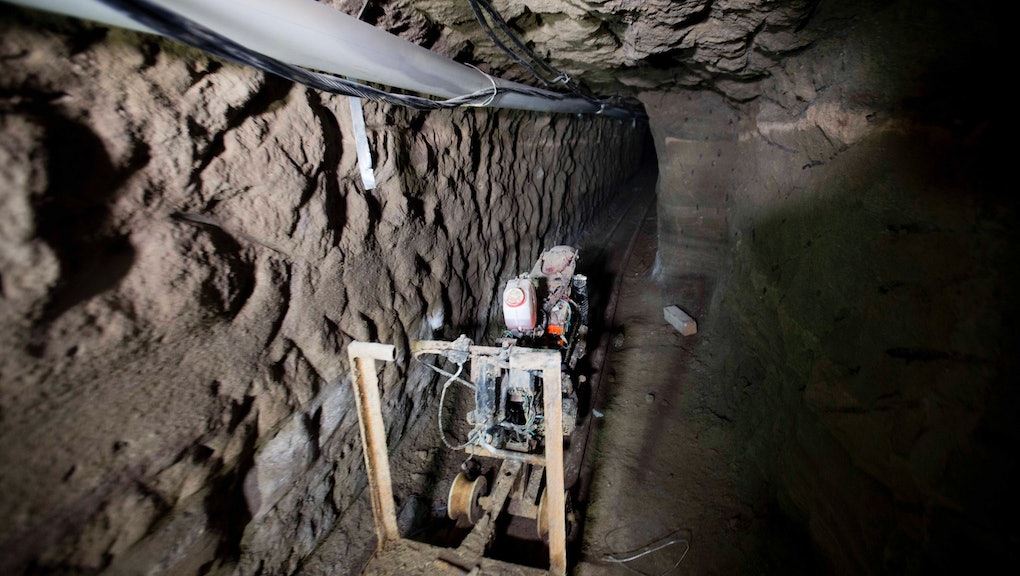 It seems all too easy.

The Mexican government released grainy video footage on Univisión on Tuesday evening appearing to show the moment Mexican drug lord, Joaquin "El Chapo" Guzman, escaped from one of the country's maximum security prisons. His daring breakout over the weekend made international headlines.

From the footage, it appears Guzman exploited a blind spot in his cell's 24-hour surveillance. After pacing around the cell, Guzman walked calmly to the shower and vanished into thin air.

A later investigation indicated that Guzman escaped through an opening in the floor. The hole led to a tunnel and out of the prison.

And what a tunnel is was. Far from crawling through the sewers, the 300-foot deep, mile-long construction was so sophisticated that NBC News said it could have been the work of a professional contractor. The tunnel was reportedly made from two levels, fully ventilated and wide enough for El Chapo to ride a motorcycle through. Experts said that to build it, four people had to work day and night for a year and use 350 trucks to clear out the dirt, MSNBC reported. Since El Chapo was only apprehended last February, the tunnel and escape plans were likely hatched almost immediately upon his arrival in the prison.

For Guzman and his Sinaloa cartel, the tunnel was the only natural choice; the group has achieved distinction in recent years using tunnels to smuggle drugs and cash from Mexico into the United States.

El Chapo's escape — his second from a maximum security facility — is a major blow to the mission of Mexican President Enrique Peña Nieto, who had made catching the drug lord a central part of his effort to curb Mexico's bloody drug wars. Over the last eight years, the violence, much of it attributable to Guzman and Sinaloa, claimed at least 100,000 lives and resulted in roughly 22,000 disappearances.

Despite a vast manhunt the Mexican government launched to recapture El Chapo, the criminal and his allies apparently felt safe enough to boast about the escape on Twitter. An account reportedly linked to Guzman openly taunted Nieto and threatened U.S. Republican presidential frontrunner Donald Trump, who had previously boasted about kicking El Chapo's ass.

"Keep fucking around and I'm going to make sure you eat your fucking words, you fucking white piece of shit," the message roughly reads in Spanish. The message has since been deleted.