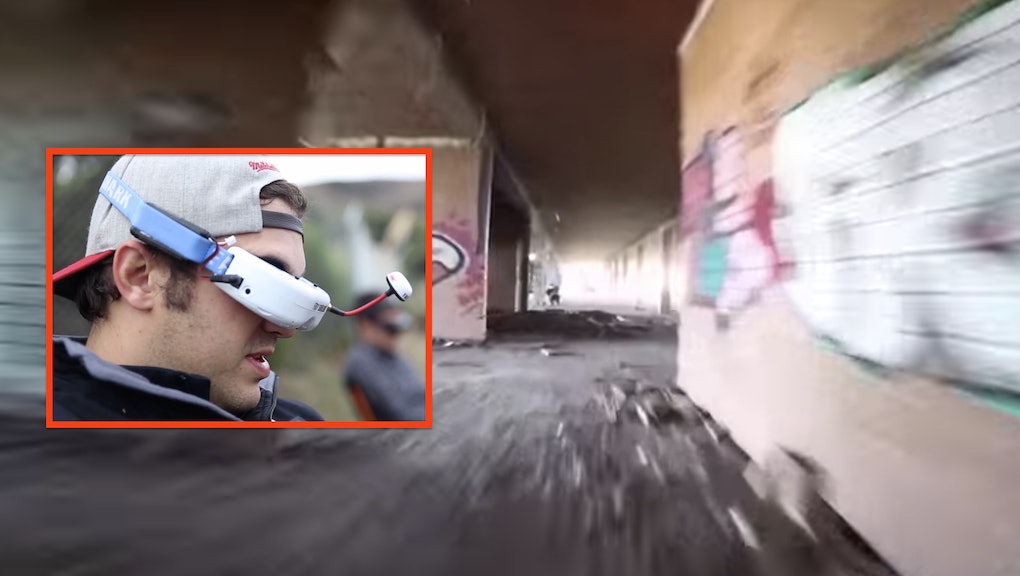 Virtual reality and augmented reality are cool, but they're no match for the best reality of all: old-fashioned, unadulterated reality. The newest trend in tech gaming brings together drones, video gaming and traditional racing competition into a sweet trifecta. It's called FPV drone racing (for "first-person view").

When most people think of small quadcopter drones, they imagine RC cars that fly while you watch from the ground. But these drone racers wear goggles...

The effect reminds people of the podracing scene from Star Wars: Episode I, and rightfully so. FPV drone racing allows you to fly through the air at rapid speeds, as if you were a thimble-sized pilot on the back of the world's fastest drones.

Courses like abandoned buildings, cave systems, bike paths and city parks are bounded only by the imagination — and, eventually, the law.

Racing drones aren't like other quadcopters, made for taking landscape photos or working on farms. Those drones are built to bear loads, not designed for speed and agility — like the difference between a U-Haul and a Ferrari. These drones can dive, tumble, turn on a dime and reach speeds pushing 80 mph.

And the racetracks are everywhere. Unlike street racing, drones don't need a paved road, so courses like abandoned buildings, cave systems, bike paths and city parks are bounded only by the imagination — and, eventually, the law, when the Federal Aviation Administration gets around to rolling out full drone regulations.

Many of the best of YouTube's FPV videos come from Charpu, a French racer who was one of the first great stunt FPV pilots, inspiring a whole class of imitators and fans:

FPV drone racing is the sport of the future. Because of the low price-point — it costs $300 to $400 to have a working, flying drone that you can race — there is a lower barrier for entry. The same way esports are easier to get into and play than traditional field sports, drone racing offers a relatively sedentary thrill available to anyone who wants to buy in, which creates both an enormous potential user base and a potential audience.

So far, FPV drone racing isn't a fully fledged sport. There are dozens of teams and meet-ups, makeshift sets of rules and the occasional get-together or grand experiment. But there's no official league or "NFL of drone racing" yet. There are a few companies moving into that space, like the California-based Game of Drones, but it's far too soon to declare a victor in such a nascent space.

But until we start seeing races live on ESPN — or Twitch, if we're talking about the future of Internet TV — the best destination for gorgeous racing drones is right here on YouTube.