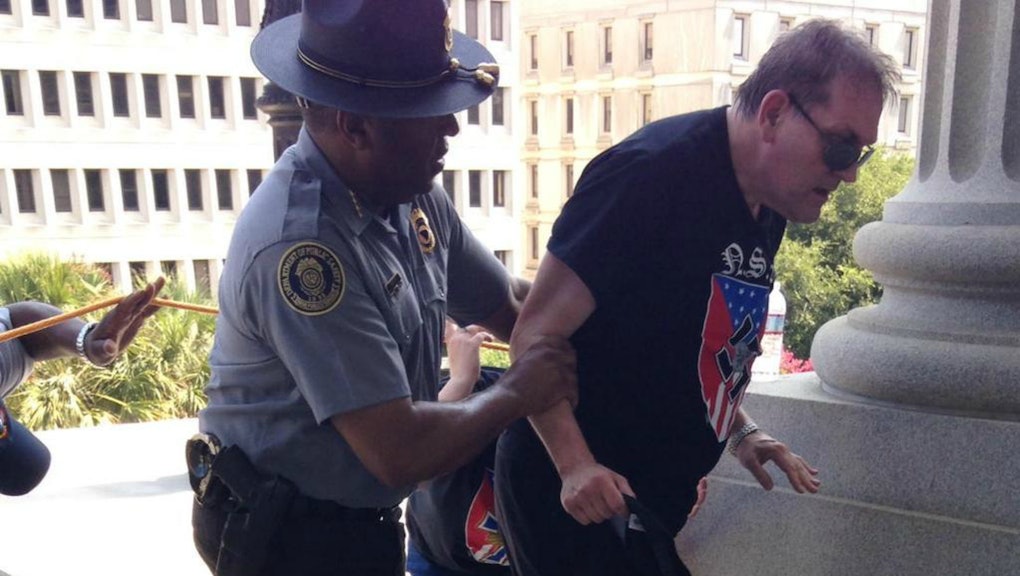 This Powerful Photo Shows a Surprising Moment of Humanity From the S.C. KKK Rally

On Saturday, North Carolina's Loyal White Knights of the Ku Klux Klan took to the steps of the South Carolina Statehouse to protest the state legislature and governor's decision to remove the Confederate battle flag that has flown outside the building since the 1960s.

It wasn't pretty. From taunting black people in the crowd with offensive body language to issuing racial insults and mutual threats of violence, South Carolina would have been better off had the event never happened.

But even amid the ugliness, many showed extreme restraint and conscientiousness — including South Carolina Director of Public Safety Leroy Smith. Photographer Rob Godfrey captured Smith helping a man, who appears to be an elderly member of the white supremacist protest group, to safety amid heat that Weather Underground reports reached up to 95 to 97 degrees Fahrenheit during the time of the protest.

Given the tense mood surrounding the demonstration, it is not surprising that the photo has inspired some pretty strong reactions, ranging from praise to condemnation, as well as questions as to whether Smith should have helped the man in question at all:

It also inspired a few jokes:

Whatever you want to make of the photo, it seems clear that Smith came out of the exchange the bigger person, and the white supremacist diminished.

Mic did not immediately receive a response from the capitol's Bureau of Protective Services to a request for comment.