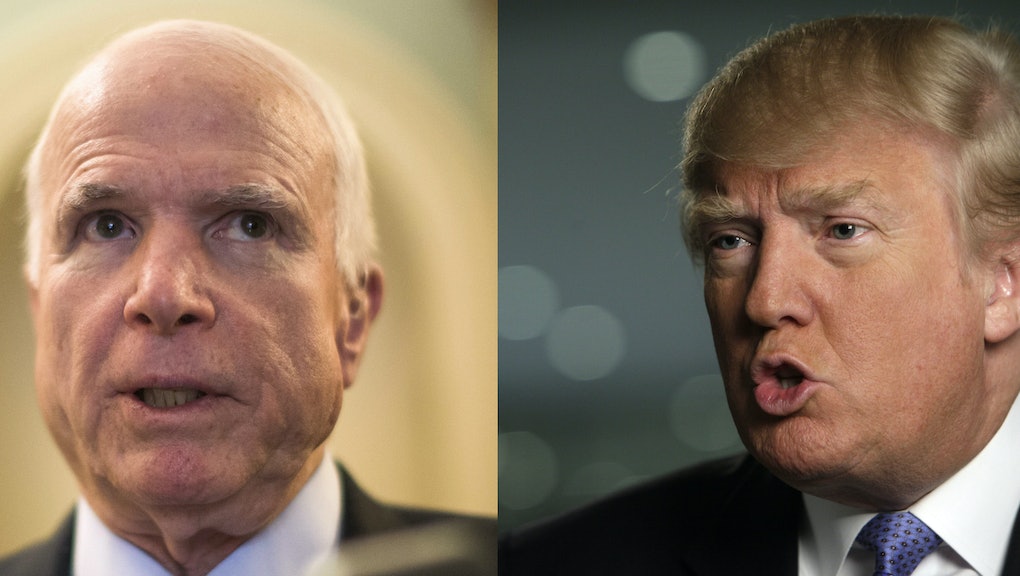 Sen. John McCain (R-Ariz.) is demanding billionaire Republican presidential candidate Donald Trump apologize for comments he made over the weekend when he insinuated McCain, who spent more than five years in a Vietnamese prisoner-of-war camp in the 1960s-1970s, wasn't "a war hero because he was captured. I like people who weren't captured."

But McCain wasn't looking for a personal apology; he wants one for the troops.

On Monday, McCain told MSNBC's Morning Joe he doesn't need a personal apology, "but I think [Trump] may owe an apology to the families of those who have sacrificed in conflict and those who have undergone the prison experience in serving our country."

McCain said he did not consider himself a hero, but did bestow that honorific on other officers and soldiers who had been captured.

"To denigrate [their service] in any way ... is offensive to most of our veterans," McCain added before maintaining he himself wasn't offended. "I put all that behind me. For me to get back in anger at anyone is nonproductive."

"Our country was divided in an almost unprecedented fashion during the Vietnam War," he said. "And when I came home I was shocked. So I have worked ever since to try and heal those wounds."

Trump has been less than fazed by the reaction to his remarks, which have earned him rebukes from senior party figures as well as other GOP presidential candidates, like Rick Perry, Marco Rubio and Jeb Bush. In a USA Today op-ed titled "I don't need to be lectured," Trump dug his trench deeper:

"McCain has abandoned our veterans. I will fight for them," Trump wrote, arguing his respect for veterans was obvious through his record.

"The reality is that John McCain the politician has made America less safe, sent our brave soldiers into wrong-headed foreign adventures, covered up for President Obama with the VA scandal and has spent most of his time in the Senate pushing amnesty," Trump concluded. "He would rather protect the Iraqi border than Arizona's."

Time will tell whether this is the incident that finally cuts Trump's momentum. Prior to his comments this weekend, his campaign started to take a clear lead in the polls, accompanied by rising favorability ratings among Republican voters.

Watch McCain's interview on MSBNC below: