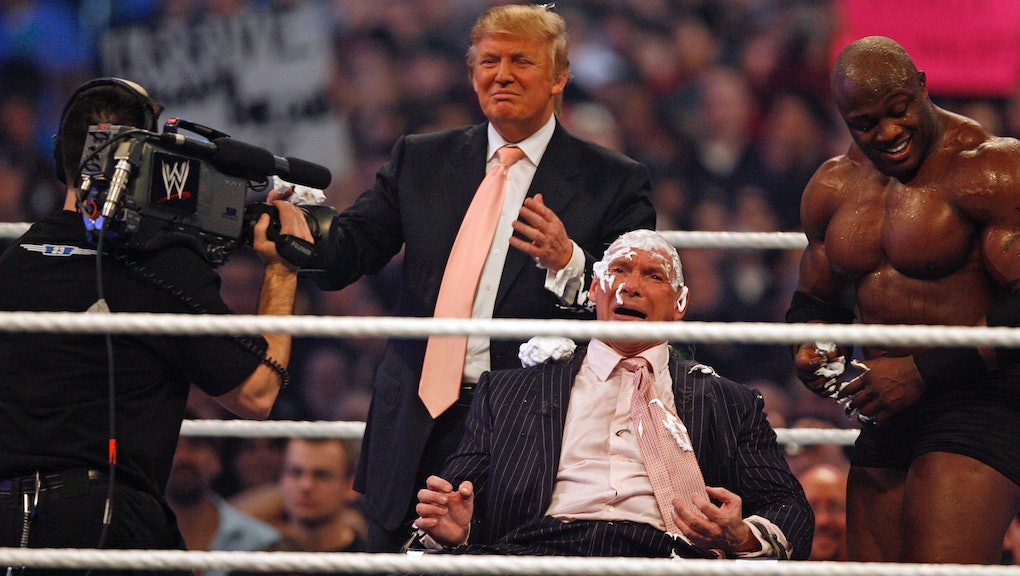 Say what you want about Republican presidential candidate Donald Trump, but he's an effective showman. While his speeches might be incoherent, his platform vague and his chances of success very low,  the real-estate billionaire has nonetheless imposed his larger-than-life persona to great effect on GOP primary voters.

But well before he entered politics, Trump was bringing his showmanship to a very different audience: pro wrestling fans. Two separate WrestleMania events took place in the Atlantic City Trump Plaza, and the Donald himself appeared in at least five WWE events, earning him a spot in the WWE Hall of Fame.

Here are five lessons on showmanship Trump might have learned from his WWE days, which could work just as well on Republican primary voters as they did WrestleMania ticket holders.

Trump doesn't make casual entrances. He knows that part of building up audiences' expectations is getting onto the stage with more than a little flair.

Here's how Trump made his entrance at the 2013 Battle of the Billionaires, where he bet on a match against a fighter favored by WWE promoter Vince McMahon:

Now here's how Trump entered his campaign announcement at the lavishly decorated Trump Tower, descending down an escalator to the tune of Neil Young's "Rockin' in the Free World":

2. Appeal to your audience's need for validation

This is, of course, nothing new to electoral politics. But while most candidates try not to lay it on too thick, Trump sometimes gives speeches that feel like extended paeans to how smart he and his audience are. Trump uses this tactic to pump up his crowds, who are partially there for the self-congratulatory rhetoric Trump offers to them by the truckload.

Here's another Battle of the Billionaires exchange between McMahon and Trump:

Compare that to this clip from a recent Trump speech in Phoenix, in which Trump says that he and his audience are "really smart":

The audience and context might be different, but Trump knows that the easiest way to woo a crowd is to tell them what they want to hear.

Trump's wealth isn't just a backstory. It's been a more or less constant part of the Trump phenomenon, something he brings up at every opportunity to dazzle or impress — and as a way of insinuating that his less financially successful opponents simply aren't competent at what they do.

In this exchange during a 2007 Raw event, Trump told McMahon that he didn't understand what his audience wanted.

So, true to form, Trump showered the arena in "thousands" of dollars in real money.

In a later WWE retrospective, Trump laid out his very simple reasoning:

As it turns out, making the fans feel like they are sharing in Trump's largesse is a key component of the candidate's stage presence. When primary voters turn out in droves to see Trump on stage, a certain degree of envy is part of the appeal. Take this segment from his campaign announcement:

Trump's audiences are assured that all problems with the country are simply a matter of putting someone rich enough in charge:

Trump uses his own wealth as a way to play on the anxiety of working-class voters, offering them the chance to live vicariously through his own massive bank account and assuring him his experience with finance will solve all the nation's problems. In a way, this approaches a get-rich-quick confidence scheme, substituting multi-level marketing schemes for the illusion that Trump's prosperity will be shared with the rest of the country.

Trump relishes the opportunity to show his audiences that his opponents are fools, cowards or simply incompetent, but also doesn't want to come across as sadistic. So of course when he won the Battle of the Billionaires, he and McMahon conspired to make the latter's comeuppance look both funny and unpleasant:

Likewise, Trump tries to portray his political attacks as glib observations on the awful state of the world or the haplessness of his enemies. A Trump insult is always jocular ribbing, allowing the audience to laugh at the joke instead of focusing on how mean-spirited the comment is.

For example, when Trump used a CNN interview to defend his infamous comments on how many Mexican immigrants are rapists, he padded his response with a tone of comic disbelief that anyone would question him:

At the recent Family Leadership Summit in Ames, Iowa, this strategy backfired as Trump tried to sneak a smear on Sen. John McCain's (R-Ariz.) military service into the discussion under the cover of a jape:

This crude sense of humor has the added bonus of ensuring that whenever Trump is speaking, his condescending tone makes it sound as though others are beneath him.

5. Don't be afraid to get your hands dirty

Trump might be vastly richer than the rest of us, but he still appreciates the value of handling situations himself rather than delegating. Enjoy this clip of Trump tackling McMahon:

The New York Times previously reported Trump's "seat-of-the-pants" campaign is eschewing the traditional cabal of policy wonks, pollsters and campaign finance experts in favor of a management strategy dictated by his day-to-day whims. The Times says his operation is "built entirely around the instincts and grievances of its unpredictable candidate — and does not rely on a conventional political operation that protects presidential hopefuls from themselves."

But that's the way the Donald rolls, from WWE all the way to what he's convinced is his path to the Oval Office.

WWE declined Mic's request for comment on this story.