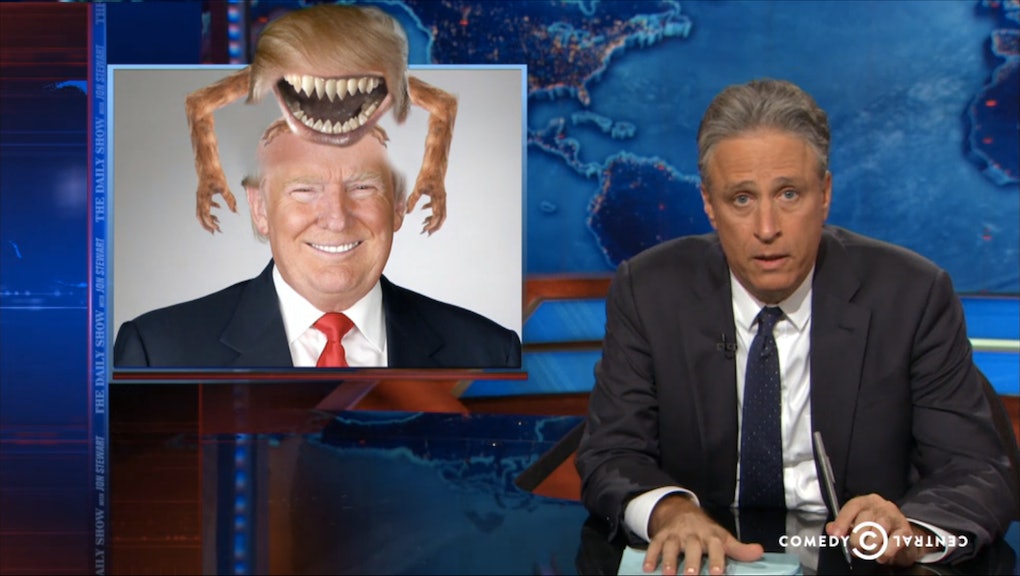 Watch Jon Stewart Destroy Donald Trump Like No One Else Can

Coming back from a two-week vacation, Stewart wasted no time jumping on Trump for his most recent comments accusing Sen. John McCain (R-Ariz.) of not really being a war hero. "He's a war hero because he was captured. I like people who weren't captured," Trump told the Family Leadership Summit in Ames, Iowa, over the weekend.

After the comments, Trump took heat from both the media and — for the first time — the greater Republican establishment. After his comments went viral, most major candidates wasted no time piling on the Donald. McCain meanwhile said he didn't care if Trump apologized to him, but that he should apologize to all veterans.

In response to criticism he often takes the low road by calling his opponents "stupid" or attacking their physical appearance, Trump said he takes it as he gives it, citing his own hair as an example of low-blow media attacks he faces.

On Monday, a Washington Post-ABC News poll showed Trump surging far beyond his rivals with nearly a quarter of the national Republican electorate calling him their preferred candidate. The poll was conducted over the weekend, before news of Trump's comments became widely known. Pollsters, however, found a statistically significant decline in Trump's standing on Sunday, the final day of the survey. While many in the media confidently predicted Trump's Waterloo, it is still far from clear what, if any, effect the McCain gaffe will have in the race.

The conversation around McCain and veterans, however, has been quite different from when Trump accused Mexican immigrants of being rapists and bringing crime and drugs. After he made those disparaging comments, few Republicans were as vocal about their opposition to the billionaire candidate. Pleading requests to Trump to tone it down by Republican National Committee chief Reince Priebus were ignored.

As Stewart noted, the light was seen painfully too late.

Even if his poll standings take a hit, it is still almost certain Trump will feature prominently in the first Republican presidential debate set to take place Aug. 6 in Cleveland.