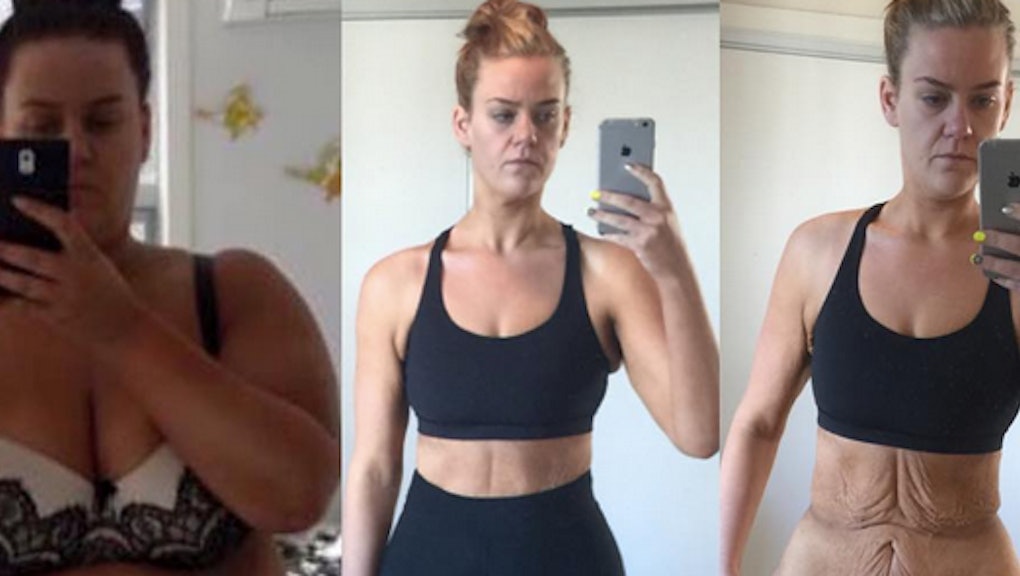 A hair and makeup artist in New Zealand, Anderson has been chronicling her weight loss and fitness journey on Instagram and Facebook since last August.

Last week, she updated her followers with the following side-by-side shot of her progress:

"I am officially half the person I was 11 months ago!" she wrote on Instagram. "From 169kg to 83.85kg, I can't even begin to explain in words what this accomplishment feels like."

Naturally, the picture garnered much positive attention from Anderson's followers. But it also received criticism from trolls who accused the "after" picture of being fake — citing everything from the different shade of her hair to her lack of excess skin as "evidence."

Anderson wasn't having that bullshit. So she followed up with a three-picture post, proving that she had indeed lost a bunch of weight by bravely exposing her excess skin, which is a normal problem for many who have experienced extreme weight loss. (John Burton, a Manchester, U.K., man who recently lost 250 pounds, made a similar point when he posted a photo of himself shirtless on Reddit, in which he proudly flaunts his excess skin.)

"Throughout my whole journey I have tried to be so honest about the whole experience and tell people it exactly as it's happened so to be called a fake hurt a lot," she wrote in the caption for her Instagram post. "Yes I have lose [sic] skin and stretch marks but I don't feel the need to show them in every single photo I post online, I have shared my excess skin picture before so if you had bothered to click on my page you would have seen it."

Anderson also addressed those who had nitpicked about her hair color, writing: "Yes my hair and eyebrows are a different colour as I'm going back to blonde." Hair dye is a thing, people.

Seeing Anderson open up about a side effect of extreme weight loss that we don't typically see on Instagram and on shows like The Biggest Loser is inspiring. But it's also inspiring to see her letting haters know that she's a real person with real imperfections, who has zero apologies for those who aren't there to support her.

The 24-year-old is raising funds for surgery to remove her excess skin. She has 106 donors and counting.