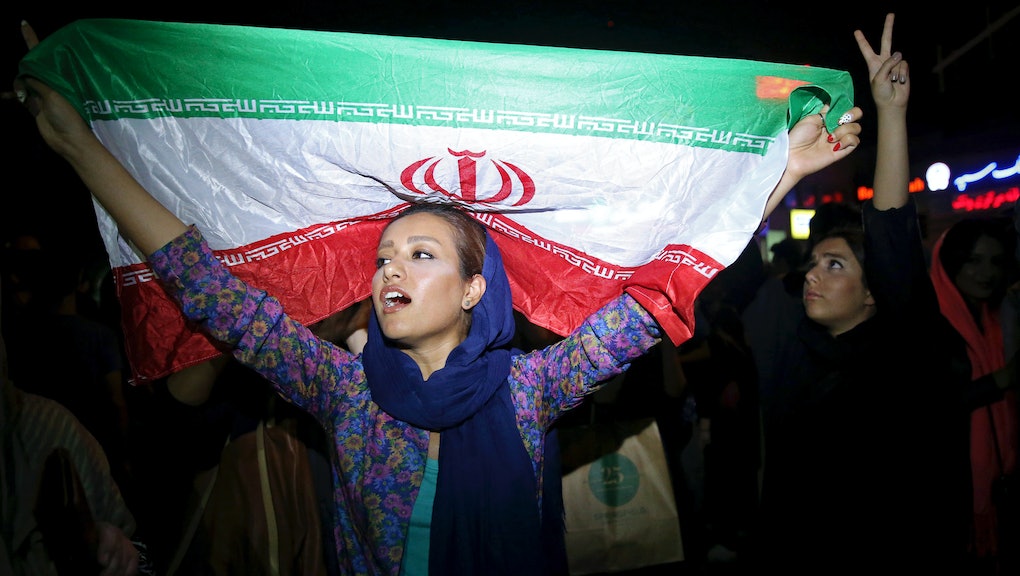 When most people think of Iran, they think of a strictly Islamic nation that stifles freedom of speech, especially for minorities and women. But Iran is home to a vibrant feminist movement, even if it must remain low-key to avoid retaliation.

Nina Ansary, a scholar and Iranian in self-imposed exile, made it her mission to expose the world to this side of a complicated country often misrepresented in the media. In her debut book, Jewels of Allah: The Untold Story of Women in Iran, Ansary examines the country's feminist heroes over the past few centuries.

"The narrative of Iran and the history of my country came mostly from Western media," Ansary told Mic. "When I delved into the movement of women's rights I realized how little I knew." Ansary said she believed if even she was miseducated on the topic, the rest of the world might be too — which is what prompted her to write the book.

"The women I discovered are fearless, highly educated and don't allow these discriminatory laws as hindrances in their lives," she said. "One of the biggest misconceptions is that there isn't a women's rights movement post-revolution. Instead, you think of a patriarchal regime." And while that may be true, it is also the breeding ground for "one of the most vibrant feminist movements in the Middle East," Ansary notes.

Ansary's book captures the struggle of living in a country where the following women refuse to let gender-based, discriminatory laws and attitudes defeat them.

This 20-year-old athlete trained for six years in swimming to participate in the 2012 Olympics. But when the Iranian government told her she was not allowed to compete in a bathing suit on the world stage, she refused to give up. Instead she took up kayaking and trained herself until she was good enough to qualify for the same Olympics in the "Canoe/Kayak Flatwater" category. Hakimimoghaddam came seventh in her heat for the K-1 200M race.

In 2014, this 29-year-old social activist and cartoonist drew a picture of Iranian parliamentarians as monkeys and goats in response to their decision to ban birth control and heavily limit contraception. After she published her cartoon, 12 Revolutionary Guards forcibly removed her from her home by blindfolding her and taking her to prison.

In June, Tehran's Revolutionary Court sentenced Farghadani to more than 12 years in prison in response to her drawing. She was charged with "spreading propaganda against the system" and "insulting members of parliament through paintings," according to Amnesty International's urgent case file on the activist. Furthermore, Farghadani was charged in July with an "illegitimate sexual relationship short of adultery" and "indecent conduct" for shaking her male lawyers hand in jail, the Daily Mail reported.

Despite knowing the risks associated with publishing such politically charged artwork, Farghadani took the risk anyway in defense of freedom of expression and political plurality. And now she is heavily paying the price.

If you remember seeing images of Iranian women defiantly not wearing their hijabs, Alinejad is the woman to thank. Alinejad was a journalist in Iran and has been in self-imposed exile since 2009 for her own protection. She launched My Stealthy Freedom in May 2014, a social media campaign in which women in Iran post pictures of themselves not wearing the legally mandated hijab, or headscarf, in protest. The movement gained traction around the world with more than 863,000 likes on the Facebook page.

In response, the Iranian government launched a smear campaign, painting Alinejad as a troubled victim of gang rape and a drug addict. However, she was recognized for her contribution by the international community and received a women's rights award from the Geneva Summit for Human Rights and Democracy. The journalist continues her activism from abroad, first from London and now from Brooklyn, New York.

After attempting to simply attend a men's volleyball match in Tehran in June 2014, the 26-year-old was sentenced to a year in jail for disseminating propaganda against the state. She served five months before being released from prison in November 2014 after posting around $30,000 in bail. The Court of Appeal eventually pardoned Ghavami due to mounting international pressure, but the state has still imposed a travel ban on her and she is unable to leave the country.

This courageous journalist founded women's magazine Zanan "because she felt mainstream journalism was ignoring serious coverage of women's rights in Iran. It was the first independent journal to focus on women's issues after the 1979 Iranian Revolution," the International Women's Media Foundation explained upon selecting her for the 2005 Courage in Journalism Award.

Sherkat ran the magazine for 16 years before former President Mahmoud Ahmadinejad shut it down. Under the new leadership of President Hassan Rouhani, she attempted to publish a new iteration of her women's publication, entitled Zanan-e Emruz. However, Sherkat was called to appear before the Press Court in September 2014 and the publication was ultimately suspended for writing about (therefore promoting) the idea of unmarried couples living together, reports the International Campaign for Human Rights in Iran.

As for what the outside world can do to support these women, the "collective voice makes all the difference," Ansary told Mic. "Likeminded people find each other. What they can do is give their sisters in Iran a voice, I cannot stress this enough. Women on the outside, as well as men... I cannot emphasize how much they can make a difference by giving these women a voice."