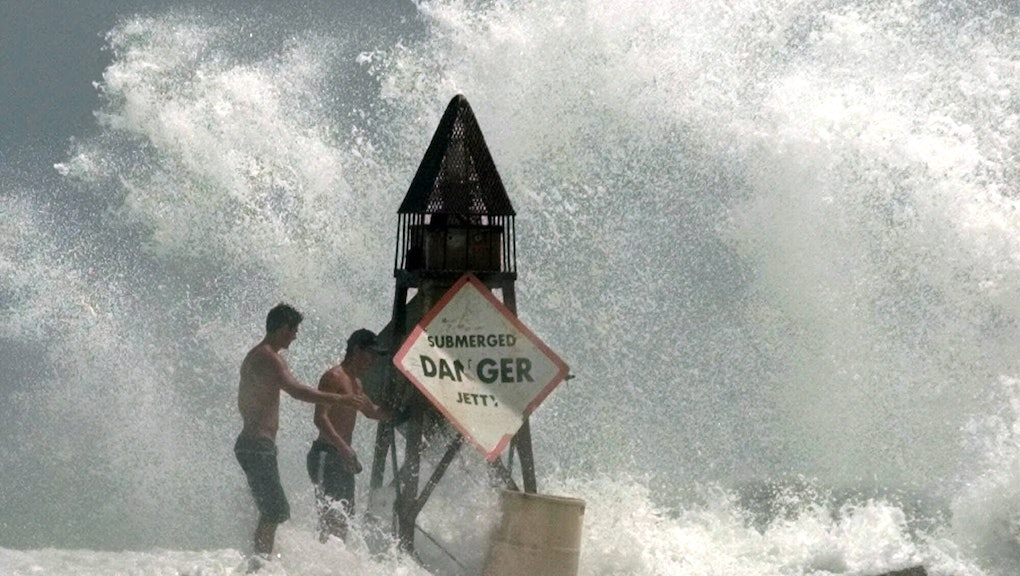 The planet Earth might be headed for climate disaster a lot sooner than most people think, according to a potentially groundbreaking new study from renowned Columbia University and former NASA researcher James Hansen.

Hansen's research used paleoclimate data from eras far in the past and concluded sea levels across Earth have historically been much higher during epochs with only slightly warmer global temperatures than today. Instead of the extra 1.5 feet of seawater the International Panel on Climate Change believes will result from an average global temperature rise of 2 degrees Celsius, Hansen thinks it will be more like 10 feet or more.

The science: University of St. Thomas School of Engineering thermal and fluid sciences expert John P. Abraham told Mic that Hansen's study, which combines paleoclimatic and contemporary data with computer models, found "dramatic ice loss from Antarctica can occur very quickly by complex processes. For instance, warming of ocean waters near the ice sheet can cause dramatic losses in the ice which then melts and flows into the oceans. So, in a certain sense, this is melting from below, rather than melting from above."

The paper argues the rate of ice loss from West Antarctica may double about a decade from now. According to Hansen, linear estimates of rising sea levels, such as the consensus viewpoint reached by the IPCC, are much too conservative, and Earth's denizens could be dealing with 10-foot sea level rise within the next 50 to 200 years. As such, the paper concludes the 2 degrees Celsius warming limit recommended by the IPCC is "highly dangerous."

"We conclude that continued high emissions will make multi-meter sea level rise practically unavoidable and likely to occur this century," Hansen writes in his paper. "It is not difficult to imagine that conflicts arising from forced migrations and economic collapse might make the planet ungovernable, threatening the fabric of civilization."

But come on, isn't this a little alarmist? Perhaps a little. Hansen's study is in some ways a worst-case scenario story, and assumes ice loss in Antarctica (and on a lesser scale, Greenland) will continue to accelerate on timetables that some scientists dispute. It also relies on projections scientists currently lack the technical ability to evaluate on a probabilistic basis.

In an email to Mic, Princeton University geosciences expert Michael Oppenheimer called the analysis "clever" but "inherently speculative," noting the paper contained "no analysis of the probability of these outcomes versus others." More critical was the USA National Center for Atmospheric Research's Kevin E. Trenberth, who wrote to Mic, "there are way too many assumptions and extrapolations for anything here to be taken seriously other than to promote further studies."

Still, prominent climate scientists agreed Hansen is highlighting issues of serious concern. Pennsylvania State University geoscientist Richard Alley told Mic via email Hansen's paper was "interesting and important," and captured "the lopsided nature of what we don't know about sea-level rise, with the most-likely IPCC estimate well on the optimistic low-rise side of the possible outcomes."

Alley's colleague, Michael E. Mann, concurred, writing to Mic while he was "skeptical about some of the specifics," the article was a "sobering wakeup call to those who still dispute the threat posed by our ongoing burning of fossil fuels."

Ten-foot sea level rise is a big deal: As the Globe and Mail recently reported, even a 6-foot sea level rise would leave huge stretches of South Florida practically uninhabitable, including submerging more than half of Miami-Dade County underwater. Across the country at large, this level of sea rise would put the homes of more than 12.3 million Americans under water, in addition to exposing countless millions more to storm surges and extreme weather-related damages.

More broadly, Climate Central estimates more than half the area of 40 large U.S. cities is within 10 feet of current high tide levels. An extra 10 feet of ocean could endanger and displace hundreds of millions across the world.

Humanity doesn't "have much time to stay below the critical temperature thresholds that these authors have found," Abraham writes. "One hundred fifty million people across the globe live within 3 feet of sea level rise. How many more live within 16 feet? The cost of social upheaval and destroyed infrastructure will be enormous."