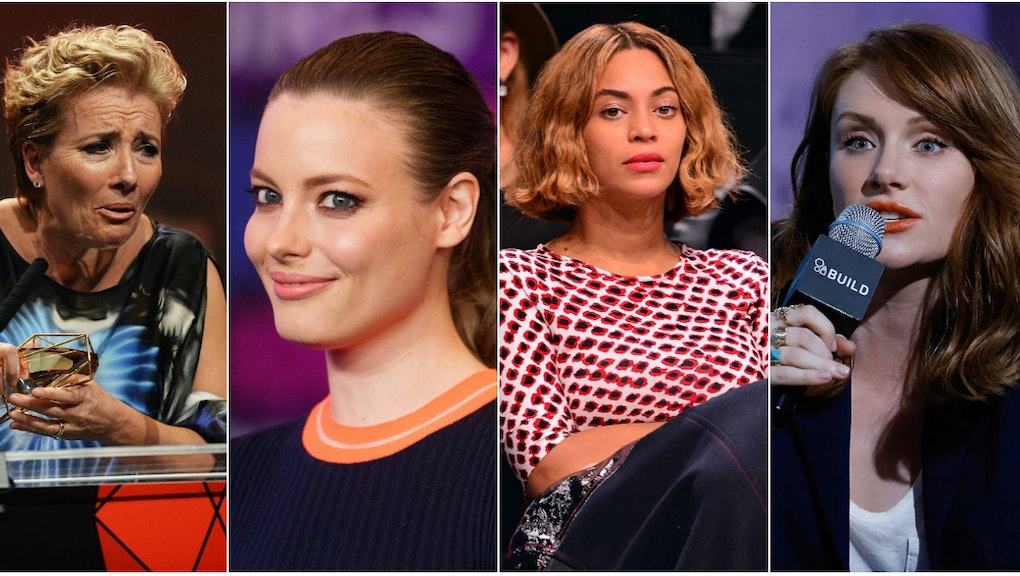 These Kickass Women Said What We're Thinking About High Heels

It's telling that when one of the biggest, most successful action movies of the summer hit theaters, the conversation wasn't about the special effects or acting or plot twists. It was about the shoes.

Our relationship with heels is as treacherous as the task of walking in them. Some women swear by them ("I just can't concentrate in flats," professional stiletto-wearer Victoria Beckham once said). They can make us feel powerful or professional, or more grown-up. They may even help some women feel attractive to men (if you believe evolutionary psychology or care about that sort of thing).

But for plenty of other women, those benefits are outweighed by a painful reality: Heels suck. Any doctor can confirm the suckage, including the potential for ankle injury, tendon damage, pinched nerves, aching and something terrible-sounding called metatarsalgia. Plus, believe it or not, there are women who don't care whether men find them attractive based on their gait, nor feel the urge to fit a beauty standard reaffirmed by a plastic doll.

And they don't need to. Just take it from these famous women, all of whom have expressed their dislike for heels — even if they do wear them occasionally. Hey, when it comes to women and shoes: It's complicated.

Emma Thompson: "I've taken my heels off as a feminist statement."

The British actress might be the best, funniest anti-heels advocate we have. And she makes no secret about framing her heel hate as a pushback against male-created beauty standards, as she reminded the audience at the National Board of Review awards gala in 2014.

The tyranny of heels is due, in part, to an unspoken agreement that heels are the expected shoe for certain occasions. Film festivals like Cannes are one of those events, as we found out this year when several women were turned away from screenings for wearing flats. #HeelGate prompted actress Emily Blunt to point out that we really should be free to wear what we prefer, not what's implicitly expected of us.

Most of us are freed from the days of school uniforms, and plenty of us have jobs that don't come with a strict dress code. That means we're free to dress comfortably — and comfortable, as actress Ashley Benson pointed out to Glamour in 2013, isn't a bad thing.

Why are so many people hesitant to admit when something they're wearing is very, very painful? (Spanx, anyone?) Thankfully, we've got heroes like Jacobs to call a spade a spade, as she did to Paste magazine in 2010.

Sarah Jessica Parker: "[My feet] were like, 'You know what, we are really tired, can you just stop?'"

Even a shoe devotee like Carrie Bradshaw can admit that there are times when heels are the ideal option, and moments you're just ready to give them up. Parker told The Edit back in 2013 that after years of Sex and the City, her feet had enough. Sometimes, like the rest of our wardrobes, our shoe tastes simply evolve.

Kristen Stewart: "Dude, I can do it for about three minutes."

All those women walking around with self-assured strides in stilettos? Not all of them are as confident as they look. Kristen Stewart told Patti Smith in Interview that all those heels she's wearing on red carpets stay on for photographs, then come promptly off.

Rihanna: "I hate partying... I don't like standing in my heels for hours."

You stand perfectly still in the mirror, adoring your heel choice. Ten minutes later, you've taken enough steps to realize they were a terrible idea. Even Riri can admit that the difference between how heels look and feel can make them practically unwearable, as she told radio host Alan Carr in 2013, according to Us Weekly.

Bryce Dallas Howard: "[There are] women who say they walk so much better in heels. I'm absolutely not one of those women."

For people who love sporting heels, it may be a part of their identity. But for those who don't love heels, that can be an equal piece of their self-image and who they are. Just ask Bryce Dallas Howard, whose Jurassic World character was, for better or for worse, defined by her heels — while Bryce told the Daily Beast she sees herself as anything but.

Lawrence's words (to a USA Today reporter in 2012), not ours. But when heels are truly agonizing and toe-pinching, physically excruciating and mentally trying, they tend to feel like torture devices created by someone as evil as... well, Satan.

Jennifer Aniston: "We don't always have our high heels on."

Even for women who feel most beautiful and confident in heels, it's a look that, at some point falls away when we embrace our natural selves. As Aniston told Vanity Fair in 2014, we're not always our most put-together. But we should be able to feel beautiful in those pared-down, heel-free moments too.

Beyoncé: "These [flats] are really sexy."

Sometimes we choose heels because we believe they are undoubtedly the sexiest of our shoe choices. But that assumption may be based on long-standing stereotypes and even false assumptions about what others (namely, men) find attractive. But Beyoncé knows better, as she told People in 2012, in part because of Jay-Z's flats appreciation and in part because she became a mom and discovered this crazy thing called comfort.

This article was originally published on July 30, 2015