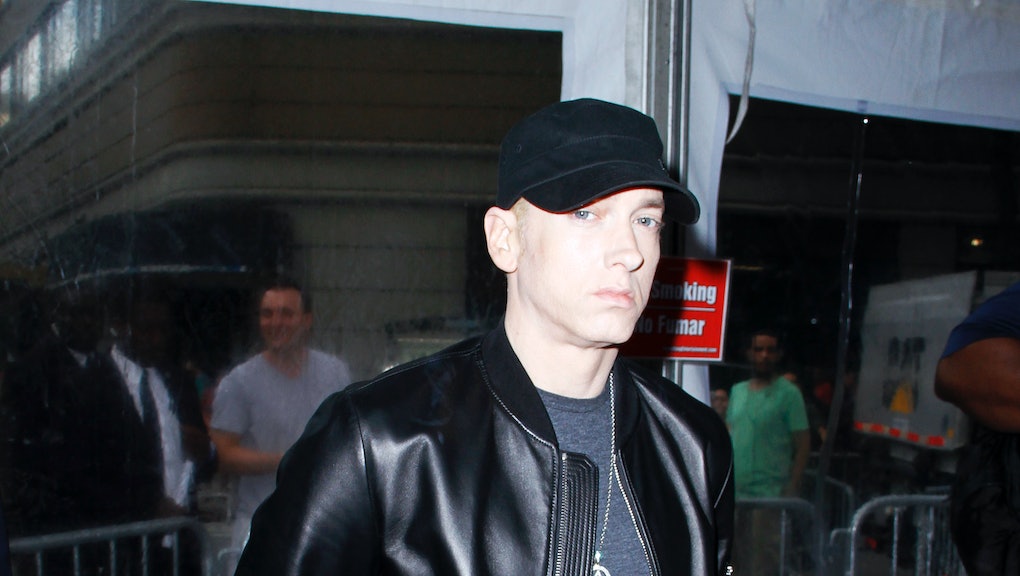 On Thursday, 42-year-old shock jock rapper Eminem reamed his latest crop of celebrities in a six-minute freestyle on the Sway in the Morning radio show. He tore into Donald Trump, Bill Cosby and Hillary Clinton, among others, and he directed perhaps most vitriolic attack toward Caitlyn Jenner. It seems when their careers are ailing, sick men don't stray from the hate they know.

"I see the bitch in you Caitlyn," Eminem rapped. "Keep the pistol tucked like Bruce Jenner's dick." He then offered a half-assed apology, getting one more transphobic genitalia-mention in there: "No disrespect though, not at all, no pun intended, that took a lot of balls."

It's far from the most brutal attack Jenner has received, and it's definitely not the least expected. Jenner is a tempting target for Eminem. By attacking her, he can flex misogyny and transphobia in a single line, stirring up the hate of an entire community that wants to see Jenner succeed.

Of course, that didn't keep the rapper from targeting a few other figures with famously outspoken followings. A certain billionaire presidential candidate got a call-out: "I'm fucked worse than Donald Trump / On Lexapro in Mexico across from a Texaco in a McDonald's drunk." Eminem also made a flattering comparison between himself and Bill Cosby. "I made monopoly off misogyny," he spat, "Sodomy, how many chocolatey Jell-O pops can he possibly lace, walking atrocity / No wonder you scoff at me, it's obvious I'm as off-putting as Bill Cosby is."

Eminem ended his freestyle with an explanation of why he has the right to say these kinds of things. "I just say shit to say it," he told Sway. "It's very rarely personal. If it was personal, somebody would know. It's all in fun."

Transphobic threats are never fun. Jenner's life has been repeatedly threatened since she revealed herself to the world. But where Jenner will thrive and continue to make the trans struggle visible and human, Eminem will fade into obscurity — a perpetual reminder of how ugly the early 2000s could be.