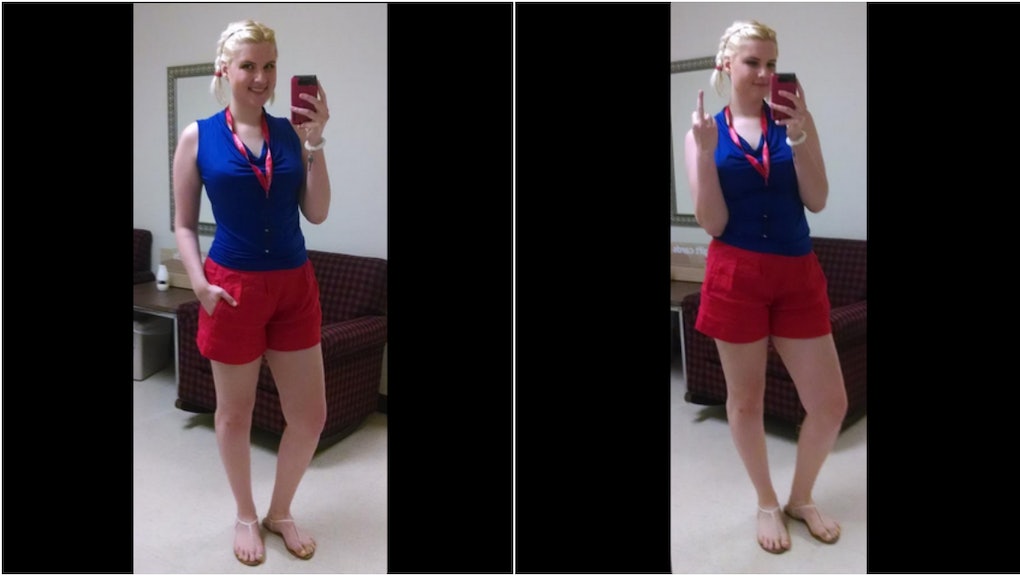 We hereby present the problem with women's dress codes, in one tweet.

On Friday, a young woman tweeted a photo of herself in an outfit that apparently got her sent home from her JCPenney retail job. Her red shorts, she wrote, were deemed "too revealing" by her boss — which came as a surprise, seeing as she bought them in the career section of JCPenney.

The boss was barking up the wrong tree. The employee was Sylva Stoel, a feminist blogger who tweets under @queenfeminist and aims to "dish out body positivity, girl power and everything queer." Stoel was quick to call out her boss on Twitter, followed by a tweet calling out @jcpenney.

"The only word the manager said on dress code during my job orientation was that denim was not allowed, t-shirts were unacceptable, spaghetti-strap tank tops weren't allowed and skirts couldn't be 'too short,'" Stoel told Mic via email. "But I was never warned that wearing linen shorts to work could get me sent home."

Moreover, Stoel told Mic, plenty of her fellow employees wear jeans and tees to work. "Unfortunately for me, it seems as [if] my exposed knees registered as more unprofessional than jeans and a t-shirt."

As the response to Stoel's tweets confirm, the experience of being chastised for "too revealing" clothes is all-too familiar for plenty of women. In both in workplaces and in schools, more women are pushing back against dress codes that they argue unfairly target them, reduce them to sexual objects and shame them for their bodies.

The battle has been especially prevalent at high schools, where girls are having to defend fashion choices like crop tops for reportedly being "sexual or provocative."

The double standard governing women's bodies: The critique of high school students was echoed by Stoel's boss, when he claimed her shorts were "too revealing" — despite the fact that they were purchased, amazingly, from JCPenney's own career section. (Mic has reached out to JCPenney and has not heard back.)

The irony underscores how arbitrary such "dress codes" can be: When a woman's clothes make a man uncomfortable or are deemed "revealing" by male onlookers, that's when they're prohibited.

That standard, Stoel and many other women argue, is based on fundamentally flawed assumptions about women's bodies and male responsibility.

"I think the most detrimental thing about dress codes that specifically target women is that they are often defending the idea that women must dress in a way that doesn't provoke or distract men. This reasoning impossibly casts the woman as both the offender and the victim when they have done nothing wrong," Stoel told Mic. That attitude, Stoel said, promotes rape culture.

Luckily, it's a message being heard loud and clear, across high schools, offices and even court rooms, thanks in no small part to social media.

"I could've lectured [my boss] on feminist theory with an emphasis on body-shaming, but I doubted that my speech would be appreciated," Stoel noted. "So, I saved that bit for Twitter."