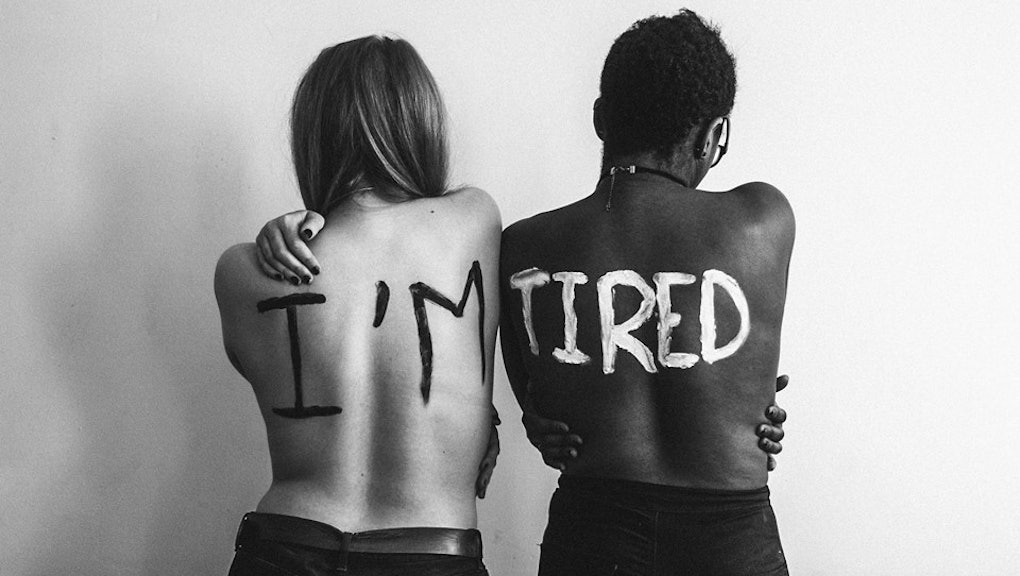 "I am tired of a society that encourages me to feel uncomfortable in my own skin."

"I'm tired of my feelings being regarded as simply a consequence of my race."

"I am tired of succumbing to feelings of shame."

These and other experiences are featured in the "I'm Tired" Project, a series of photos that highlight the impact of common microaggressions and stereotypes many people face on a regular basis, and just how exhausting dealing with them can be. The subjects symbolically carry the damaging sentiments they've each encountered on their backs — a placement that offers subjects "anonymity whilst also promoting the idea that we are labelled by society in similar fashions," project co-founders Paula Akpan and Harriet Evans told Mic in an email.

The founders say they want this process to be cathartic for participants while educating others who commonly — but perhaps unintentionally — perpetuate these stereotypes. Evans and Akpan say they have personally learned that these small but significant messages are rarely "intentionally malicious or seeking to alienate," but rather stem "from people not understanding the powerful impact of seemingly harmless words," they told Mic in an email.

No matter the specific aspect of one's identity being targeted, the founders realized, most people have a common reaction: Exhaustion. This tiredness is the result of constant self-evaluation and social interactions tinged by microaggressions.

"An individual's environment is crucial in terms of how they end up viewing themselves and valuing their worth within society, which can lead to a lot of questioning and self-moderating," they told Mic. "For example, while being black and being angry are two very separate things, the stereotype of the 'black angry woman' may lead to a black woman consciously making sure she doesn't appear 'too angry' or 'too argumentative,' something which would have probably never occurred to her without external societal pressures."

Akpan and Evans said they want people to understand how and why their subjects and those with similar experiences might respond to microaggressions with anger. Individuals who constantly face these stereotypes may begin to lack patience with feeling forced "to be strong and resilient against these methods of alienation," they said.

Derald Wing Sue, author of Racial Microaggressions in Everyday Life: Race, Gender, and Sexual Orientation, said the toll of this experience can have widespread effects. "The burden of constant vigilance drains and saps psychological and spiritual energies of targets and contributes to chronic fatigue and a feeling of racial frustration and anger," Sue wrote in Psychology Today. These actions also have detrimental effects on recipients' mental health and perpetuate other forms of inequality in society at large, Sue added.

Ultimately, Akpan and Evans said these photos will "open an individual's eyes to the struggles faced by others and make them possibly rethink the discourse they use or the way they view certain individuals and social groups."