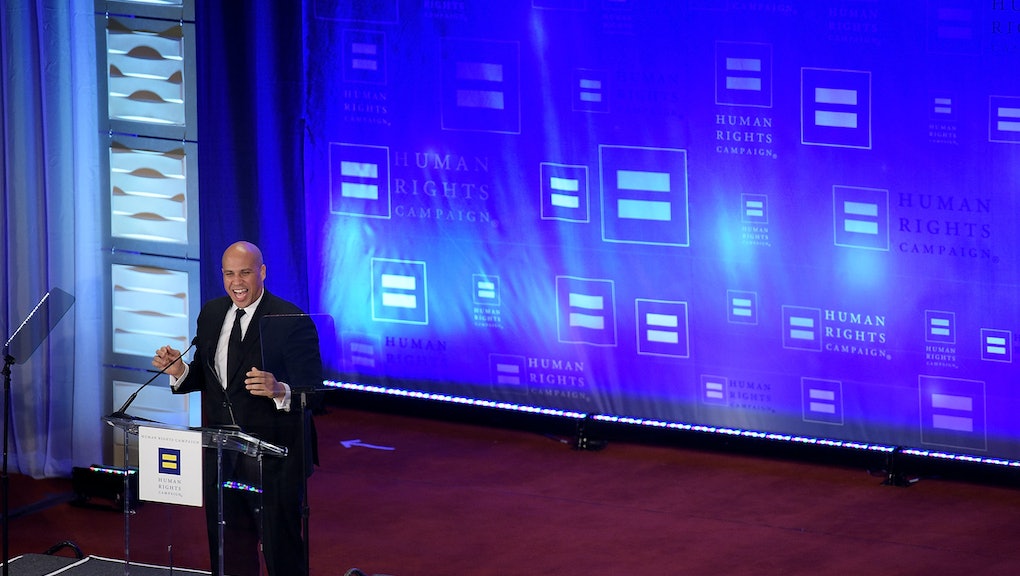 Sen. Cory Booker: The Equality Act Is a Huge Step Forward for America

Almost 50 years ago, a couple tried to purchase a home in suburban New Jersey in a neighborhood they loved, but found their efforts thwarted when the house they wanted was inexplicably pulled off the market. The couple later learned from fair housing advocates who had investigated on their behalf that the home was made unavailable to them because of their skin color.

The couple's names were Cary and Carolyn Booker. They were my parents.

You'd think this problem is relegated to the history books. But in 2015 — today — a couple can try to purchase a home and in 31 states be told it is not available to them on the basis of their sexual orientation.

More than half a century after the passage of the Civil Rights Act of 1964, the federal government has yet to pass a large-scale law that protects Americans from discrimination on the basis of their sexual orientation or gender identity.

It's time for that to change.

Friday, I joined Sens. Jeff Merkley, Tammy Baldwin and Reps. David Cicilline and John Lewis — a civil rights pioneer in his own right — to introduce the Equality Act. This legislation will affirm the civil rights of lesbian, gay, bisexual and transgender Americans and protect them from discrimination when it comes to things as fundamental as buying a house, getting a student loan and getting or keeping a job.

It is unacceptable that in 2015, in the United States, an individual could be fired from his or her job, a family could be kicked out of a movie theater or a couple denied a mortgage on the basis of their sexual orientation or gender identity. It is unacceptable that lesbian, gay, bisexual and transgender Americans are not fully protected from discrimination under federal law.

The landmark Civil Rights Act of 1964, the Fair Housing Act and the Equal Credit Opportunity Act took the steps needed to ensure basic federal protections from discrimination in employment, education, public accommodations, housing and credit access on the basis of race, religion, sex or national origin.

It's time that we build upon that historic work and extend federal nondiscrimination law to protect all Americans. The majority of the country agrees: Two-thirds of Americans support the passage of a sweeping federal nondiscrimination law on the basis of sexual orientation, and 98% of the top 50 Fortune 500 companies have already put protections in place for LGBT employees.

The Equality Act will expand upon and strengthen the civil rights successes that so many courageous Americans fought for. The civil rights movement in America is not a relic of history, it is a constant exercise in making our nation more perfect and more just. Today, the work continues.