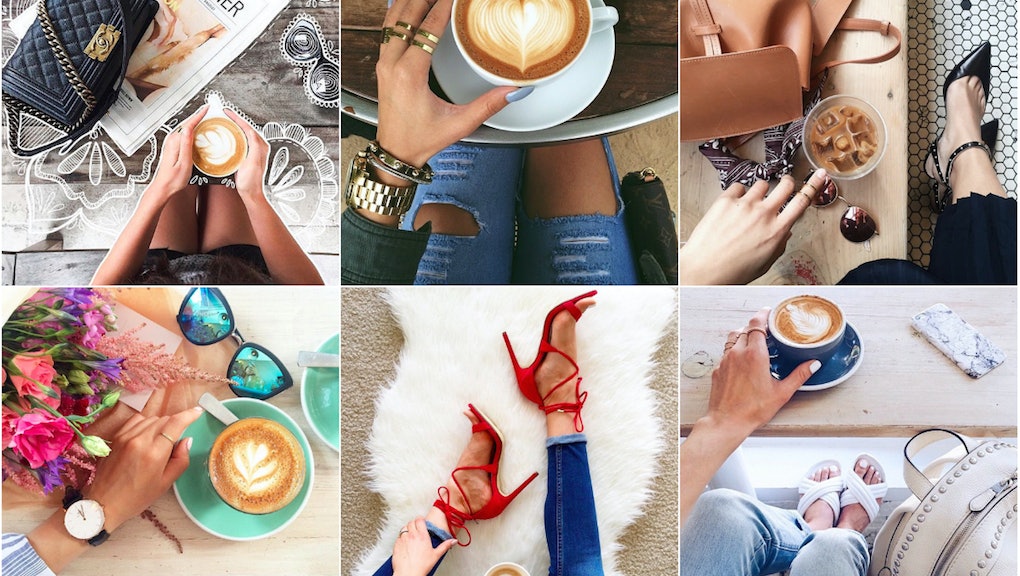 Let's Be Honest, This Is Really Why We Love Coffee So Much

Fashion trends, by definition, come and go with the seasons. You can tell it's summer by the Birkenstocks sandals on someone's feet, or that it's winter by the Canada Goose jacket on their backs.

Or, you could just check their hands.

Coffee has arguably become the most durable and popular accessory, a "trend" that, like any other fad, indeed signals the seasons. (Iced coffee is basically a season unto itself.) And it's more than just a weather forecaster — the cups we carry become an extension of our selves, signaling our tastes and aesthetics as much as our watches, shoes or bags.

In all its variations, coffee presents us with yet another opportunity for constructing an ideal image of our lives. And as with our other possessions, we're all too eager to share that image online.

When carrying a cup signals status: Coffee has fluctuated as a status symbol over time, from its heyday as a drink of the 18th-century European elite to a mass-produced item in supermarkets, according to David Dubois, an assistant professor of marketing at Insead, a business school in France.

But constant moves to differentiate the product have helped build up its modern appeal, Dubois told Mic, including the rise of Starbucks and pricey specialty drinks like cappuccinos and macchiatos. Pair that with the coinciding rise of the to-go cup, and Starbucks' fancy drinks helped make coffee a nationwide trend — and the cups a status symbol.

Amplify that with tabloid coverage of celebrities like Mary-Kate and Ashley Olsen, regularly photographed in the early 2000s walking the streets of New York in oversized boho clothes, venti Starbucks cups in hand. As Hollie McKay at Fox News wrote in 2007, "Handbags and headbands may be chic, but if you really want to be a Hollywood hottie, you need to tote a colossal cup of caffeine."

Flash forward a decade, and a colossal Starbucks cup is no longer our only — or best — option. Indie coffeehouses now outnumber Starbucks and Dunkin' Donuts in New York City by two to one, according to a 2013 analysis cited by Daily Coffee News, thanks to younger coffee drinkers and an artisanal coffee movement.

A maturing scene of coffee drinkers has meant more options, and thus more opportunities to demonstrate taste, discernment and aesthetic. Carrying a Starbucks cup signals one kind of status, but carrying a petite espresso-to-go shot signals another. Ditto for a cortado or your Blue Bottle coffee.

Coffee as a social media star: As coffee has gone from the mundane to the sophisticated to the truly artistic, it seems to have become an even more powerful lifestyle symbol. The rise of fashion bloggers a few years ago found countless stylish women posing with a cup of coffee in one hand, purse in the other.

"Coffee is visually appealing and calming," Ryan Glick, who oversees the Instagram account, @coffeenclothes, told Mic. Glick began the account in March 2014 after he moved to New York from Los Angeles and found himself exploring various coffee shops in the city, he said. When he began taking taking photos of his outfits to share on social media, including whatever cup of coffee he was drinking at the time seemed natural.

So Glick began the hashtag #coffeenclothes as a way to crowdsource other images of people's coffee-paired outfits. Within a few months he'd amassed almost 20,000 followers, a base that's now grown to nearly 90,000.

Why are the coffee-and-clothes pairings so satisfying? There's plenty you can tell about a person simply from the cup of coffee they have in hand, Glick said. Are you ordering a latte? A cappuccino? Perhaps trying out a flat white?

"People have their own styles," Glick said. "It tells people about yourselves and where you get your coffee at." Sure enough, Harper's Bazaar addressed its readers in January 2015: "What Your Coffee Order Says About Your Style."

The stylish drink of choice: It's no surprise, then, that the link between personal style and coffee is being openly solidified by the fashion industry as part of a broader "lifestyle" ideal.

"As coffee is regaining status, fashion brands that are looking to gain and preserve status will want to use coffee as one of the ways they signal their own status to consumers — perhaps by offering selected, high-quality coffee to their clients," Dubois told Mic.

The coffee roaster La Colombe found success in New York by establishing itself next to clothing stores like Supreme and inside shops like Saturdays Surf. In September 2014, Ralph Lauren opened a coffee shop on the second floor of his New York City flagship store.

It makes perfect sense, as we tend to see our clothing choices, coffee selections and other lifestyle purchases as decisions in sync. As First We Feast put it, "When guys started to embrace the whole 'made in America' aesthetic of selvedge jeans, work boots, flannel shirts, and denim jackets in the mid-2000s, it was only natural that they'd gravitate towards the kinds of things that round out that lifestyle ... That included batch-made whiskey, vintage cars and motorcycles, cast-iron kitchenware and especially coffee."

Our style may start with what we wear, but it doesn't end there. It's reflected in every choice we make, from the cases that house our iPhones to the bedding decorating our beds. It's also in what we drink — and what we Instagram.