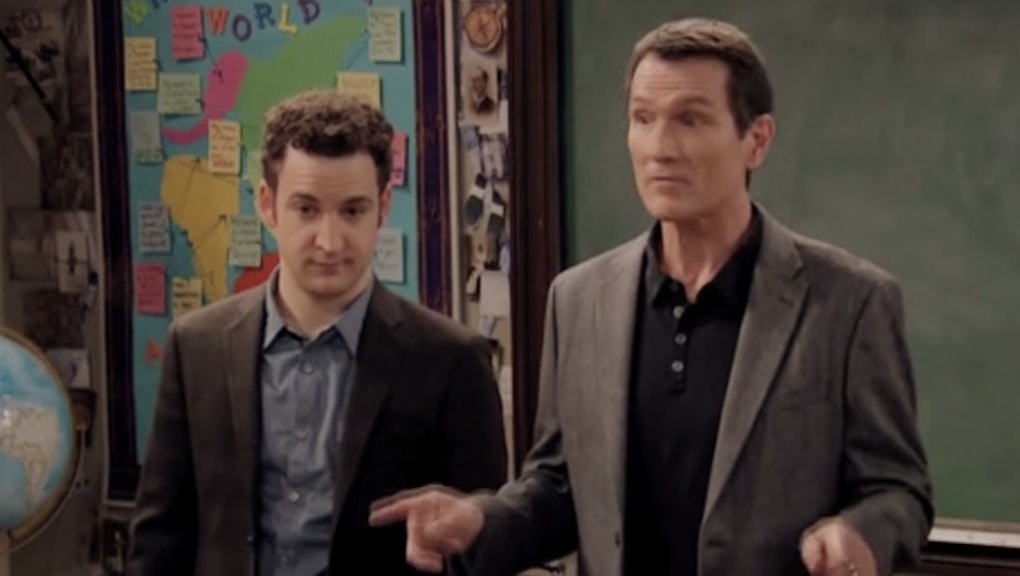 Girl Meets World, the Boy Meets World spinoff currently in its second season on the Disney Channel, has boasted an impressive roster of alumni from the beloved ABC series. In addition to regulars Ben Savage and Danielle Fishel (Cory and Topanga Matthews) playing parents to series star Rowan Blanchard's Riley, the show has brought back a dozen Boy Meets World characters, from family members to ex-flames to the beloved Mr. Feeny.

Yet on the July 17 episode, the new show used an alum guest appearance for perhaps the best purpose yet: resolving an unsolved mystery from the original series.

In "Girl Meets the New Teacher," Riley's teacher gets in trouble with the school's administration, leading Cory to get involved as well. The school superintendent has to come intervene — and it turns out to be Mr. John Turner, Cory's teacher from Boy Meets World.

Turner returned not only for the plot, but also to provide closure to Boy Meets World fans. See, in the original show, Turner was involved in a motorcycle accident. That series played around a bit with its cast and timeline — for example, Cory's brother Eric ages slower than he should, celebrating his 18th birthday years after he should have.

In Turner's case, he last appeared in a season four episode in which he experienced a near-fatal motorcycle accident. His fate after the crash was never mentioned.

Luckily for the character, he turned out to be all right. He's married, has a great job and even gave Cory his gig working at Riley's school.

Girl Meets World has been incredibly smart about its fan service so far. The show works independently as a Disney Channel series, with a tone befitting the young audience. But to avoid turning off the parent audience watching with them, the series laces in little bits of nostalgia like this. To bring back a character directly relevant to the episode's plot while resolving a hanging thread from the original series is a lesson in how to make a revival work.

Watch some of Turner's scenes on Girl Meets World below.