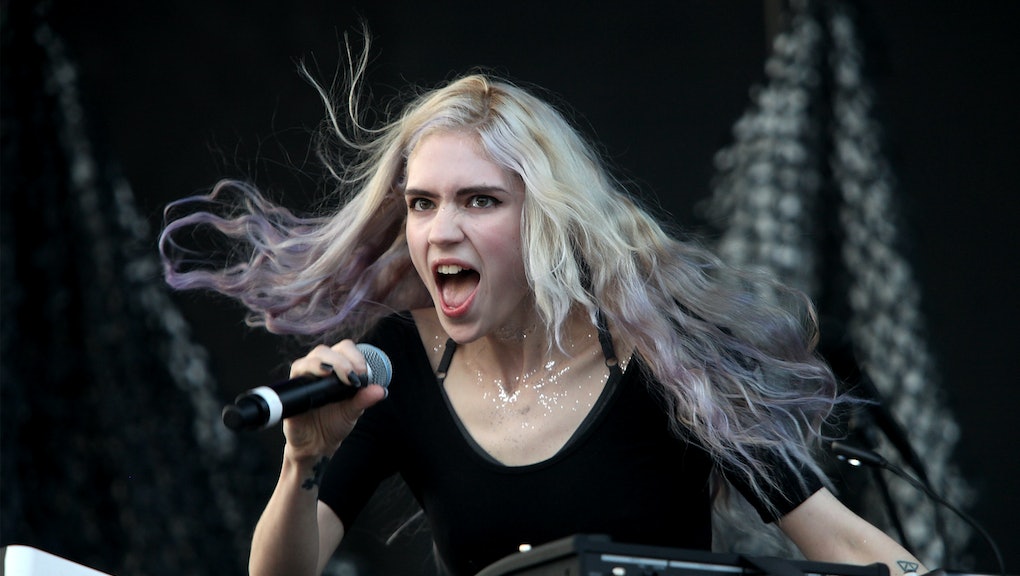 Few musicians have shed a more damning light on sexism in the music industry in recent years than Grimes.

Grimes, whose name is Claire Boucher, has written essays and Tumblr pieces helping young women navigate the industry. Her latest cover story in Fader, which discusses her upcoming album, reveals disturbing details. Even for a musician as talented as Grimes, she feels her gender still causes many to underestimate and disrespect what she is trying to build.

Facing threats: "I get threats constantly — all female musicians do," she told Fader. "People want to, like, rape and kill you. It's, like, part of the job. One time I was backstage at a show, and there was this random guy in my dressing room, and he just grabbed me and started making out with me, and I was like, 'Ah!' and pushed him off. Then he went, 'Ha! I kiss raped you' and left. Shit like that happens quasi-frequently."

Other musicians have recently spoken about similar threats. In 2013, Lauren Mayberry from the synth pop band Chvrches wrote an article in the Guardian calling our her rape trolls, and posted one of her threats on Instagram earlier this year. When Grimes performs, she told Fader, she has to surround her stage with bodyguards to make sure her no one tries to act their threats onstage.

If these men took the same time getting to know her music, they'd know Grimes' posse is not one to mess with.

The misogyny also follows her into the studio. Though Grimes writes, produces, engineers and performs her own music and edits, even color corrects her own music videos, she still has men in the industry offering to help her with the stereotypically "unfeminine" technical aspects of music creation.

"I don't wanna say I don't identify as a girl, but I don't fucking give a shit about gender," she told Fader. "And the thing that I hate about the music industry is all of a sudden it's like, 'Grimes is a female musician' and 'Grimes has a girly voice.' It's like, yeah, but I'm a producer and I spend all day looking at fucking graphs and EQs and doing really technical work."

It's follows her throughout her studio work. "Going into studios, there's all these engineers there, and they don't let you touch the equipment," she said. "I was like, 'Well, can I just edit my vocals?' And they'd be like 'No, just tell us what to do, and we'll do it.' And then a male producer would come in, and he'd be allowed to do it. It was so sexist. I was, like, aghast."

She's discussed this kind of disrespect before in a 2013 Tumblr post. "I'm tired of men who aren't professional or even accomplished musicians continually offering to 'help me out' (without being asked), as if I did this by accident and I'm gonna flounder without them," she wrote. "I have never seen this kind of thing happen to any of my male peers."

Reclaiming music-making for women: She intends her new album to prove "women can do technical work," she told Fader. "That I can be a producer and a pop star and also very experimental."

The music she describes will show her stretching into punk, nu-metal and club hip-hop. She's lined up three female MCs to spit over the latter record, rapping verses about "being too scary to be objectified." The album will likely be a "happy and angry" statement of female ferocity in the face of male-dominated industry. She has yet to set an official date for it, though early September seems likely.