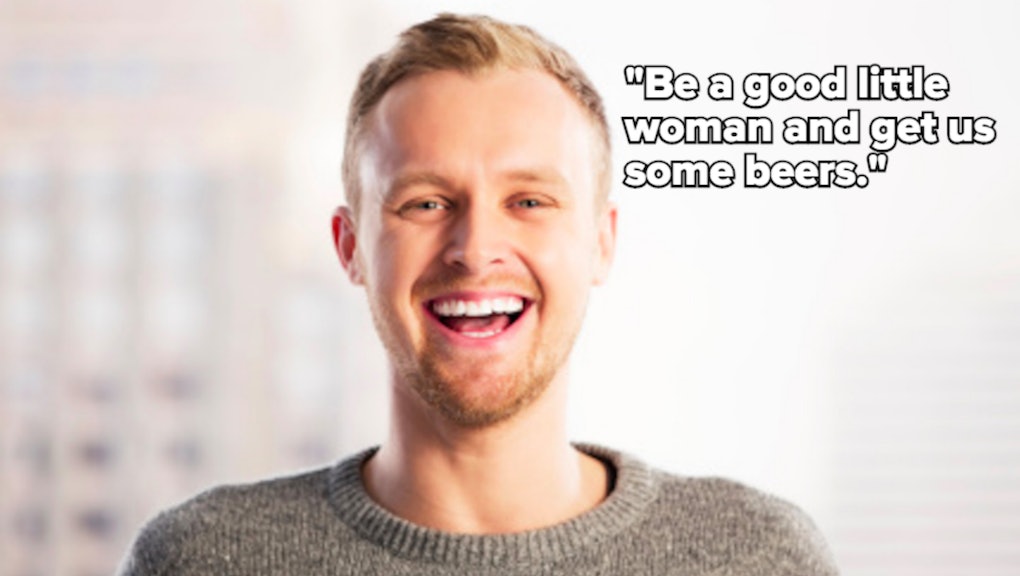 Dating is hard. It's stressful and expensive, and we often ending up wishing we'd hung out with Netflix and a carafe of Rose. But there is one thing that's worse than dating itself: dating sexist dudes.

That's because there are some men (maybe even you, according to statistics) who spew dumb stuff out of their mouths and never get laid because women are turned off by their retrograde views. Then they get mad they never get laid, so they go on more dates and keep spewing dumb stuff to women, and the misogyny cycle churns anew.

There are too many horror stories of men who feel entitled to have their privates played with because they shelled out for not one, but two items from Taco Bell's 99-cent menu.

Amy, 27, told Mic this tale of misogyny: After going on a date with a guy, he refused to split the bill, telling her he was "an old-fashioned guy." When she later suggested they part ways, he was outraged. "He didn't SAY he felt entitled to sex since he paid for our meal, but he was like 'Um, oooooookay? I thought this went really well?'"

Tammy, 25, had a similar story: "I had a date in high school where a guy took me out to laser tag and the drive through Smoothie King; the height of teenage suburban luxury. We had an awesome time until he parked on the way back and asked for a blow job. I laughed and told him no. He said, 'Well, I took you out, and paid for your smoothie.' I reiterated the no, and he drove me home, never to call again."

Then there are men who don't even attempt subtlety. Jacinda, 32, once had a gentleman caller who asked the following charming question on the first date: "'When we have sex later, do I get to come on your tits or your face?'"

2. Don't tell women they're "better" or "different" than other women to curry favor.

Staci, 32, said a dude she dated told her she had the "best music taste of any girl I know." Another woman, Corinne, 24, said one man-child told her, "he wasn't normally attracted to black girls" but he found it in the kindness of his heart to tell her she was nonetheless "pretty hot."

Gentlemen, let's be clear: Putting down women will never get you points with a woman who loves herself and who doesn't hate other women. When you tell a woman she's somehow "different" or "better" than other women, you don't come off as sensitive and accepting. You just come off like a misogynist who's never met another woman in his entire life.

3. Don't assume women are interested in having your babies (or anyone else's, for that matter).

May, 31, said she once told a date that she didn't want kids. He got upset, asking, "Then why do you bother even dating? How can you reject what is biologically the reason you exist?"

This one is pretty easy, men: Don't treat women like they're only on this planet to give birth. It's a sexist stance that values women for their reproductive skills above all else. And even if a woman actually felt this way, you'd probably freak out if she demanded that you immediately inseminate her, because that shit is creepy as hell.

4. Don't treat a woman like she exists to service you.

Andi, 28, told Mic: "The guy I was seeing in college had lots of money and once offered to pay me to skip work and go camping with him instead. When I got upset, he upped it to offering to pay my bills if I just quit my job and hung out with him all the time." They soon broke up, for the following obvious reason: Women don't exist to service men (unless, of course, you've both explicitly discussed that you're into that).

As a side note, women also aren't into you asking them to use their seductive lady powers to score you gifts and favors. Marnie, 28, said: "Me and my date are at the bar. He hands me a $20 bill and says, 'Be a good little woman and go get us some beers.' I ask, "You are sitting right next to the bar, can you get us some beers?' He says, 'No, you can flash some titty, that will get us served way faster.'" She then farted in his face and ran screaming into the bitter night. (While we can't confirm that's exactly what happened, it's certainly what he deserved.)

5. Don't comment on how much she is or isn't eating or drinking.

Policing what a woman puts in her mouth is not your concern, and you'd be wise not to comment upon it (especially if the thing you want to talk about putting in her mouth is your dick).

Cindy, 27, recalled going on a date with a man who was very concerned about her consumption habits. "I ordered food and the guy said, dead serious, 'Are you really going to order all that?'" she told Mic. "I think it was just an entree and I added a soup or something. Then, normal conversation. As food slowly arrived he would just stare and say, 'I cannot believe you are going to eat all that!'"

Believe it, buddy. If we weren't on a date, we may be eating even more. But that's none of your goddamn business.

Judging by the sheer volume of responses Mic received in this category, this is among the most common offenses.

"I had a guy interrupt me mid-sentence during a somewhat intellectual conversation to tell me he couldn't stop looking at my legs," one woman told Mic. "This was not cute!" Other responses in this category included a guy who was upset that a woman was taller than he was, a guy who was angry that a lady appeared to be 20 pounds heavier than her profile photo (he told her this was a good thing, but still: not cute), and a "hipster douchebag who actually said this to me: 'Your face? Have you seen your own face? It's beautiful. You ruin it every time you open your mouth.'"

Here's a pro tip for any men: When you insist on opening car doors and not stepping out of an elevator before we do, it might make make you feel good, but it's just not that impressive to us. While no one's actually going to yell at you for doing it, it's a little weird and reeks of forced chivalry. You might think you come off as a "good guy" who "treats women with respect," but in reality, you just come off as odd and antiquated, like Victrola players or dying of syphilis.

As Lisa, 37, told Mic: "For a brief while, I dated a guy that subtly coughed as we neared any door to remind me I was supposed to stop and wait for him to open it for me. I took that as my cue to always open the door for him."

There is, however, one caveat to this rule: As with many of the other items on the list, if a woman has explicitly told you beforehand that she's, say, really into guys who hold the car door open for her, then by all means, go for it. Do whatever you want! Hold car doors open, then put on a gimp mask and eat at Olive Garden! It's probably not the worst thing Olive Garden has seen.

8. Don't assume that, because a woman looks like your ex or another woman you're attracted to, they're interchangeable.

Having a "type" is one thing, but spending your entire life looking for someone who looks exactly like the one that got away is quite another.

Rebecca, 29, recently experienced this firsthand when she went on a date with a guy at a bar. "The first thing he says when he sees me is, 'You're not a redhead! You're a redhead in your picture!'" she told Mic. While she patiently explained that her photo did not, in fact, depict her as a redhead (although to be honest she probably didn't need to, because hair dye is totally a thing), she agreed to let him buy her a drink. It didn't end well.

"Turns out that he wanted a redhead because he was already in a long-term relationship with a redheaded woman, but she was a bit older (late 30s), already had a child, and didn't want any more kids," Rebecca said. "So he was basically looking for a baby mama who looked like her." When Rebecca politely suggested that he go on Craigslist to find such a woman, he said the only replies he'd gotten on that site were from "freaks."

Yes. They're the freaks. Not the guy who's on Craigslist looking to inseminate a 30-something woman with the MCR1 gene.

9. Don't insult a woman just because she's not that into you.

If at any point on your date the woman you're out with decides you're not the one, that's not an excuse for you to be a dick to her. Kelly, 27, told Mic the following charming story: "I told a guy that I went on a couple dates with that I didn't see a future with him but I'd love to be friends, and he said: 'That's cool; you're fat anyway.' Uh, OK?"

Amber, 36, had a similar experience with a dude she had never even interacted with. "I once had a guy on Match.com digitally cuss me out for not responding to his 'Hey, there' message after one day," she told Mic. "He said 'Write back when somebody like me says hello. You're not even that hot! You should be begging me to go out with you, stupid ho.'"

Guess what, guys? Women are allowed to 1) not want to date you, and 2) change their minds about not wanting to date you. None of that warrants a baby-man freakout.

This might seem pretty obvious, but apparently it's not: Don't have different criteria for behavior for women than you do for men.

11. Don't assume a woman is doing something just because she wants to service your boner.

Women do all sorts of things without ever thinking about how it will or won't affect a man. We wear makeup because we like bright colors, and we wear short dresses because they make us feel cute or empowered or to prevent heat exhaustion because it's like a million degrees. Repeat after me: Women don't do these things for you. None of this is for you.

As Olivia, 32, told Mic: "A bro I went on a few dates with back in the day told me that it was so hot how I didn't need to wear makeup. I was wearing foundation, bronzer, mascara, and lip gloss at the time." Just goes to show, guys: It's always best not to comment on things you know nothing about, especially when you're talking to women you'd like to have sex with. Sexism is a major lady boner-killer, but stupidity is even worse.