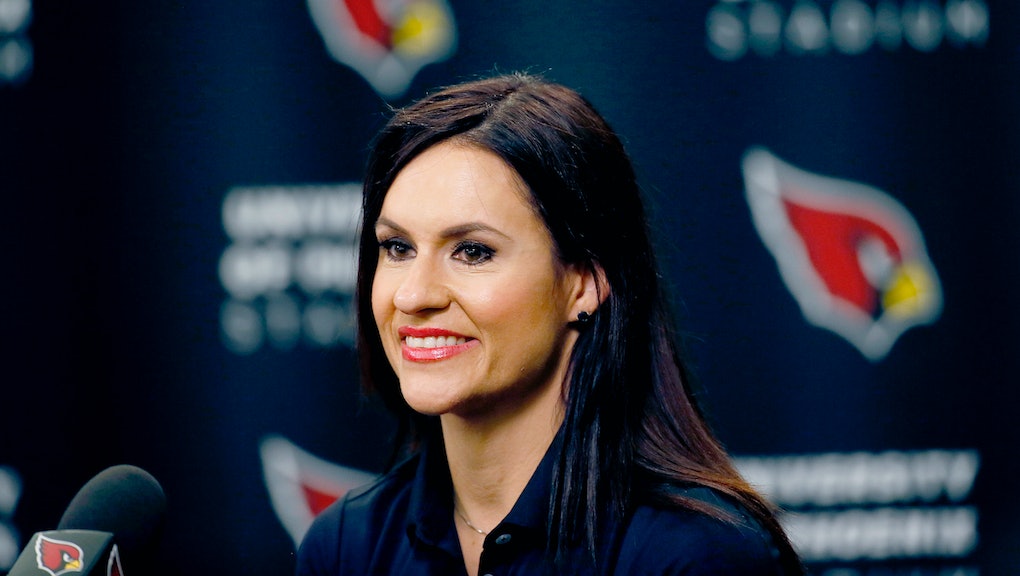 Jen Welter made history Monday when she became the NFL's first female coach. Given the barriers women face in the sports world — like wage gaps, sexualization and discrimination — the Arizona Cardinals' accomplished new coach is inspirational. But when asked what young women can learn from her experience, Welter looked beyond athletics and touched on a surprising, yet crucial, obstacle all young women face.

"I think the hardest thing in our society right now — no offense — is the media," Welter said at a press conference Tuesday, according to the Huffington Post. "We [tell] little girls all the time to be beautiful and to do it all the wrong ways. We show them as accessories, for no other better way to put it. ... Adolescent female self-esteem right now in our country is at an all-time low. ... We've shown them that image is more important than intelligence, that beauty is more important than talent."

"Until we pick up and show [young girls] women that are doing things because they're awesome and not just because they're pretty — how else will they judge themselves?" Welter asked. "And pretty is a standard very few people can live up to because it's perfection, it's Photoshop, it's Instagram, it's filters. I know I love the saying 'I woke up like this,' but I promise you, I don't wake up like that. Very few of us do."

Ultimately, Welter said she wants young women "to grow up knowing that when they put their minds to something, when they work hard, that they can do anything."

And with more role models like Welter in the public eye, it seems increasingly likely young girls will start to internalize just that.