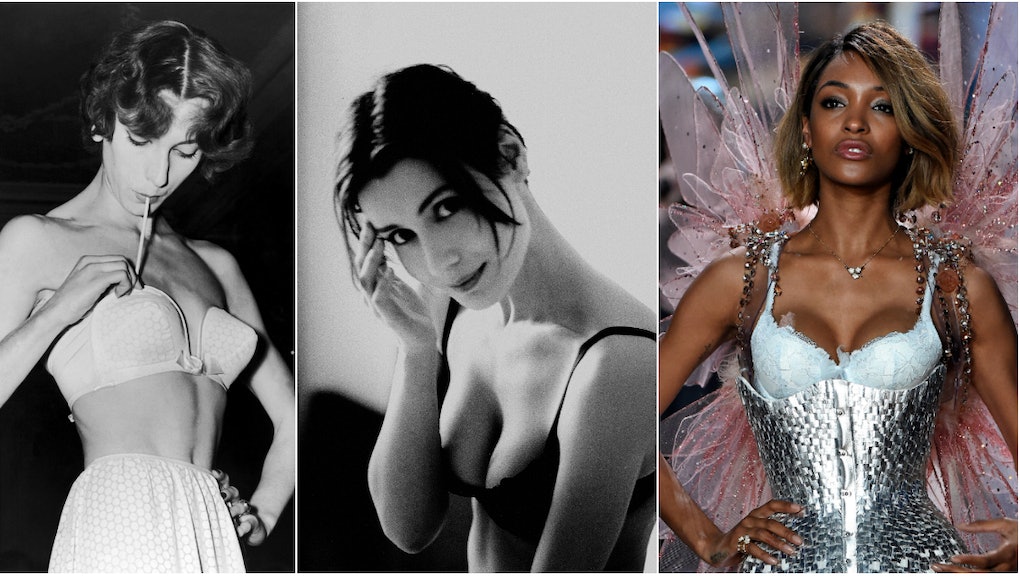 At the end of a long, sweaty day, filled with commitments both personal and professional, many women share a similar fantasy...

Most women want nothing more at the end of the day than to throw off their bras, and for good reason: Bras can be a burden and a literal pain, inspiring many women to celebrate going without them. We've seen the birth of #nobra and #brafree, as well as several different National No Bra Days. Our bra-hate has never seemed clearer.

Yet despite the rise of liberating, breast-positive social media movements, casting off our booby traps isn't so easy for the majority of women. There are deep, long-running beauty standards that dictate our bra habits — specifically, which boobs get to roam free and which don't.

In every generation, beauty standards come with boob standards. Bras aren't just traps, of course — they have real function. For women with heavy, pendulous sacks of fatty tissue that get in the way when they're not pinned down, bras are a physical godsend. Jenn, a 30-year-old DD-cup, colorfully described her breasts' unbound motion to Mic as causing "jiggles, jaggles and sharp bites to the nip."

But our impulse to wear bras is also deeply rooted in expectations of women's bodies. Female beauty standards include boob beauty standards, and bras have long been helping women meet those standards.

Back in the 16th century, wealthy women took to wearing corsets to create slender silhouettes that emphasized the bust. Flattening bandeaus were popular in the 1920s, while the early '40s saw the emergence of the so-called "bullet bra," engineered to encourage a cartoonishly perky shape. As we became ever more comfortable drawing breasts closer to eye level, noble researchers pioneered today's push-up.

The standard today, and for as long as we can remember, is upright, full, perky and round. But the truth is few women's boobs are actually capable of maintaining these ideal shapes unassisted. The standard of boob beauty particularly disadvantages women with physiques more prone to gravity, including those who are heavier or older. And the average American woman's breast size is only growing, currently upwards of a 34DD.

Going #brafree with imperfect boobs isn't always "liberating." When we praise (er, gawk at) "stars who go braless," the array of women generally fits the perky, young, round expectation. Bigger, gravity-influenced boobs flying free aren't quite so celebrated — something that's evident when real women try it. Many ladies (although not all) find it hard to articulate exactly why ditching their bras is so unpleasant, but constantly feel as if they're under critical eyes.

While embarking upon her own weeklong experiment with bralessness, Bustle writer Gabrielle Moss remarked that "wearing a bra was apparently more important than having successfully earned a bachelor's degree when it came to landing an office job." Kristin Chirico of BuzzFeed, who conducted a similar experiment, determined that "being without a bra feels like getting into a car without a seat belt: careless, dangerous and something I could get in trouble for if I got caught."

"We couldn't do it because it would be awfully unpleasing to look at."

Not all women mind that their free-flying boobs fly in the face of convention. But for those who do, the insecurity is exacerbated when you've got boobs that don't fit the ideal.

"I remember talking about bras with this other girl who was in my high school: We have the personality to not wear a bra, but there's no way we couldn't," said Rebecca, a 20-year-old who underwent breast reduction surgery this year, to Mic.

"It's kind of a lifestyle choice," she added. "We couldn't do it because it would be awfully unpleasing to look at."

Awfully unpleasing for whom? Everyone else, of course. On the other hand, Alicia, a 29-year-old with self-described "smaller-than-A-cup, nonexistent boobs," told Mic, "I leave the house without [a bra] as much as possible, basically unless my nipples will be visible."

The freedom shouldn't reserved for one narrow body type. Ironically, the boob beauty standard may be on display with #FreetheNipple. The campaign to liberate women's bodies from arbitrary policing and shame seems to be "only representing nipples that adhere to patriarchal standards of beauty," Georgina Jones wrote for Bustle.

That doesn't mean that all nipples shouldn't be free. But it's a reminder that, much as we hate our bras, it's not so simple to just toss them all aside when there's a certain kind of breast the public expects to see — and certain breasts that are rarely welcomed to the light of day.

As Jones put it on Bustle, "When you write a blog post about 'How could anyone still be wearing a bra these days,' take a second to consider the people who feel like they have to wear a bra these days."

If they didn't feel that way? Well, going bra-free can be pretty great.

Eventually, Rebecca found the braless experience to be attainable, after her surgery took her down to a C-cup. "I didn't wear a bra yesterday, and it's kind of nice to finally be able to have this... mobility, almost," she said. "It's a fun experience. I've never had it, so I'm really relishing it."