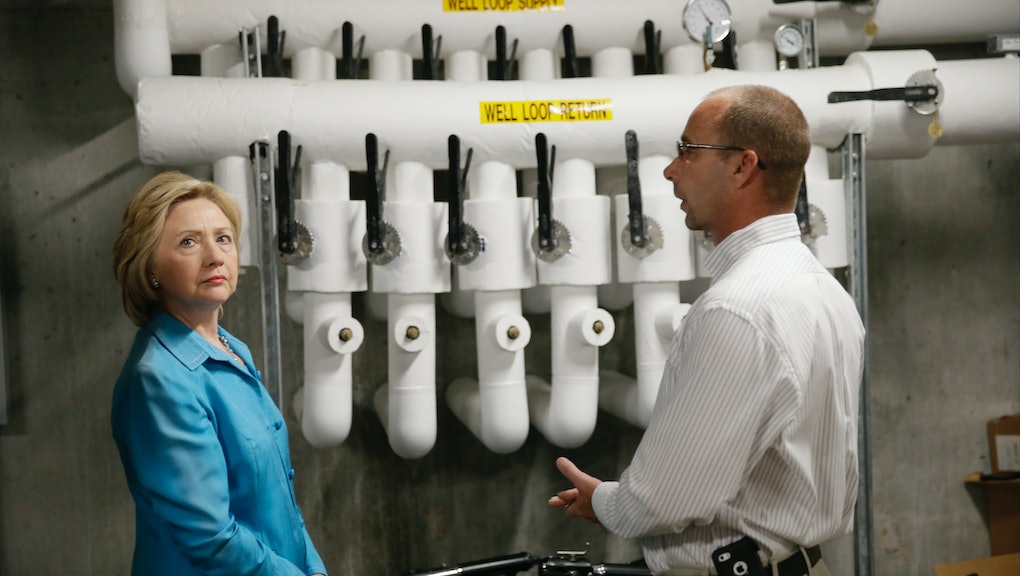 On Thursday, Jennifer Palmieri, the communications director for Hillary Clinton's presidential campaign, published a nearly 2,000-word letter addressed to the executive editor of the New York Times, accusing the paper on Thursday of "inexplicable" and "indefensible" errors in its decision to run a story suggesting Clinton was being targeted for an investigation into potential criminal activity during her time as secretary of state.

The campaign said it posted the bruising message, dated July 28, on its own site after the New York Times chose not to place it online or in the pages of the next day's print edition.

First appearing online the evening of July 23, the article in question claimed two inspectors general had asked the Justice Department to launch an investigation "into whether Hillary Rodham Clinton mishandled sensitive government information on a private email account" she used while running the State Department.

Hours later, the New York Times quietly updated the story with a softer headline and less aggressive tone, saying the probe would only focus on "whether sensitive government information was mishandled in connection" with the account. By midday on July 24, the Justice Department publicly denied having come into receipt of any criminal referral.

"This was, to put it mildly, an egregious breach of the process that should occur when a major newspaper like the Times is pursuing a story of this magnitude," Palmieri writes in her letter to New York Times executive editor Dean Baquet, suggesting that "in its rush to publish what it clearly viewed as a major scoop, the Times relied on questionable sourcing and went ahead without bothering to seek corroborating evidence that could have supported its allegation."

Clinton chose to use a personal email server, domain and address instead of a more secure, government-issued account during her four years as secretary of state. Though she has repeatedly insisted the decision was made for the sake of convenience, it had the effect of shielding potentially sensitive communications from federal oversight, in addition to media inquiries in the form of Freedom of Information Act requests.

Working the refs: If the Clinton campaign actually expected the New York Times to print their "letter to the editor" in full, they would have been asking for a lot of real estate on the most valuable opinion page in the world. In Friday's paper, for instance, the New York Times published nine letters to the editor on four different topics, totaling 1,308 words. Palmieri's missive alone clocked in at 1,938 words.

While there are, of course, no space limits on the Internet, it's difficult to believe the campaign had any expectation the paper would host a long invective against a story it has not fully retracted. The more likely purpose for writing and publishing the letter is to encourage New York Times editors to tread more carefully on future stories about Clinton's controversial email account.

"The speed with which the Times conceded that it could not defend its lead citing Mrs. Clinton as the referral's target raises questions about what inspired its confidence in the first place to frame the story that way," Palmieri writes, openly questioning the reporters' motives.

"More importantly, the Times' change was not denoted in the form of a correction," she adds. "Rather, it was performed quietly, overnight, without any accompanying note to readers. This was troubling in its lack of transparency and risks causing the Times to appear like it is trying to whitewash its misreporting. A correction should have been posted promptly that night."

The criticism here is mostly fair. It is standard practice at most major news outlets to note updates to stories or, in the case of outright errors, post robust correction notices. As many readers noticed immediately and as Politico detailed that night, the New York Times tweaked their account without notice, comment or explanation.

For its part, the New York Times has been mostly contrite. "We got it wrong because our very good sources had it wrong," editor Matt Purdy told the paper's public editor, Margaret Sullivan. "That's an explanation, not an excuse. We have an obligation to get facts right, and we work very hard to do that."