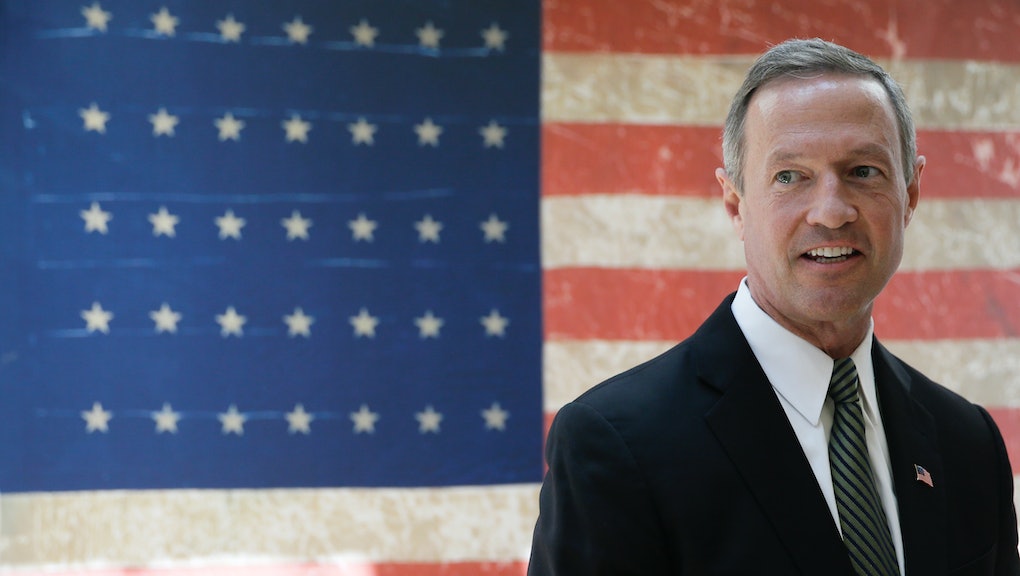 From less aggressive policing to smoother prisoner re-entry into society, the ideas presented in his policy paper constitute a pitch for a wholly more progressive paradigm for crime and punishment in the United States.

Invoking the campaign talking point "there is no such thing as a spare American," the former Maryland governor's proposal describes how "for too long our justice system has reinforced our country's cruel history of racism and economic inequality." O'Malley argues that making amends for this history requires an extensive reappraisal of norms in criminal law and policy.

O'Malley's proposals are all the more striking given his personal criminal justice record. After the death of Freddie Gray, the young black man who was killed in police custody in West Baltimore in April, O'Malley, also the former mayor of Baltimore, was heckled for his past history of supporting harsh policing methods in the city he once governed. During his kickoff speech in Baltimore, activists tied the epidemic of police brutality across the country to the policies O'Malley oversaw during his time in office.

But the policy proposals O'Malley laid out Friday make it clear he's headed in a different direction.

The plan: The plan begins with a discussion of how "public officials especially, including police officers, must treat all communities fairly and earn their trust." In order to do that, O'Malley calls for mandating and expanding data reporting, using transparency-focused technology like body cameras, and federal standards for excessive force.

O'Malley's paper is forceful on fairness in sentencing, laying out a few major commitments: eliminating the disparity between crack cocaine and powder cocaine (a disparity that was dramatically reduced by Congress in 2010, but one that still exists), eliminating mandatory minimum sentences for low-level drug sentences, ending the death penalty and reclassifying marijuana from its strict Schedule I drug status under federal guidelines.

One major focus of the white paper is repurposing American correctional facilities to emphasize the rehabilitation of prisoners. In order to stem the extraordinary recidivism rate in the United States — over two-thirds of released inmates return to prison within three years — O'Malley proposes increased funding for programs that prepare prisoners for reentry. He points to job-training programs and grants for pursuing higher education. When people make it out of prison, O'Malley argues their voting rights should be restored and they should be legally protected from practices that stigmatize them in the job market.

While criminal justice reform has been a hot topic in the presidential race, some of the policies O'Malley emphasizes haven't yet received a great deal of attention. In particular, his call for phasing out for-profit prisons is noteworthy. The private prison industry is booming financially, the source of a great deal of lobbying for the practices that produce mass incarceration, and responsible for a huge percentage of the immigrant prison population. While for-profit prisons are particularly notorious in the minds of progressive criminal justice advocates, the issue hasn't received sustained criticism in the mainstream policy conversation for the past few months.

The pitch: O'Malley's paper, which also includes several recommendations for better policies for treatment of juveniles, the mentally ill and immigrants, ends with an appeal to the systemic problems producing mistreatment in the courtroom and in the prison cell.

"As a nation, we must strive to remove barriers to full participation in the social, economic, and political life of our nation, once and for all," the paper says. "Legal equality is absolutely necessary but not sufficient – we must strive for equal opportunity and a fair shot for everyone. That means helping to ensure good jobs that provide stable incomes; universal, high-quality childcare; affordable housing and homeownership; and greater equity in our education and health care systems — for all Americans."

O'Malley's plan is bold and thorough, but it doesn't separate him much from the pack in the contest for the Democratic nomination. Hillary Clinton has made criminal justice reform one of the major concerns of her campaign, and her recent invocation of #BlackLivesMatter was perceived as a moment in which she outpaced everyone in the race on her commitment to addressing the movement's grievances. Of course, like O'Malley, Clinton too has a history of being on the wrong side of the mass incarceration, and her recent turnaround strikes many critics as opportunism.

But ultimately any candidate will be forced to deliver on any promises should they make it to the White House. The key is to convince the public they're the right person for the job.