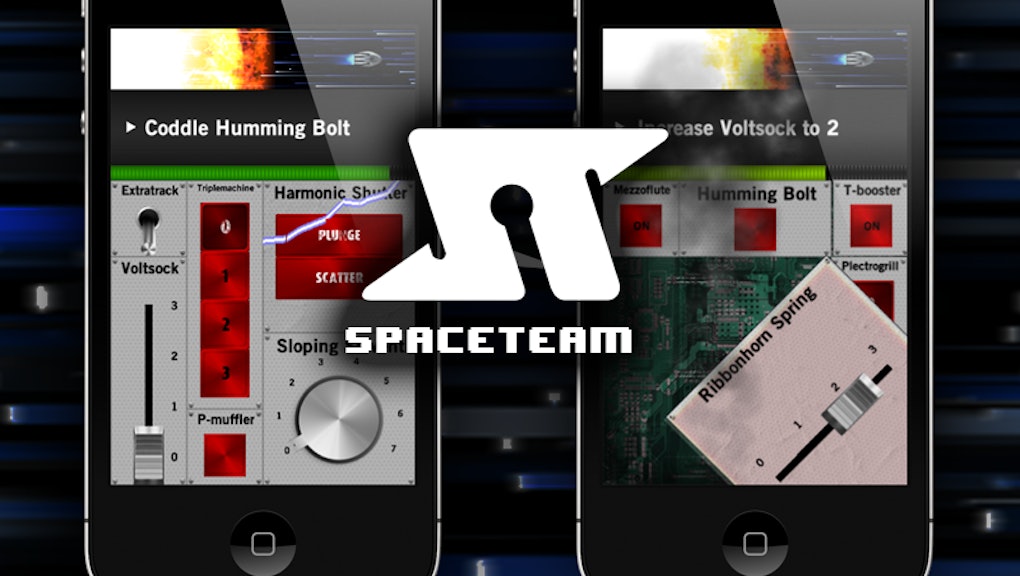 This Is the Best Multiplayer Game for Your Phone. Why Aren't You Playing It Yet?

Some games are built to test your will, to build character, to change you. These games ask you to look at your fellow players with unclouded eyes, to see them for who they really are. Spaceteam is such a game — although calling it a game feels like a disservice. When you actually unlock your phone and begin playing, Spaceteam feels more like a discipline, like yoga, or a bonding experience, like a digital trust fall.

What is this blessed game? Spaceteam is a multiplayer game for groups of two to four players. It works on iOS and Android devices. It is impossible to play alone. As a party game, it's flawless.

The game casts you and your teammate as the crew of a rickety spaceship escaping from the oncoming flames of an exploding star. The game gives you commands that you have to punch into your control panel — a randomly generated set of knobs and dials labeled with technobabble terms like "Ribbonhorn Spring" or "Plecto Grill." You progress through the game with mounting challenges until you're torn asunder by the inescapable nova.

It costs absolutely no money, though you can pay for little masochistic upgrades to make the game even harder.

It's like Bop It, if Bop It were programmed in hell.

Now here's the essential twist: Those commands you're getting from the game? Those are the instructions for the other players' control panels. At the same time, you yell similarly wacky space terms at your teammate. Every move you make is an instruction you'll have to receive verbally from other players. It turns the game into a babbling and confused shouting match: "Disentangle Rotothumb!" "Set Dioptric Forepickup to 6!" "Match Socks!" Not only do you have to relay these to your teammates, but you must pronounce them correctly, which is often a greater challenge.

And every once in a while, it will inform you that an asteroid or wormhole is coming, requiring the entire team to either flip their phones upside down or shake them vigorously. It's like Bop It, if Bop It were programmed in hell.

Spaceteam is the team-building exercise you've always needed. When you play it the first time, the game will sound like an escalating cacophony of confused directions. Then you slowly figure it out. It culminates in a simultaneous sigh of exasperation and joy. At its loudest, it sounds like group sex in space.

A synchronized Spaceteam is hypnotizing to witness. By playing Spaceteam, you seek a more perfect union with your fellow players, learning to respond to their unique style of shouting and receiving instructions. Like a rowing crew or a Japanese precision-walking team, your teammates will form a gloriously unified front.

As you become more seasoned, you and the people you play with will fuse into a seamless unit of command-line comrades. Spaceteam is ideal for any bonding situation or get-to-know-you game. Having trouble relating to a new roommate? Does your spouse seem unnaturally distant? Spaceteam will reconcile you with your father. Spaceteam will save your marriage.

The game is a dark horse: It has been available for three years, unbeknown to us all. The idea for Spaceteam came to creator Henry Smith in a dream. He told Animal he left his job as a programmer with BioWare to develop Spaceteam as a solo project, inspired by rudimentary science fiction and a board game called Space Alert.

"I also really like the idea of people shouting ridiculous things to each other while playing," Smith told Polygon. "Technobabble has this kind of place in our culture where everyone sort of knows what it is. So a spaceship and shouting crazy science fiction terms at each other, everyone understands that. It seemed like a natural fit."

Since then, Spaceteam has gone on to win a slew of awards. It's grown a cult following and was featured in an exhibit at the Museum of the Moving Image in New York City. This game is art, if not a historical artifact.

We're in a golden age for independent games. The lowered cost of production, combined with the near-ubiquitous presence of powerful smartphones, has created perfect conditions for small houses to create artist-driven games and experiments — and actually find an audience.

But the most exciting leap in video games? Their recent emergence off the screen and into real space. Soon to be released are displays that allow you to see 3-D objects right in front of you. There are augmented-reality games that turn your entire city into a game board. And there are games that actually get people standing together, holding their phones and dancing around the room in unison.

This is a better promise for the future of gaming than increased graphics, elegant gameplay or refreshing old classics. Spaceteam is at the intersection of simplicity, cooperation and fun. In other words: