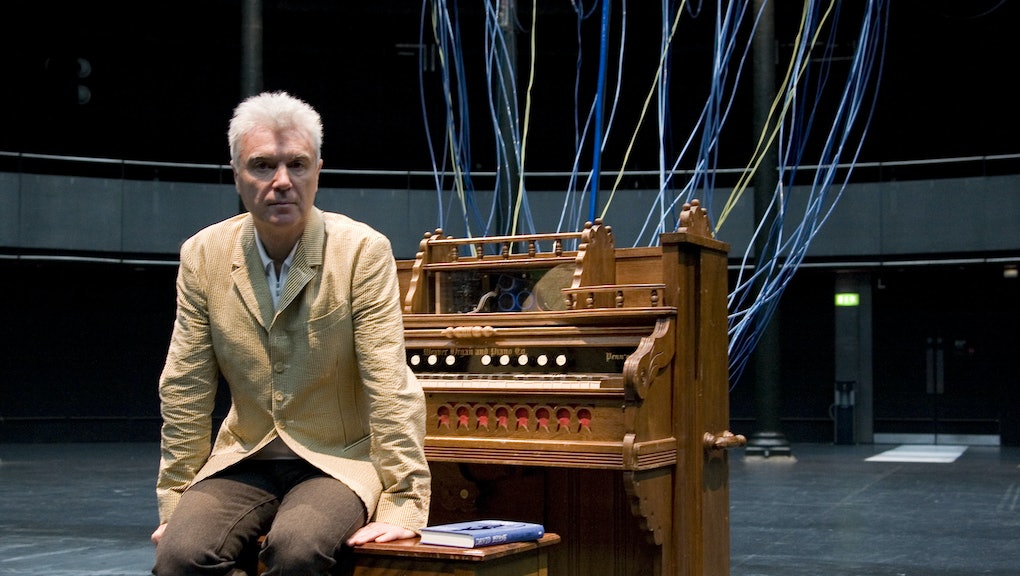 On Sunday, Byrne, the mastermind behind the Talking Heads and author of the acclaimed How Music Works, penned an op-ed in the New York Times in which he offered a state of the union on streaming music. In his thorough examination of the industry, Byrne didn't default to the common accusation that Spotify and Apple are ruining music. He took a more nuanced view, pointing out a more likely enemy keeping artists from making money off their music: the major record labels themselves.

What's really going on: "It's easy to blame new technologies like streaming services for the drastic reduction in musicians' income. But on closer inspection, we see that it is a bit more complicated," Byrne explains. "Even as the musical audience has grown, ways have been found to siphon off a greater percentage than ever of the money that customers and music fans pay for recorded music. Many streaming services are at the mercy of the record labels (especially the big three: Sony, Universal and Warner), and nondisclosure agreements keep all parties from being more transparent."

Byrne describes the difficulties of finding out how ad revenue from YouTube videos is shared, or how labels distribute the money they receive from their songs being played on streaming services. He cites an infamous leaked contract between Sony and Spotify that shows Spotify paying Sony more than $40 million in advances, without explanation of what Sony would do with the money. Byrne discusses getting stonewalled at every turn trying to answer the most basic questions — an experience shared by everyone who's ever tried to get answers out of a major label.

The breakdown: Spotify, which Byrne acknowledges for transparency on its end of the exchange, pays about 70% of its revenue to labels in royalties. According to Byrne and his nameless sources, artists only receive about 15% of this cut. This estimate might even be higher than average. In an article in FT Magazine, Swedish entertainment lawyer Per Herrey claims most musicians see closer to 6% to 10% of that income. Another exploration by Ernst & Young found that 95% of the money labels receives from streaming platforms goes to cover the "expenses" of distribution. Superstar Lady Gaga gets absolutely nothing from streaming licensing deals involving her catalog, according to a leaked copy of her contract with Interscope.

She's likely not the only one.

Byrne argues this uneven allocation of streaming revue doesn't make sense. "This might make sense if streaming music included manufacturing, breakage and other physical costs for the label to recoup, but it does not," he writes. "When compared with vinyl and CD production, streaming gives the labels incredibly high margins, but the labels act as though nothing has changed."

Byrne mentions other questionable findings about streaming payments, including YouTube, which is the most used streaming platform in the world, taking 50% of the cut from royalties. YouTube hardly ever gets mentioned in the streaming debates framed as Apple versus Spotify.

According to an infographic from Information Is Beautiful featured in the Guardian, streaming payouts from YouTube amount to around $0.0003 a stream. By this metric, it would take an artist 4.2 million streams each month to earn $1,260, the equivalent of the average U.S. minimum wage. This takes into account what labels usually skim off the top. If an artist is unsigned, they would only need around 700,000. It's a huge gulf — one that the "distribution" costs that the suits at the labels expend don't seem to justify at all.

It's not hopeless. Byrne's piece points to a few points of hope, which his previous criticisms haven't touched on. In a 2013 article for the Guardian, Byrne came down much harder on the streaming services, condemning them for low payouts, only tangentially mentioning that labels were withholding inappropriate amounts of revenue. Now, he says that transparency is the key.

"With shared data on how, where, why and when our audience listens, we can all expand our reach," Byrne writes. "This would benefit YouTube, the labels and us as well. With cooperation and transparency, the industry can grow to three times its current size." The more people realize how bad the situation has gotten, the more interest there will be in demanding visibility and accountability. With more accountability, labels might start to treat artists like partners rather than simply as cash crops.