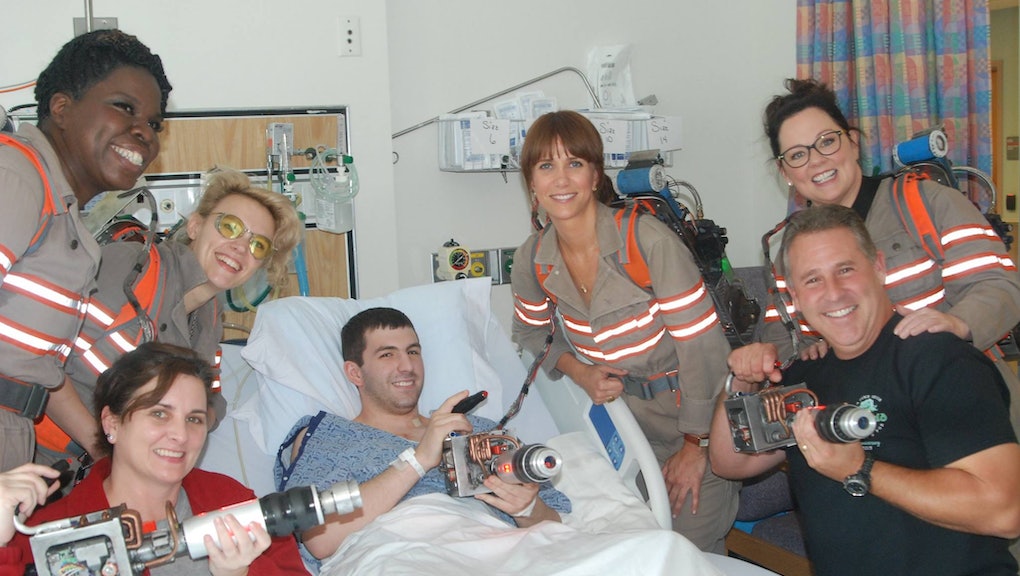 The New Ghostbusters Visited Sick Kids in the Hospital, and Facebook Users Are Furious

Visiting ill children at Tufts Medical Center should have been an amazing experience for the new Ghostbusters. Melissa McCarthy, Kristen Wiig, Kate McKinnon and Leslie Jones have been busy shooting a reboot of the beloved 1984 film, but they took time out to visit the kids — in costume, no less.

Then photos of the visit hit the hospital's Facebook page, and what was a positive, fun experience became a chance for gross, sexist comments.

The common refrain from the commenters: These women aren't the real Ghostbusters. This is just a publicity stunt. How dare these women announce themselves as the Ghostbusters when they aren't, getting the kids' hopes up?

But soon after, the page was flooded with positive comments, many calling out exactly how silly and gross the first wave of commenters were.

A lot of the comments have been deleted — though BuzzFeed collected some of the worst before they disappeared. Tuftt sent out a warning to users Sunday to keep their posts clean.

It's truly disheartening to see such dismissiveness of the new Ghostbusters, but it isn't surprising. Though there's been a ton of enthusiasm about the all-female Ghostbusters cast, there's also been a tremendous backlash. Fans afraid of change — especially when that change comes in a female package — continue to rebel against the idea. Taking complaints to photos of the actresses visiting sick kids should be a bridge too far, and yet here we are.

Not helping matters: the unannounced-but-probably-happening second Ghostbusters film featuring a male cast. By even discussing it, producer Ivan Reitman has undercut the all-female remake before it gets a chance to shine. (Perhaps that's why Reitman has backed away from talking about the other movie recently.) Even the idea of greenlighting a male-driven movie feels like a silly choice in a year that's consistently proving women are a huge box office draw. It's using tradition as a safety net in case audiences reject the change they've consistently shown they're willing to embrace.

The facts are these: Wiig, McCarthy, McKinnon and Jones are playing the new Ghostbusters. They are no less "real" than the cast of the 1984 movie was. To take time out of their schedules to visit sick kids is a wonderful gesture. Making this into an excuse to whine about the new movie is a new level of low.