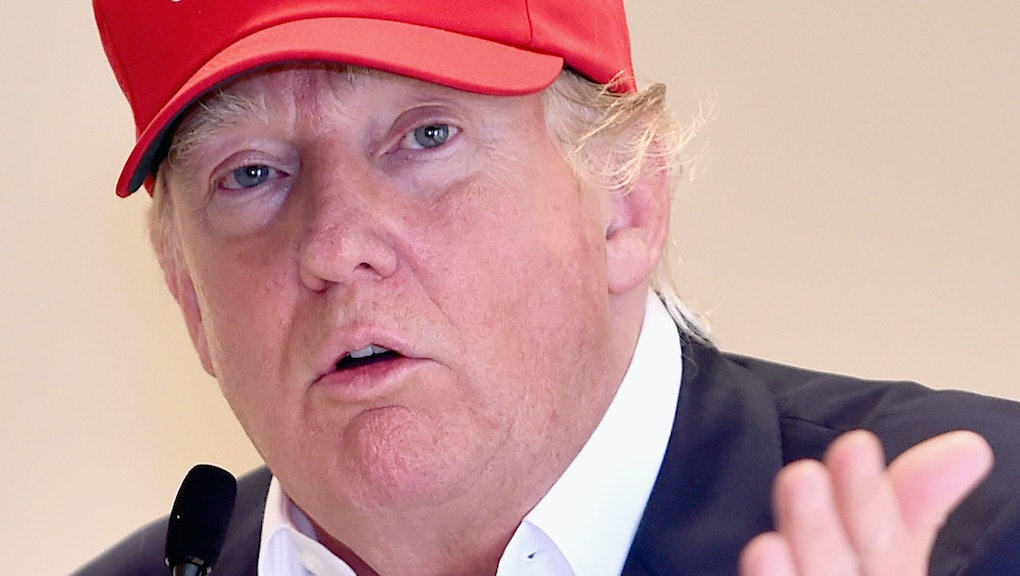 For decades, U.S. politicians have garnered votes by appealing to Americans' fear of increased crime — whether crime rates are actually rising or not.

Republican presidential frontrunner Donald Trump threw his "Make America Great Again" hat into that ring this weekend, ignoring the fact that crime has been plummeting across the country for years, and calling for increased police power at a time when many Americans, due to an increased focus on killings at the hand of law enforcement, are begging for everything but.

Here's what Trump told Chuck Todd during an interview with NBC's Meet the Press on Sunday, in response to being asked whether the recent police killings of unarmed black people constitute a "crisis":

And the full quote:

It's a massive crisis. It's a double crisis. What's happening and people — you know, I look at things. And I see it on television. And some horrible mistakes are made. At the same time, we have to give power back to the police because crime is rampant. And I'm a big person that believes in very big — you know, we need police.

Here's another crisis: American police officers have killed 680 people in 2015, according to the Guardian's "The Counted" database. In July alone, the year's deadliest month for police killings thus far, officers killed 121.

Broken down demographically, the most likely racial group to die in this way has been black Americans, at a rate of 4.21 per 1 million people, the Guardian reports. More than 1 in 6 police killing victims overall has been unarmed.

Meanwhile, though murder rates in some of the United States's largest cities have indeed spiked in recent months compared to previous years — a pattern that's typically more pronounced during the summer, according to numerous reports — crime rates nationwide have been dropping precipitously since the early 1990s.

According to a Reuters report from last year citing FBI data published in late 2014, violent crime in the U.S. has fallen every year since 1994, with violent crime rates per 100,000 in 2013 standing at about half what they were in 1994.

Trump's tactic is nothing new: The political expediency of stoking Americans' fear of crime, especially crime involving black people, has lost none of its luster over the years.

When the U.S. saw a wave of uprisings in response to anti-black state violence during the 1960s, then-Republican presidential candidate Richard M. Nixon drew voters — especially Southerners sympathetic to racial segregation — by promising to  get "tough on crime," a thinly-veiled appeal to their desire to reinstate control over black bodies, according to legal scholar and author Michelle Alexander.

Nixon won the election in 1968. Shortly after, he launched the war on drugs, which morphed from rhetoric to devastating policy over the course of his presidency and others that followed. Under presidents Jimmy Carter, Ronald Reagan, George H.W. Bush, Bill Clinton and George W. Bush, incarceration rates skyrocketed — especially among blacks — while wealth and employment gaps between black and white Americans grew wider or remained stagnant.

Today's political climate has similar features to that of the late 1960s. Racial inequality is as stark as it's ever been. Americans are more concerned about racism than they've been in a long time. And once again, protests and uprisings are galvanizing a generation of advocates and allies, from Ferguson, Missouri, to Baltimore and elsewhere in between.

Trump, like many of his fellow 2016 candidates, has apparently recognized the importance of appealing to this voting bloc if he hopes to win the presidency. But no rhetorical gesture aimed at superficially appealing to the #BlackLivesMatter movement can hide the danger of his claim — that anti-black police violence should somehow be met by an increase in police power.

Because, for at least the past half-century, this increase in law enforcement practices has only correlated with more black people being killed, brutalized, locked up or permanently disenfranchised. History suggests that "we need more police" is incompatible with the phrase "black lives matter." Trump's tactic may have fooled voters in the past — after all, harsher policing and punitive punishment have fueled presidential, local and judicial elections for much of the past century.