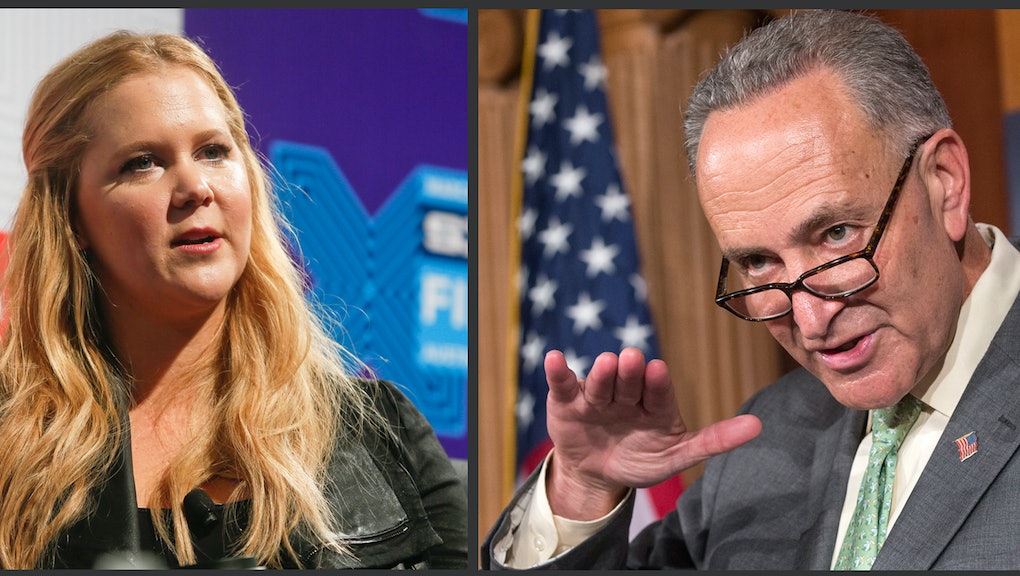 Comedian Amy Schumer joined her cousin Sen. Chuck Schumer on Monday to lay out the senator's proposed three-part plan that will further restrict violent criminals and the mentally ill from obtaining guns.

During the morning press conference, Schumer said she wanted to help develop a plan with her cousin that would "actually be passed," focusing on restricting only certain people from obtaining weapons rather than "taking away people's guns" the Inside Amy Schumer star said.

The legislation, proposed by the Democratic senator from New York, will reward states that report comprehensive information on background check records for gun purchases and registration, and will punish states that do not adhere to the reform. The Schumers collectively called on the Department of Justice for advice and insight into how states can better deal with "involuntary mental health commitments."

The Schumers came together to develop a plan for tighter gun control following the nation's most recent mass shooting on July 23, during a screening of Amy Schumer's new movie Trainwreck in Lafayette, Louisiana. The gunman killed two and injured nine others before taking his own life.

Schumer told her Twitter followers she would be working on a project against gun violence following the attack in Louisiana. The stand-up comic, who first expressed her sorrow the night of the shooting, responded Aug. 1 to an open letter on the mass shooting directed toward her.

"These are my first public comments on gun violence, but they won't be my last," Amy Schumer told the press on Monday. The senator, who thanked his cousin for joining him in his goal to not allow mass shootings to become commonplace, attributed her position in Hollywood and the media for being a helpful tool in the fight for greater gun control.

However, when asked if she believes her voice will be able to help influence members of government to pass a bill on gun control, the actress answered in pure Schumer fashion: