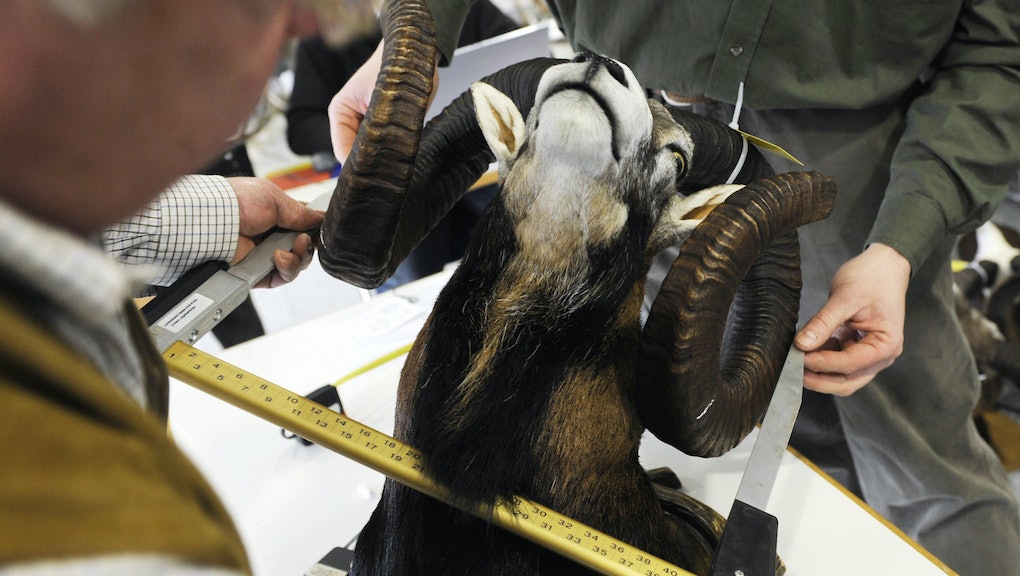 Minnesota dentist Walter Palmer set off a firestorm in July with a photo of himself proudly posing with Cecil the lion, the pride of Zimbabwe's Hwange National Park's lion stock, whom he had illegally slain with a bow and rifle.

The world found the photo outrageous. But the kind of image Palmer posted to his Facebook page, causing hundreds of thousands of people worldwide to condemn his actions, can be readily found at any number of sport hunting-themed websites.

In threads on HuntingNet, users share photos of themselves posing with a variety of freshly killed animals.

Threads on the board, however, contain debates about the ethics of hunting exotic animals, with some users arguing exotic game preserves give hunters a bad name.

A separate discussion forum called Africa Hunting contains over 38,000 photos with nearly 29.2 million views, including a section named "unusual trophies" that features images of kills of animals like porcupines, hyenas, vipers and dik-diks.

In another section with over 13,000 photos titled "Hunting Africa," users submit photos of hunters proudly posing with zebra, antelope and buffalo.

On Reddit, a thriving hunting community shares photos of kills on a daily basis.

Instead of a dead animal, though, the top-rated post in /r/hunting was a defense of hunters' contribution to conservation efforts.

"Most of us are pretty alright guys, we're educated and we care about the environment," the creator of the image captioned his post. "We want to pass down our traditions to our kids and have them come into a planet worth inheriting. In short, we care. And I'm tired of us being treated like murdering psychos for following our traditions."

Other posts on the subreddit, however, did celebrate kills.

The proliferation of online hunting hotspots might serve as context for the larger sport community that men like Palmer are engaged in every day, as well as highlight how the focus on Cecil is just the tip of the iceberg. South Africa's hunting industry alone earns $744 million a year, attracting 9,000 trophy hunters annually.

"Hunters are always quick to justify themselves: We provide financial support to wildlife conservation efforts! We perform necessary herd-thinning functions! We eat what we kill!" the Chicago Tribune's Eric Zorn wrote in a 2002 column on the ethics of hunting. "Even if those answers are true, they sidestep the essential question: How can you take pleasure in being the instrument of the death of one of nature's creatures?"

In a response also published in the Chicago Tribune, lifelong hunter Scott Brasier argued, "Hunters are certainly not in denial. We are keenly aware that our activity, when successful, will result in the death of our quarry. But whereas your argument begins and ends at the moment of death, hunters see it as a small part of a bigger picture ... It is also traditional and deeply rooted in our heritage."

Marc Moffett, a philosopher who has written on the ethics of hunting, recently told the Washington Post the focus on Cecil the lion's celebrity status obscured larger concerns about the morality of paid trophy hunts, which often give the animal no fair chance to escape.

"There is the killing of this well-known, highly regarded, high-profile kind of quasi-celebrity animal and that has understandably got people upset," he told the paper. "But I don't think that's the main issue involved."

"If the animal had not been well-known, not had this celebrity status and even if it had not been poached – I don't know if there was anything illegal done or not – I think there are ethical problems with the nature of the hunt that [Palmer] was engaged in," he added.