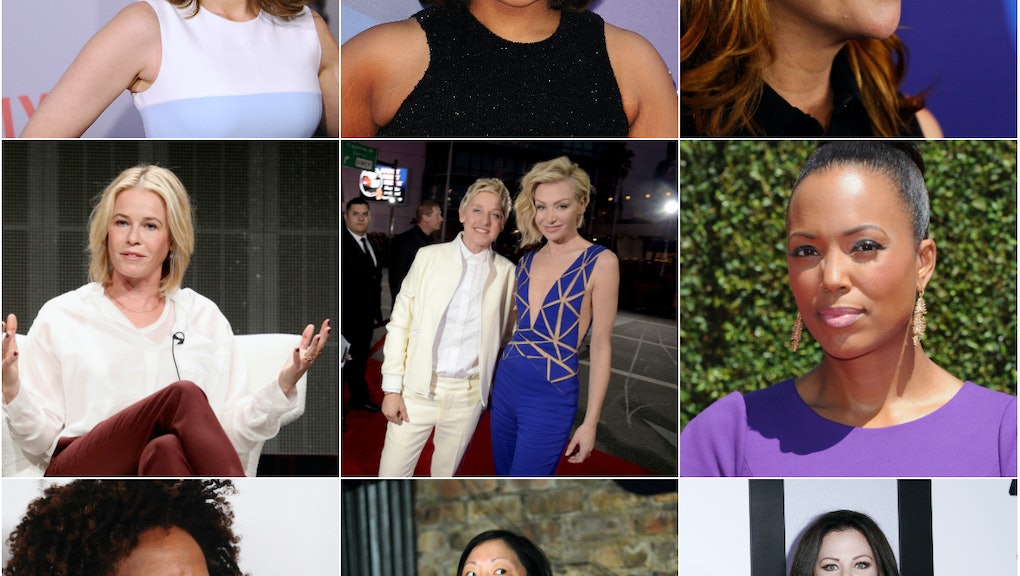 Amy Schumer's wild success this year can largely be attributed to her on-point takes on sex and relationships. Whether she's encouraging women to demand the orgasms they deserve or shining a light on the shittier side of falling in love, girlfriend can always be counted on to keep it real.

But the Trainwreck star isn't the only woman in comedy dishing on sex and dating issues. These 11 funny chicks are regularly serving up nuggets of wisdom to help you navigate the wilds of the dating world and beyond.

1. Margaret Cho - "Find out how to share that desire with a partner."

In an online video feature for the TLC show All About Sex, comedian Margaret Cho tells us that the key to spicing up your love life is to get in touch with your inner freak. "Think about what really pleases you," she says. "People should really look to themselves and figure out what they want, and then find out how to share that desire with a partner."

When asked about her "sex rules" during an interview with Conan O'Brien last year, Chelsea Handler made it clear that she's not here for guys who keep their socks on while getting busy. "You need to take your socks off," she told the late night host. "Everyone needs to take their socks off."

Tina Fey's 2011 book Bossypants helped solidify her status not only as a comedy hero, but also as a dating guru of sorts. The highly quotable memoir included the following piece of timeless relationship advice. While it was ostensibly meant for aspiring comedians, it'll likely ring true regardless of your profession: "Remember that talent is not sexually transmittable. You don't have to date the 'comedy person,' the funniest or most talented person — just date someone who's good to you."

4. Mindy Kaling - "I simply regard romantic comedies as a genre of sci-fi."

In her 2011 book Is Everyone Hanging Out Without Me?, Mindy Kaling advised readers on how to put the unrealistic relationship standards in romantic comedies into perspective. "I simply regard romantic comedies as a subgenre of sci-fi," she wrote, "in which the world created therein has different rules than my regular human world."

5. Ellen DeGeneres - "Find that person that gets you, wants to take care of you, wants the best for you."

When asked how she keeps the love alive in her marriage to Portia de Rossi, Ellen DeGeneres told People in 2014 that it's important to be with someone who constantly surprises you. "The truth is, and this is corny, I fall more in love with Portia all the time. I really do. She surprises me all the time. It's what anyone experiences when you find that person that gets you, wants to take care of you, wants the best for you. We're really lucky because we know how rare it is."

In a YouTube series called "Ask Lena," the Girls writer/director/star answers a question from a girl who had a habit of falling in love with assholes. "You have to love yourself to love someone who is going to love you," Dunham tells her fan. "When you feel a lot of negativity towards yourself, you're almost sexually attracted to people who are going to reflect that back at you. When you learn to love and appreciate those qualities that you've tried so hard to suppress, suddenly that behavior is just not going to be charming to you anymore."

7. Amy Poehler - "Vulnerability is the key to happiness."

In a 2013 segment of the Yes Please author's "Ask Amy" YouTube advice series, Amy Poehler explains to a viewer that falling in love is scary because it makes you vulnerable. But that vulnerability is what also makes it so rewarding. "Vulnerability is the key to happiness. Vulnerable people are powerful people," she says. "Opening your heart and sharing it means that you're going to get so much love in your life."

In a YouTube interview from 2012, Wanda Sykes is asked how she makes her marriage to partner Alex Niedbalski work. "It's all about compromise," she says. "We have fun. We enjoy each other, we're friends. ... But you gotta have some give and take." Sykes closes by adding, "If you snore, get ear plugs."

The hilarious co-host of The Talk wrote a tongue-in-cheek article for Glamour in 2013 in light of the Anthony Weiner dick pic scandal. In the piece, Tyler implored couples not to follow Weiner's example and to keep it real with each other. "Tell the truth. All the time," she told readers. "It may be painful at first, even foreign. But with all the evidence out there in the ether, honesty has never been a better policy."

Sarah Silverman doesn't believe in marriage, but that doesn't mean she's against love. When Howard Stern asked her in a September 2014 interview, "How does one make a lifetime commitment with you, but not call it marriage?" Her answer was simple: "Just be in love every day."

11. Melissa McCarthy - "You find the nicest guy in the world, and you marry him."

At the premiere for her movie Tammy, actress/producer/writer Melissa McCarthy told Entertainment Tonight that the secret to her happy marriage with fellow actor and director Ben Falcone wasn't complicated at all: "You find the nicest guy in the world, and you marry him."