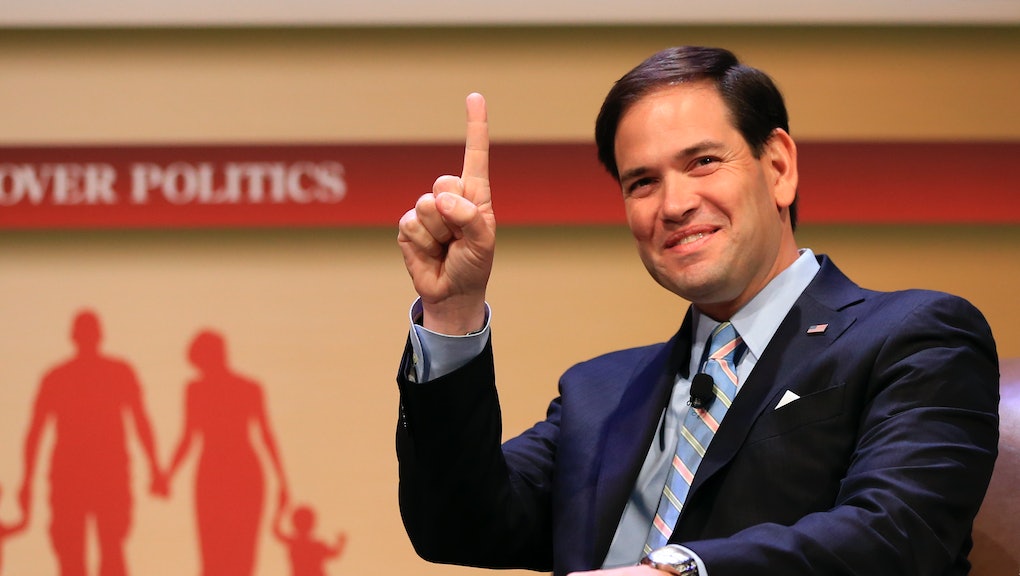 Marco Rubio: Where the 2016 Candidate Stands on Abortion, Immigration and Student Debt

Marco Rubio, the junior United States senator from Florida, formally announced his run for presidency in April, but Republicans have had their eye on him since Mitt Romney considered him for a possible VP spot in 2012. Still, many voters don't know much about the 44-year-old senator or his stance on big issues, considering his four-year tenure in the Senate.

However, Rubio has made his take on certain issues abundantly clear.

On abortion: In a speech at the 2013 CPAC conference, Rubio told audiences he is anti-abortion, but argued, "Just because I believe that states should have the right to define marriage in the traditional way does not make me a bigot."

On climate change: Regarding climate change and the environment, Rubio took a similarly hard line, but again argued that such a position shouldn't categorize him in a negative light.

"Just because we believe that life, all human life, is worthy of protection at every stage of its development does not make me a chauvinist," Rubio told the CPAC crowd in 2013. "In fact, the people who are actually close-minded in American politics are the people that love to preach about the certainty about science with regards to our climate, but ignore the absolute fact that science has proven that life begins at conception."

MSNBC reports that Rubio fought back against criticisms of his views on global warming on The Sean Hannity Show in 2014, saying, "Let me give you a bit of settled science that they'll never admit to: The science is settled, it's not even a consensus, it is a unanimity, that human life begins at conception. I hope the next time someone wags their finger about science, they'll ask one of these leaders on the left, 'Do you agree with the consensus of science that human life begins at conception?"

As MSNBC points out, no such consensus exists in the scientific community, and "life" and "conception" are mostly subjective terms.

On student loans: Rubio received a bachelor's in political science from Florida State University and a law degree from the University of Miami. Although since graduating, he has gone from the House of Representatives to the Senate, he hadn't paid off his student loan debt of roughly $100,000, the Huffington Post reported in April.

To that end, Rubio has repeatedly spoken on college affordability, describing the process of enrolling in financial aid as "confusing and bureaucratic" and calling the federal loan program "a myriad of nonacademic pursuits," according to U.S. News and World Report.

Since his start in politics, Rubio has co-sponsored three separate bills aimed at reforming student loans with repayment plans based on income, as well as private financing options for post-secondary education. Although none of those bills made it to Congress, the topic seems to be one Rubio may continue attacking for some time.

"We have a broken enforcement system on immigration," he told Face the Nation. "We have a legal immigration system that's outdated and needs to be modernized so we can win the global competition for talent."

When discussing the fact that more than 11.4 million undocumented immigrants lived in the United States in 2012, Rubio said he would prefer to find a solution that doesn't include removing those people from their homes and deporting them to their native countries.

"The only way we're going to be able to address it — and I believe we should — is through a sequence of bills that begins by proving to people that illegal immigration is under control, modernizing our legal immigration system and then dealing with those who are here illegally," he told Face the Nation.