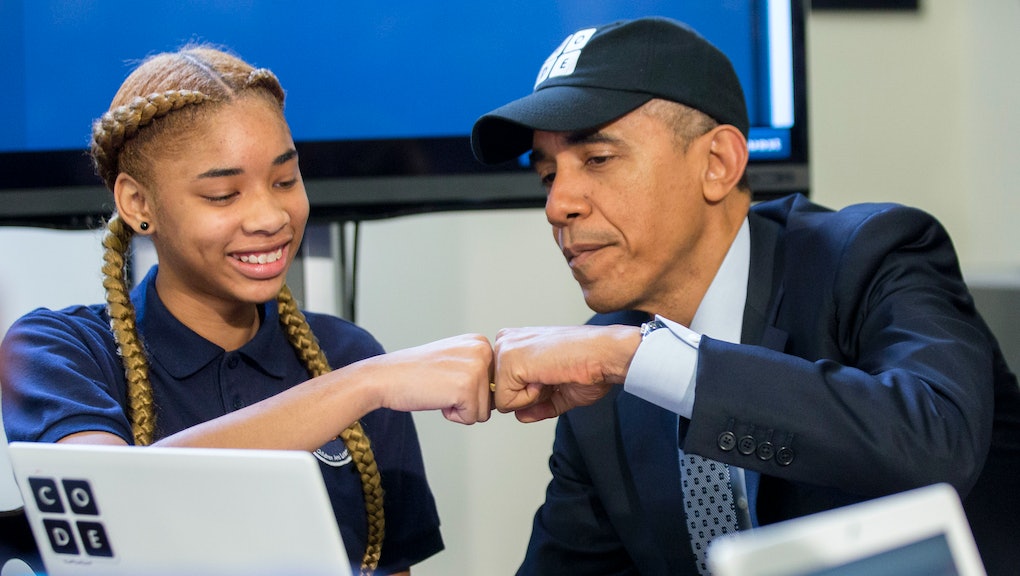 Obama's Getting Serious About the Future of Supercomputing. Here's Why That's Awesome

Gird your technological loins, world: President Barack Obama is paving the way for the Usain Bolt of computers with the processing power of the human brain.

A technology program called the National Strategic Computing Initiative seeks to invest heavily in high-performance hardware. The goal is to position the United States as the king of the supercomputing mountain. The speed it's going for: one exaflop, or almost 30 times faster than the fastest computer in the world, China's Tianhe-2, below.

But what can you actually do with an exaflop of power? Is this like upgrading a graphics card to kick more ass in Call of Duty? Or can this superfast processor unlock a higher plane of mathematical capability?

With an exaflop of computing power, scientists and researchers would be able to run incredibly complex and accurate simulations, like simulating the global climate to make global warming predictions.

The ability to handle a lot of data might be the supercomputer's largest contribution. Think of all the simulations you can run: modeling aircraft, modeling guns, predicting weather anomalies or even figuring out long-term dilemmas, like what the agricultural industry's impact will be in, say, 50 years.

Supercomputing and the future of medicine: "When we think about climate change or discovering a new drug that works with the chemistry of the brain, that requires a tremendous amount of computing power," Terry Moore, associate director of the Innovative Computing Laboratory at the University of Tennessee, told Mic. "The higher you can make the resolution of your simulation, the faster you can uncover new discoveries."

It could also be used to crack difficult cryptography, potentially thwarting cyberattacks.

But it's not just simulations. Medicine takes all kinds of analysis, deep dives into our DNA and biological informatics — things that take a level of computing power we've scratched but haven't come close to mastering. The White House's Precision Medicine Initiative would use high-performance computing to collect and create huge amounts of health and genomic data to tailor treatment for individuals.

"When you're exploring new drugs, the number of possible combinations is immense," Moore said. "We'd like to be able to develop simulations of body chemistry that would allow us to actually find the most plausible candidate without having to test them on living animals."

An exaflop's worth of national security: That same ability to dig through strands of DNA and climb into the annals of human genomics also makes it a great machine for detecting terror plots, or for being an extremely powerful — and potentially invasive — security system.

With a computer able to run 10 quintillion operations every second, it could be used to crack difficult cryptography, potentially thwarting cyberattacks.

Here's where it gets harder to predict, but extremely exciting: According to the Human Brain Project director Henry Markram, it would take roughly an exaflop of computing power to simulate the human brain. And while current predictions put that timeline around 2020 to 2025, it could be an extremely important step on the path toward major breakthroughs in artificial intelligence, and a much better understanding of our brains in general.

All of this sounds game-changing. But reaching an exaflop of computing power isn't easy.

Thirty years ago, Steve Jobs dreamed of a computer that could someday fit in a folding notebook. Fifteen years ago, an iPhone was practically unimaginable. An exascale computer is a massive undertaking — and now we're running out of room to get smaller.

"There's been a revolution caused by the fact that we're running to the end of Moore's law," Moore said. "There are power limits that we didn't have since the middle of the previous decade. Energy is a big factor. In some sense, we've hit the wall and have to take energy as a first-class design constraint now."

When you do computation, most of the energy costs are coming from moving data around. The trick is to develop algorithms that can minimize the data movement, so when you run computations, you can reduce the energy needed each time.

But it may just mean innovating in a different direction. Instead of thinking in terms of traditional computing methods, there may be a push to move to optical computing, a light-driven means of operating that can move tremendously fast with minimal energy.

The competition: Besides the Olympics, the tech race is one of the last nonviolent frontiers of international competition. Almost the same day Obama announced the initiative, China announced plans to build one of the fastest astronomical computers — to back up its new 500-meter-aperture spherical telescope, which, at roughly 30 football fields in size, will be the largest radio telescope in history. The country plans to use it to find aliens and dark matter.

Unlocking exascale computing could catapult our understanding of the planet and the universe into the future by simulating environments and scenarios we wouldn't be able to accomplish in reality. If the United States needs some healthy us-versus-them competition to get everyone excited about supercomputing, so be it.