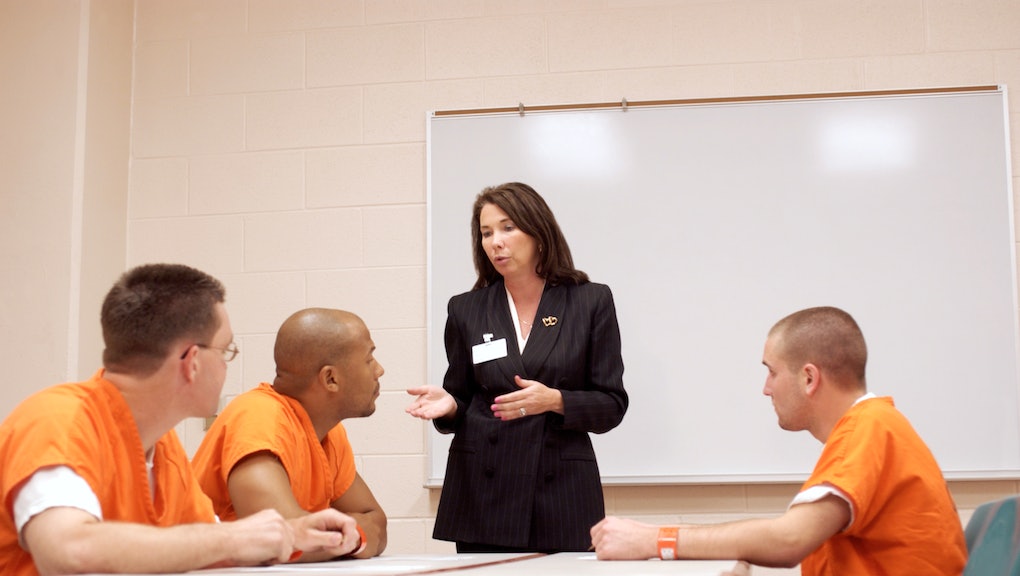 Over the past few months, the Obama administration has made efforts to address the student debt crisis and mass incarceration. Last week, it struck at both problems with one blow.

On Friday, the Education Department announced a pilot program to allow some incarcerated Americans to receive Pell Grants to pursue higher education. The purpose of the program is to prepare prisoners for smoother reentry into society upon finishing their sentences, and it will serve as a case study for the effects of facilitating prisoner access to continued education.

"Giving people who have made mistakes in their lives a chance to get back on track and become contributing members of society is fundamental to who we are — it can also be a cost-saver for taxpayers," Education Secretary Arne Duncan said in a statement.

Pell Grants — financial aid for low-income students that does not have to be repaid to the government — were once accessible to prisoners. Through the early 1990s, colleges and universities had more than 350 programs at prisons to instruct inmates in various disciplines and help them acquire certificates and degrees. But the 1994 crime bill passed during the Clinton administration — a sweeping piece of legislation that made the American criminal justice system far less forgiving — did away with the grants. At the same time, many states cut prisoners' access to state-level tuition assistance. The combination of those two actions drastically reduced access to education for prisoners. The number of college programs at prisons soon fell to the dozens, Fred Patrick, director of the Center on Sentencing and Corrections at the Vera Institute of Justice, told Mic.

The Obama administration's pilot program also highlights among Democrats a general interest in expanding the use of Pell Grants to help the less fortunate. Pell Grants were originally designed to make college free or very cheap for the most socioeconomically vulnerable members of society (and were available to prisoners from their beginning) but their value has declined over the past few decades.

The administration's effort, should it succeed, will build evidence for investing more in Pell Grants and overturning the current ban on providing them for incarcerated Americans. But the experiment is also likely to confirm what we already know: Educating prisoners works.

What does higher education do? A seminal 2013 study by the Rand Corporation surveyed programs providing education to incarcerated adults. Researchers found that participants were 43% less likely to return to prison within three years of release than prisoners who didn't participate in education or vocational programs, and that their chances of finding a job were 13% to 28% higher. The study also found that for every $1 invested in prisoner education, $4 to $5 were saved in reduced incarceration costs.

"Beyond those numbers, however, are real human beings — mothers, fathers, sons, daughters, parents, children and neighbors — who are directly impacted by incarceration and its negative impact on a person's ability to positively and productively move forward after completing his or her prison sentence," Patrick told Mic while discussing the Rand study. "Let's face it, social and economic mobility in our rapidly evolving economy increasingly requires a college education."

The Bard Prison Initiative is a particularly compelling example of the power of educational offerings in prison. It's a competitive program that offers degree from Bard College, offered across half a dozen medium- and maximum-security prisons in New York state. The initiative reports that among its formerly incarcerated students, fewer than 4% have returned to prison. It also boasts of its efficiency: "The estimated cost per person, per year of the BPI program is a small fraction of the price of continuing incarceration. It saves tax payers money, while increasing public safety."

These reduced recidivism rates for prisoners with access to higher education shouldn't be surprising. Developing knowledge and skills while in prison cultivates purpose and discipline, and is one of the most effective tools for convincing potential future employers that a prisoner has done more than stagnated behind bars.

Rehabilitation or debilitation? Stripping Pell Grants from prisoners was the logical outcome of a society that has come to believe in "perpetual punishment" for its criminals, explains Patrick.

"There are over 45,000 laws and rules in U.S. jurisdictions that restrict opportunities and benefits in areas such employment, occupational licenses, voting, access to public housing and access to higher education," says Patrick. "We've lost sight of the notion of an individual paying his or her debt to society via the imposed sentence and then moving beyond that as a full-standing member of society."

Back in 1994 before the crime bill was passed into law, the late Democratic Sen. Claiborne Pell — namesake of the Pell Grant — warned against this, and pleaded to keep the aid for incarcerated students: "Education is our primary hope for rehabilitating prisoners. Without education, I am afraid most inmates leave prison only to return to a life of crime."

Obama's limited pilot program does not guarantee a restoration of the Pell Grant, but it's a step in the right direction.