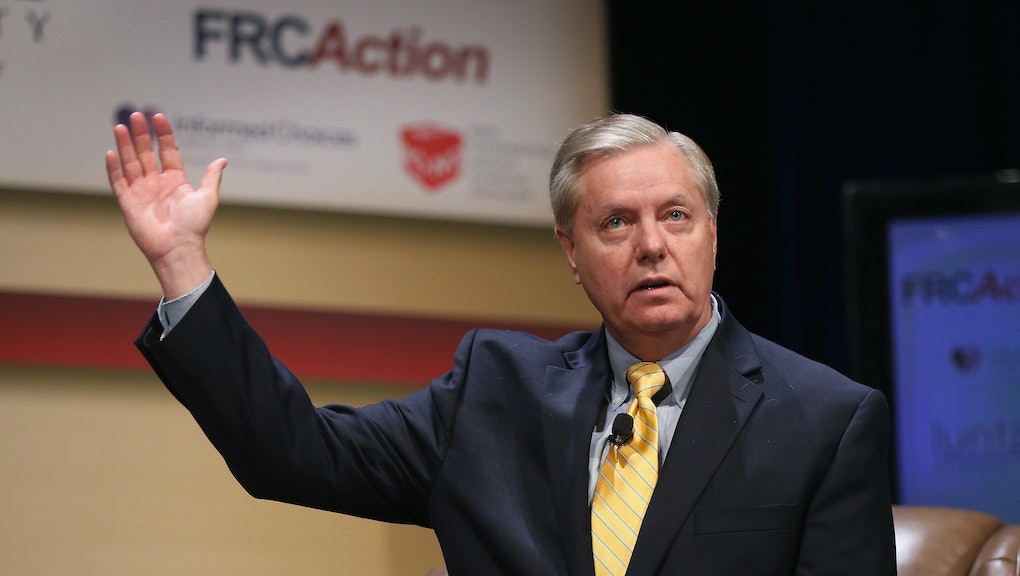 South Carolina Sen. Lindsey Graham first came on the national scene during former President Bill Clinton's impeachment proceedings in 1998, when he served on the House Judiciary Committee. On Monday night, Graham called on Bill's infidelity to suggest Hillary Clinton could not be trusted in the White House.

"I'm fluent in Clintonspeak," Graham said during an early round of questions at the Voters First forum in New Hampshire. "When Bill says, 'I didn't have sex with that woman,' he did! When she says, 'I'll tell you about building the pipeline when I get to be president,' she won't!"

During a town hall event in New Hampshire last week, Clinton refused to take a position on whether the Obama administration should allow the construction of the Keystone XL pipeline. Climate activists strongly oppose it.

"This is President Obama's decision, and I am not going to second-guess him, because I was in a position to set this in motion and I do not think that would be the right thing to do," Clinton said, referring to her involvement in negotiations during her time as secretary of state. "So I want to wait and see what he and Secretary Kerry decide. If it's undecided when I become president, I will answer your question."

Graham then alluded to the continuing fallout over Clinton's use of a private email account and server during her time as secretary of state:

Graham is a longshot to make the Republican presidential debate stage, so he was out to make waves at this rapid-fire event in Manchester, New Hampshire. Currently polling near the bottom of this 17-candidate deep GOP field, he will likely take part in the mini-debate scheduled for 5 p.m. EDT Thursday, four hours before the top 10 polling contenders ascend for their primetime showdown.

You can watch Graham's segment here. His riff on the Clintons is toward the end: