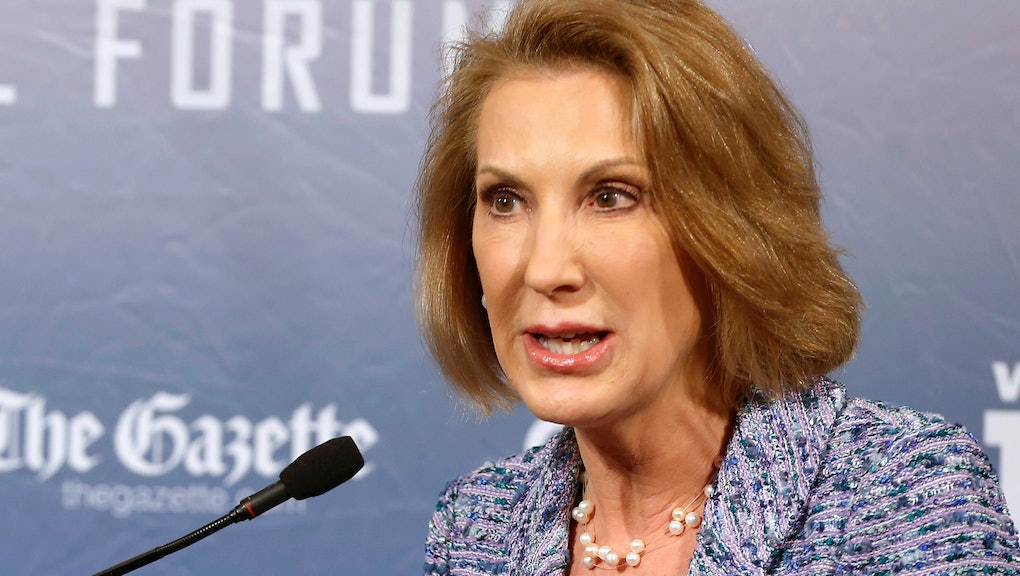 There was only one woman in the Republican forum Monday night, but don't fret, she definitely got the token lady questions, so there's no risk we'll forget she's female. No one asked Carly Fiorina about how her meatloaf recipe measures up to Democratic hopeful Hillary Clinton's, but she was asked to talk about moments she was not popular — and there was hinting at a catfight between her and that other woman running.

Each of Fiorina's fellow Republicans fielded two, one-on-one rounds of questions from moderator Jack Heath of WGIR-AM, based out of Manchester, New Hampshire. And while her male opponents fielded rigorous policy questions related to the Iran deal or tax reform, Heath's first round of questions for Fiorina began with, "This is a personal but also a professional question..." Not a good sign that it would be a gender-neutral concern.

Heath proceeded to ask, "What's the least-popular action you've taken as a leader and what did you learn from it?" Fiorina's second question was about Clinton's email scandal, and the third was about whether the federal government should continue to fund Planned Parenthood. Not bad questions, just unnecessarily woman-specific ones.

Fiorina didn't blink and answered the questions eloquently (as strongly as her second round of questions, which were more policy based). She has experience with this — Monday's candidate forum isn't her first sexist interview rodeo. In a June op-ed where she identified as a feminist on Medium, she revealed some of the god-awful questions she's had to answer since announcing her candidacy.

"Just last month in fact, a reporter said he'd never talked to a presidential candidate with pink nail polish. Another reporter asked me if I thought hormones would prevent a woman from serving in the Oval Office," she explained. "Here's a question for you, ladies. Can you think of an example of when a man's judgment has been clouded by hormones?—?including in the Oval Office?"

She's right. Although male politicians often show emotion, women are the often the only ones who get criticized for it or whose hormonal cycles are publicly debated by pundits.

Fiorina's question about popularity echoes questions posed to Clinton during the 2008 Democratic debate in New Hampshire, where she was asked about her "likability" by the moderator. Obama famously quipped, "You're likeable enough, Hillary." The smug remark eventually cost him political points during the campaign.

The first woman to be named CEO of a Fortune 50 company didn't address the obtuse nature of her first question but did squeeze in, "sometimes the right questions don't get asked in a presidential debate," which may or may not have been a wink at her own moderator.

In his defense, Heath changed gears (or checked Twitter) and asked her about the economy and ISIS upon her return to the stage. Despite the initial set of questions, Fiorina was arguably the most direct and compelling candidate in Monday's Republican town hall. Imagine how well she could have performed had she been asked the same questions as everyone else.