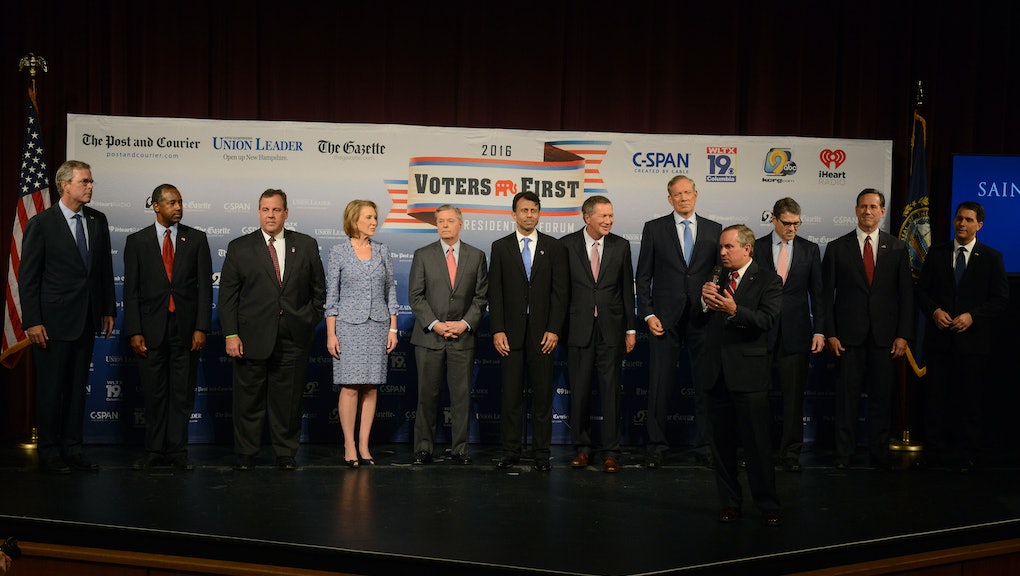 The One Name That Didn't Come Up in the Voters First Forum? Donald Trump

Fourteen Republican candidates participated in a presidential forum at St. Anselm College in Manchester, New Hampshire on Monday night. The event was devoid of news — anyone who has been even casually following the campaign thus far has heard everything that was said on stage at the Voters First Forum.

But hardly anyone who isn't paid to follow the day-to-day back-and-forth has been paying much attention. Most Americans' exposure to this campaign has been dominated by two words: Donald Trump.

The New Hampshire forum, which Trump did not attend, inadvertently gave us some insights into how the rest of the field might deal with him when they gather on Thursday in Cleveland for the first primary season debate. Namely, that they won't.

Sticking to the script: For all the talk about how Trump's presence could influence the first debate, his name didn't come up once at the forum on Monday. (Trump's non-participation certainly had something to do with it, as did the moderator's insistence on avoiding asking questions about him.) The 14 candidates instead stuck to the script, rarely veering off-base to engage in news-making soundbites. Each candidate crammed as many talking points as possible into the eight or so minutes allotted to them over the course of the two-hour event. This was due in part to the format of the event itself: Candidates appeared one at a time and took questions from the moderator while the other participants sat and watched from the seats.

The candidates were laser-focused on getting out their own messages, taking advantage of the small amount of time they had to push the issues that are central to their campaigns. Even former Texas Gov. Rick Perry, who has been the most strident critic of Trump, spoke at length about immigration without mentioning Trump's role in elevating the issue in the campaign.

Unless provoked by the Donald directly or asked by the moderators to respond to one of Trump's many verbal flourishes, one could see a scenario in which the candidates go to great lengths to avoid engaging Trump in the first debate on Thursday. Besides making headlines with a clip-ready exchange, the candidates don't appear to see an upside in getting caught up in a contentious blow-up. The campaign is a marathon, not a sprint, after all, and the candidates onstage Thursday seemed to indicate they're more interested in playing to the voters than getting down in the mud with the real estate mogul.

Trump's play: Trump has come to lead most major national polls largely due to his bombastic style and no-holds-barred supposed truth-telling, but he's recently indicated that he might be more well-behaved during Thursday's debate. Perhaps he realizes that there is a limit to showmanship, even for Trump:

Whether Trump sticks to that intention is about as predictable as the Republican primary campaign itself — which is to say, not very. But on the chance he does, and the rest of the candidates stick to their scripts, the first debate might not include the type of fireworks that political obsessives are salivating over.