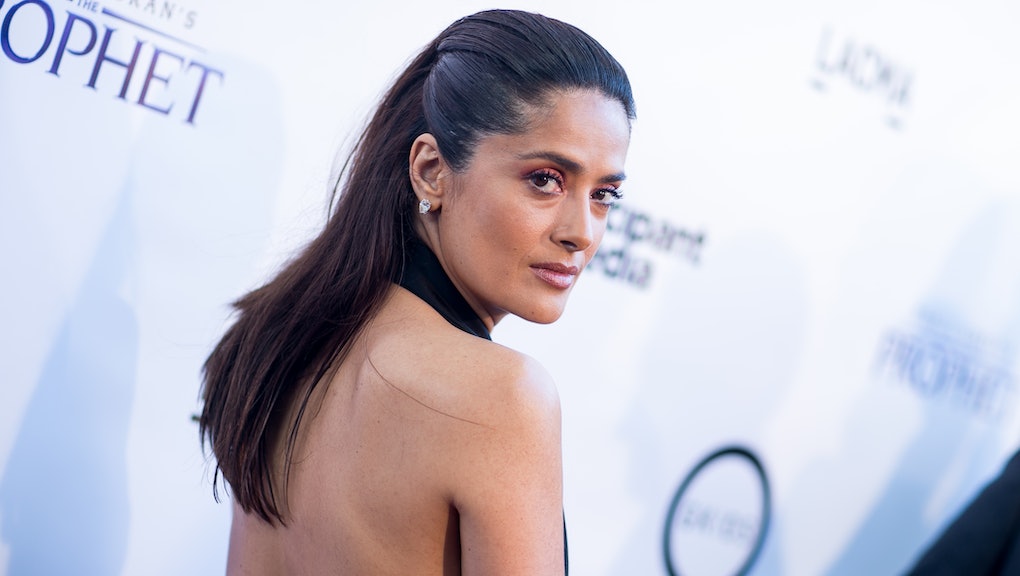 Salma Hayek has some tough words for Donald Trump.

The Hollywood star spoke out Friday during an interview with the Los Angeles Times to promote her new animated feature, Kahlil Gibran's The Prophet. When asked about the billionaire Republican presidential frontrunner and his comments on immigration, the Mexican star was unsparing.

"It's a very simple tactic for self-promotion," she told the LA Times, adding:

"What's sad is how easily people are manipulated. I'm not insulted because I cannot be insulted by stupidity. Everybody's entitled to have uninformed opinions. Everybody's entitled to be dumb. But I'm not dumb, so I see through the manipulation. We have something to learn from this. That is that the educated people or the people with great human values have to wake up, because they are under the illusion that most of this country is like them and sometimes they don't even go to vote."

Hayek seemed to be most specifically referring to Trump's June 16 presidential announcement, when the now-Republican-frontrunner decried undocumented Mexican immigration to the United States, calling offenders rapists, criminals and drug dealers.

The fallout from his immigration stance and other flaps, however, appears to have only strengthened the billionaire's momentum.

On Monday, Trump skipped a candidate forum broadcast by C-SPAN that 14 other candidates attended, meaning all eyes will be on his performance Thursday at the first official Republican debate on Fox News. While the other nine candidates who will stand beside him are feverishly preparing, Trump spent the weekend in Scotland attending the British Women's Open at his Trump Turnberry resort. The candidate, who is expected to take center stage, has taken every opportunity to downplay expectations, saying he is "not a debater" and is reportedly not even preparing for the big night.