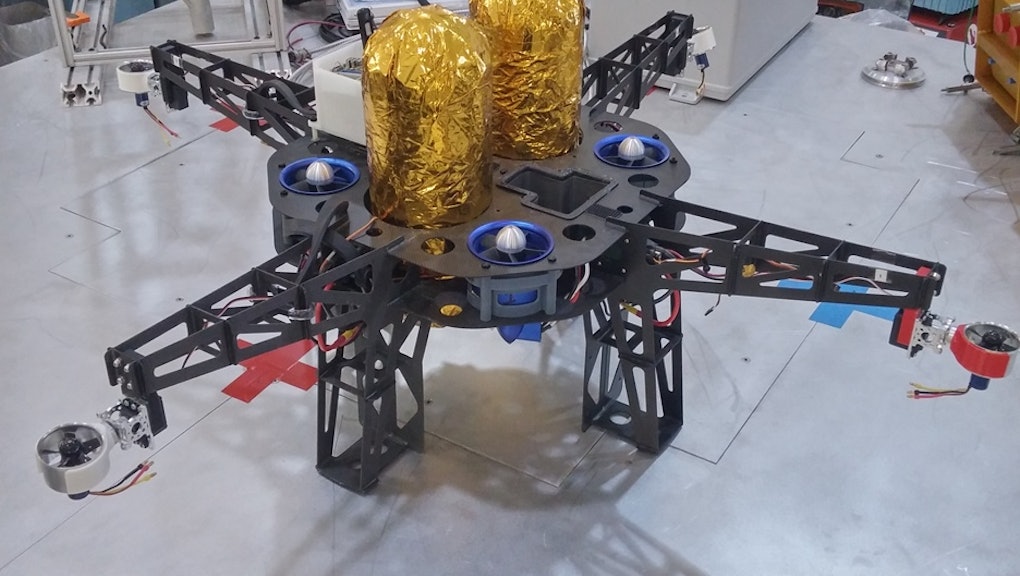 These Are the 3-D Printed Robots That Will Explore Mars

NASA had a pretty great July. Its Pluto fly-by, nine years in the making, was a success, and it presented the world with brand new photos of space. Then, as July was coming to a close, NASA announced one of the most exciting bits of Mars news yet: The first prospectors of the red planet will be drones, 3-D printed in space.

NASA's incredibly cool-sounding Extreme Access Flyers, from the equally cool-sounding Swamp Works Lab, are flying robots that look like quad-copter drones. They're built to operate in the thin atmosphere of Mars and the airless pockets of space in asteroids and the moon. The "extreme" part comes from their ability to go down into pitch-black craters, pull out soil and see if there's any evidence of water ice.

They're also self-sustaining, designed to run on the propellants, or fuel, derived from the minerals found on other planets. That means these drones could be printed in space and fueled by what they find while they're searching. Ideally, no fuel would ever need to be shuttled up from Earth.

"The first step in being able to use resources on Mars or an asteroid is to find out where the resources are," Rob Mueller, senior technologist for advanced projects at Swamp Works, said in a NASA press release. "They are most likely in hard-to-access areas where there is permanent shadow. Some of the crater walls are angled 30 degrees or more, and that's far too steep for a traditional rover to navigate and climb."

What's really important here is how this reflects the advancement of technology. A few years ago, 3-D printing wasn't even in the public's consciousness. Every flight was a huge deal and garnered a lot of attention. Now we have laser guidance, GPS systems, unmanned flights and 3-D printers the size of an old Macintosh computer. NASA can use some motorized parts and larger, tailorable 3-D printed pieces to build entire robots capable of telling us how habitable a planet is.

Here's the kicker. Volcanoes, like the ones scientists know to exist on Mars, have what are called lava tubes that can be 30 feet or larger in diameter — plenty of space for astronauts to seek shelter while they run missions. NASA's drones will explore them, hoping to find habitable space. "You could put a whole habitat inside a lava tube to shelter astronauts from radiation, thermal extremes, weather and micrometeorites," Mueller said in the release.

If everything goes right, these Extreme Access Flyers could pave the way to putting human feet on Mars. Not bad for something hot off a printer.