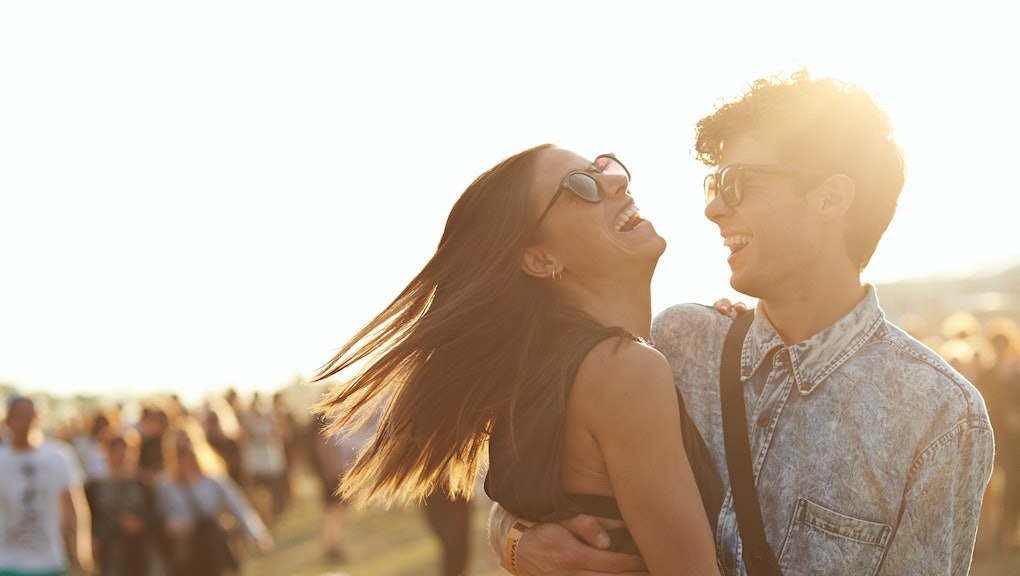 The Relationship Is Dead. Here's What's Taking Its Place

"Our relationship was one constant text," Kimberly, 27, told Mic. "He'd text me first thing in the morning, message me during the workday and then text me at night."

Kimberly helped Glen* pick out new clothes. She was the first person he called when he passed an exam, and she advised him on what to get his sister for her birthday. On weekends, Kimberly, Glen and their friends would go out drinking and they would always manage to find themselves in a corner of the bar together. She was doing everything a girlfriend would, with one caveat: She didn't have the girlfriend "title."

It (whatever it was) lasted seven months.

Welcome to noncommitment culture. "Boyfriends" and "girlfriends" have been switched up for "this guy I'm hanging out with," "this girl I'm seeing," or merely "this person I have a thing with." Deep philosophical conversations happen in emoji, meeting the parents is off the table and asking questions like "Hey, what are we doing here?" is strictly verboten. People carry on monthslong or even yearslong relationships for which no terms can be applied.

Despite the recent slew of panicked trend pieces about the dangers of hookup culture, millennials aren't riding on a carousel of one-night stands and borrowed toothbrushes — they're avoiding getting on the carousel altogether. It's not that we're not interested in dating, and it's not that we're only interested in hooking up. We care — we're just not committing.

We care less about rushing to settle down. While the demise of the committed relationship might strike panic in the hearts of the previous generation, most millennials know that there are plenty of benefits to dating someone (or many people) nonexclusively. And contrary to the stereotype, the commitment isn't gendered: As of 2007, single women were the fastest-growing segment of the American population, implying that the tendency to avoid commitment goes both ways.

The resistance to settling down goes hand in hand with our generational acceptance of casual sex and a rising marriage age. According to 2013 data from the University of Virginia National Marriage Project, the average age of first marriage is 27 for women and 29 for men — a huge increase from 1970, when the median ages were 20 and 23, respectively. Oh, and fewer of us are getting hitched.

The numbers also expose our lack of interest in cohabitation. According to data released by Gallup, while just 16% of people between the ages of 18 and 29 were married in 2014, even fewer — 14% — were living with a partner. That means a whopping 64% of millennials were single and living alone, a dramatically larger number than the 52% reported in 2004.

We're also kind of busy. Part of our avoidance is because, as we love to tell each other, we're busy. "Being in a committed relationship seems like so much time, work and energy than just spending time with someone I like without a lot of pressure," Casey*, 25, who has been in three noncommitted relationships, told Mic. "I have a full-time job that I love and plenty of other responsibilities and relationships."

People who have a lot of other demands on their time, whether it's their career or spending time with family and friends, are "less motivated" to make commitments in their romantic lives, psychologist Jeremy Nicholson explained to Mic.

For instance, Nathan*, 28, told Mic that he's been tempted to exclusively date a few women in the past. But because he moves around a lot, it's easier to have multiple label-less relationships at the same time. "If I'm in Phoenix, I know someone who will want to go out to a show. In Boston, there's a woman who'll read poetry with me," he told Mic. "But I'm not in a conventional relationship, so to speak."

It's also all the more difficult to commit to someone else when apps make it easy to find hookups instantaneously. "It's kind of cliché, but it's also so easy to date people in the city," Sarah*, a 26-year-old media assistant, told Mic. "It's like sex and attention is a commodity."

She's not wrong. According to psychologist Caryl Rusbult's theory of relationship commitment, people need three things to want to actually stay in a relationship: satisfaction with their partner, a lack of alternatives and a large emotional investment. In today's ultra-saturated, fast-paced dating climate, that three-pronged package is much harder to come by.

We're defining a new "having it all." The avoidance of commitment doesn't mean millennials are love-phobic — far from it. Many are still seeking the intimacy of relationships, while simultaneously craving the independence of the single lifestyle.

Writer Isabelle Tessier recently nailed this sentiment in an essay titled "I Want to Be Single — But With You." Her ideal relationship, she wrote, would maintain a balance between being mysteriously sexy and comfortingly secure, committed and yet not committed:

"I want you to go have a beer with your friends, for you to be hungover the next morning and ask me to join you anyway because you feel like having me in your arms, for us to nuzzle against one another. I want to talk in bed in the morning about all sorts of things, but sometimes, in the afternoon, I want us to decide to take different paths for the day."

"Having it all" no longer seems to mean nailing down a spouse, kids and career. Today, "having it all" means killing it at work and enjoying a steady Netflix/sex companion while still being able to day-drink through Saturday with your friends. When so many people feel fulfilled by noncommitted relationships, being tied down doesn't seem that appealing.

As Tumblr user alwayzefree summed up noncommitment to Mic, the benefits of a nontraditional relationship include "freedom. Stress relief. Decreased likelihood of heartbreak. Intimacy at an organic level. Easy to communicate wants and limits. Manageable expectations."

And the drawbacks? "None so far."

Of course, there's a flip side to this coin. When we're fed a diet of constant new partners and yearslong "things," it can feel like our relationship muscles are becoming less taut. Sarah, no stranger to label-less relationships, explained that the thing about not committing is that one amorphous relationship so easily leads to the next.

"I'm so used to these nebulous relationships with no real boundaries or demands," Sarah said. "Like, I don't know how to be a girlfriend anymore."

While eschewing labels might be freeing for some, it can make others feel like they're stuck in relationship purgatory. "Having no labels really deterred me from asking that my emotional needs be met," Tumblr user etereoalma told Mic.

Tumblr user slyinwonderland had a similar experience when she entered a noncommitted relationship. "This experience was extremely painful to me, loving someone who I feared did not return my feelings," she told Mic. "I couldn't call him my boyfriend so I called him my 'slam piece' to hide my heartache."

Indeed, the pressure to be "chill" in relationships is high, as we're too afraid to own up to wanting the fuddy-duddy traditional kind of monogamy.

"We live in a world where caring less is attractive, sexy," Jordana Narin, who chronicled her label-less relationship for the New York Times, told Mic. "And I think this truism is as old as time; it's why we like those who are 'hard to get,' why we crave 'the chase.'"

Pop culture is currently full of characters who don't want to confront the terms of their relationships. On Broad City, Ilana becomes confused when she and her "sex friend" Lincoln hit an emotional patch: "Today I was actually with him all day, but I didn't see his dick once," she complains at one point. And the central premise of the recent Amy Schumer comedy Trainwreck is that for the commitment-shy, actually committing to someone who loves you can seem like a foreign concept.

For those used to sex without labels, the alternative is terrifying.

There's the hitch. For those who are fans of noncommitment, the frequent sex and lack of emotional intimacy that comes with such an arrangement is ideal. But for those who actually want to date with labels, accepting a noncommitted relationship might feel like a self-betrayal.

"In the long run, I think a lack of labels actually hurts us," one woman said of her relationship. "It invalidates whatever's actually happening between two people. I'm a romantic at heart; I love the idea of someone taking charge and saying, 'Hey, I really like you, let's make this official.'"

But for others, like Casey, great relationships can go without the label. "It's just really nice to know that even without a verbal confirmation, they still want to spend time with you."

*Names have been been changed to allow subject to speak freely on private matters.