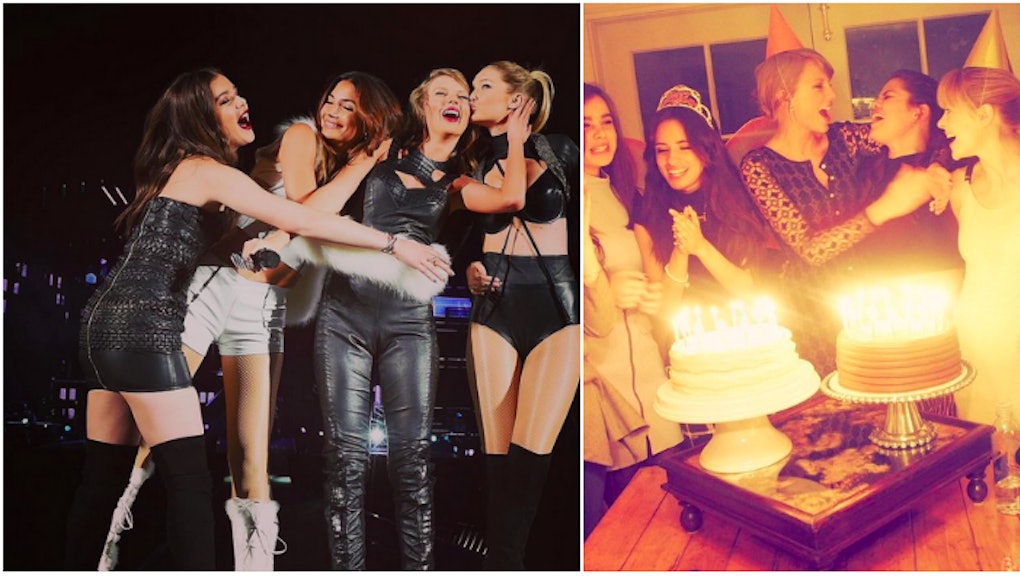 Taylor Alison Swift has added yet another #SquadGoal to her already-lengthy list of Squad Commandments:

Thou shalt not care if a squad member has dated an ex.

In an interview for Vanity Fair's September issue, Swift revealed that some of the ladies in her gaggle of famous friends have dated the same dudes in the past. (While she didn't specify who she was referring to, both Swift and her BFF, model Gigi Hadid, have dated singer Joe Jonas.) But she also stressed that having a D in common with a squad member hasn't created any problems.

"We even have girls in our group who have dated the same people," Swift told the magazine. "It's almost like the sisterhood has such a higher place on the list of priorities for us. It's so much more important than some guy that it didn't work out with."

Swift added that while she's well aware of how female friendships are portrayed in the media, she wants to make it clear that when it comes to her squad, her friends will always come before her exes.

"When you've got this group of girls who need each other as much as we need each other, in this climate, when it's so hard for women to be understood and portrayed the right way in the media," Swift told Vanity Fair. "Now more than ever, we need to be good and kind to each other and not judge each other — and just because you have the same taste in men, we don't hold that against each other."

She's absolutely right: There's plenty of research to suggest that we tend to befriend people with whom we have similar interests and qualities. So it stands to reason that a shared taste in men might factor into that as well.

Swift's comments serve as a refreshing reminder that our friendships should matter a lot more to us than any past romantic dalliances. After all, healthy friendships are what really keep us feeling loved and supported, and research demonstrates that they can even help lengthen our lives.

So props to Tay for keeping it in perspective and not letting her long list of ex-lovers get in the way of her even longer list of current besties. Now we just need her to pass this memo on to Gretchen Weiners from Mean Girls, who was clearly a little confused on both the English language and the meaning of feminism.