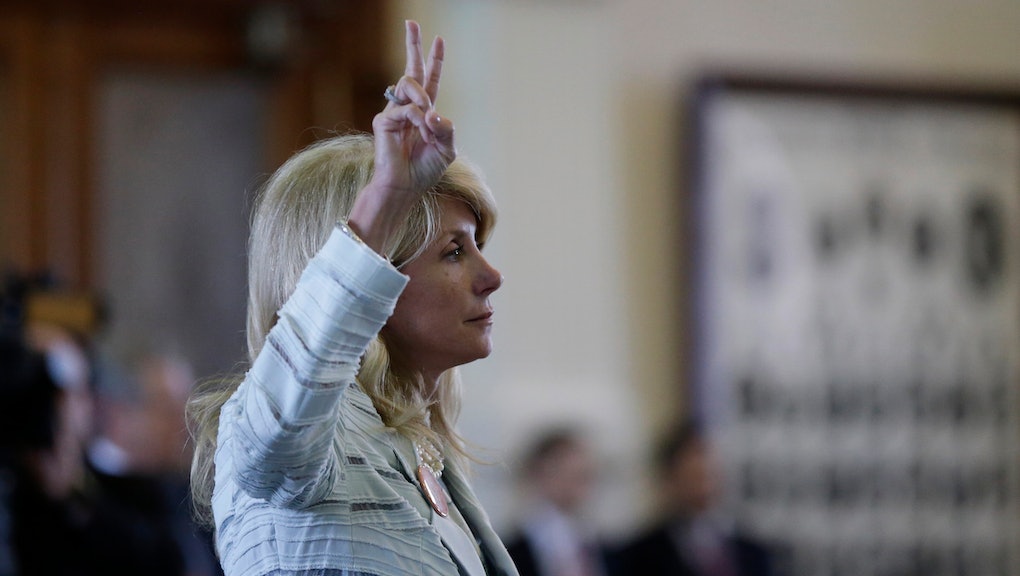 In the early hours of June 25, 2013, I found myself doing something I could never have imagined. Lying back on my bed, I winced as a doctor inserted a catheter tube into my bladder. No, I wasn't preparing for surgery. I was preparing for what I knew would be 13 hours on the Texas Senate floor in an attempt to kill a bill aimed at blocking women's access to abortion.

But the story actually begins much earlier than that. It begins with my own abortion experiences: first in 1994, when I discovered I was carrying a pregnancy in one of my fallopian tubes, rather than my uterus, and again in 1996, when I faced the heartbreaking reality that my much wanted pre-born baby was suffering from an unsustainable neurological defect. These experiences settled somewhere deep in me, creating an even greater resolve than I'd had before that decisions about terminating a pregnancy belong to a woman, her partner, her doctor and her god. They do not belong to a bunch of politicians using women's bodies as a wedge issue to gain votes.

Knowing that the 2013 bill before the Texas Senate would almost assuredly close off access to abortion for women in the rural and southern portions of my state, I gathered that resolve and headed to the Capitol, catheter in place. I was greeted there by signs my friends from Planned Parenthood had passed around that read "Stand With Wendy." Two years and two months later, I proudly "stand with Planned Parenthood" and the women and men it serves, as it faces extremists in the U.S. Congress who are on a mission to defund it.

Let's be clear: Monday's U.S. Senate debate on defunding Planned Parenthood wasn't about the use of fetal tissue for research and whether we agree with that practice. It wasn't about the sham attempts of a group connected to a known felon to make it appear as though Planned Parenthood had violated the law. It wasn't about hidden cameras. In fact, it wasn't even about whether federal funds should be used to fund abortion care, given the Hyde Amendment's prior prohibitions on the use of federal funds for that purpose. Monday's vote wasn't about any of that.

Instead, the vote was about creating a vivid and age-old archetype, with an evil villain and the heroes who have come to conquer it. The vote represented political posturing of the worst kind. It was about embarrassing and demonizing a century-old provider of compassionate health care — including reproductive health services — to score conservative points. It was about conservatives who are desperate for an electorate to see Planned Parenthood as a fire-breathing dragon, and themselves as the heroes who slay it.

The vote represented political posturing of the worst kind. It was about embarrassing and demonizing a century-old provider of compassionate health care — including reproductive health services — to score conservative points.

Planned Parenthood is much more than an abortion provider, and defunding their non-abortion work, which this bill aimed to do, would threaten to eliminate the contraceptive care, diabetes, STD and cancer screenings Planned Parenthood provides. But while these are important and vital services, so is the access to constitutionally protected abortion care that makes up a small portion of what Planned Parenthood does. Let's not shy away from defending that too.

It is unconscionable that politicians are willing to sacrifice the health care of the 2.7 million Americans, the vast majority of whom are women, who rely on Planned Parenthood for basic health services in order to achieve political notoriety, to score points with an electorate that they know will be fired up by demonizing this organization. But it happened on the U.S. Senate floor Monday. And it happened again Monday night at the New Hampshire Republican presidential candidate town hall. It was sickening to watch.

Planned Parenthood, and the countless women and men who rely on it, scored a victory Monday when the Senate voted not to advance the bill. But we've been down this road before. Extremist politicians will remain smug in their outward, grandstanding shows of contempt for this practitioner. They feel confident that they will be rewarded in the future by voters for whom Planned Parenthood is the bogeyman.

These politicians (most of whom are old men) who support the defunding of Planned Parenthood are hoping that their speeches and votes Monday — three days before the first debate among hopeful candidates for the Republican nomination for president — will bolster their extreme conservative bona fides. They hope they can build support among their rabid base at any cost. Even if that cost — intentionally or not — could leave the health of millions at risk, threatening many more lives than those they purport to be defending.

If I learned anything on the day of the abortion bill filibuster in Texas, it is that sharing personal stories lends something deeply meaningful to policy conversations. When people speak up and cry out against political injustice, they can affect the outcome. The real power that exerted itself that summer day in Texas came not from me, but, poignantly and beautifully, from the thousands of people who sent their stories to me to be read, who came to the Capitol to stand together, to cry together and, yes, to scream together to get past the midnight deadline and kill a harmful bill.

Monday is not the last time we will see the question of funding Planned Parenthood arise. There is already talk of a potential governmental shutdown over the issue when the budget is on the table for debate in September. And we know that this issue will continue to dominate much of the presidential debate season as well. I don't want to see another woman elected to office in this country have to go to the extremes I did in order to beat back these efforts. It shouldn't have to be that way.

So, what to do? The answer isn't complicated. Start by using your voice. It is more powerful than you might believe possible. Tell your stories, whether they be stories of abortion or other health care services you've received from Planned Parenthood. Encourage your friends to do so as well. Your experiences can help shape this conversation in a more important way than can any debate on a campaign stage or even on a congressional floor. And, as we head into the 2016 election cycle, own the power of your voice at the ballot box and help to assure that the women and men who will lead us going forward will feel responsible to a different set of priorities — yours.