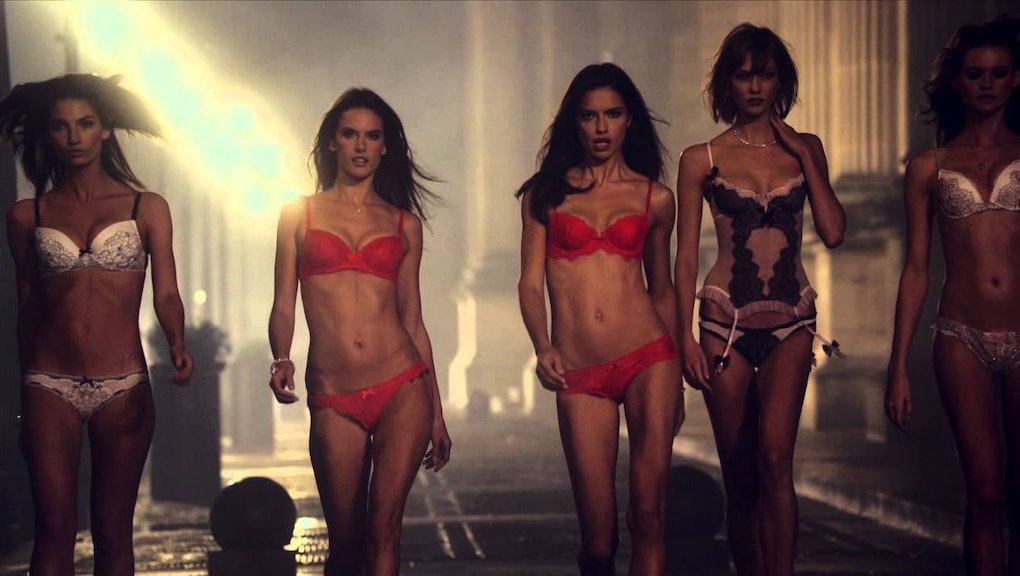 If Bra Commercials Were Actually Made For Women, Here's What They'd Look Like

"This bra will make you feel like Chris Evans is personally holding your breasts 24/7."

Wouldn't that be lovely? That's the way bras would actually be advertised if they were made with women in mind, according to a wise Tumblr post that's been reblogged more than 30,000 times and made it to Reddit this week. The original sentiment that kicked off the conversation and the first response from another blogger:

"It's weird how bra commercials are more aimed towards straight male audiences more than the audience that's actually gonna buy a fuckn bra."

True, isn't it? Just take one look at Victoria's Secret commercials, from the sultry gazes to the "perfect" bodies that make no attempt to reflect real women's figures. (The brand's latest commercial is directed by none other than Michael Bay.) There's nothing wrong with women feeling sexy in their lingerie, but something about bra ads suggests they're not about women feeling sexy; they're about looking sexy for men.

But we can imagine a world in which we'd have a lot fewer models parading in sexy push-ups and a lot more models shouting, "Yes! This is so effin' comfortable!" (Those '90s Herbal Essences commercials come to mind.)

So we polled a few millennial women and wracked our own brains: If bras were really marketed towards women, what would the commercials sound like?

"This bra features straps that never dig into your shoulders, but rather feel like Paul Rudd is giving you a shiatsu massage."

"This bra will magically adjust to your growing boobs, so it grows with you while you're bloated on your period."

"This bra will feature adjustable sides that automatically sink conveniently below the arm-hole level of any shirt you are wearing, especially when your boss walks by."

"This bra comes with a homing device for when you're groping around in the dark after a regrettable hookup and need to get dressed and leave AS FAST AS POSSIBLE."

"This bra features hooks that subtly scratch your back in that one spot you really can't ever reach."

"This bra has chameleon-like properties and camouflages to whatever color T-shirt you are wearing (unless it's a Saturday night out, in which case the bra turns black and lacy no matter what)."

"This bra is moisture-wicking and allows air to circulate so it feels like Henry Cavill is blowing his sweet, cool breath between your breasts."

"This bra comes with retractable straps to prevent any and all possible tangling disasters."

"This bra automatically tightens when you put your sneakers on for a run. No need to struggle with a sports bra ever again!"

"This bra comes with a built-in mini deodorant for those days that you're running seriously late."

"This bra has a 'nude' option that's adjusts to your exact skin tone."

"This bra comes with magically removable back panels for all those backless dresses you've been wanting to wear."

"This bra comes with discrete pockets for you to conveniently store your credit card, ID and keys."

"This bra is machine-washable. Because it's 2015, goddammit."

You're welcome, Victoria's Secret. We'll be expecting our check in the mail.