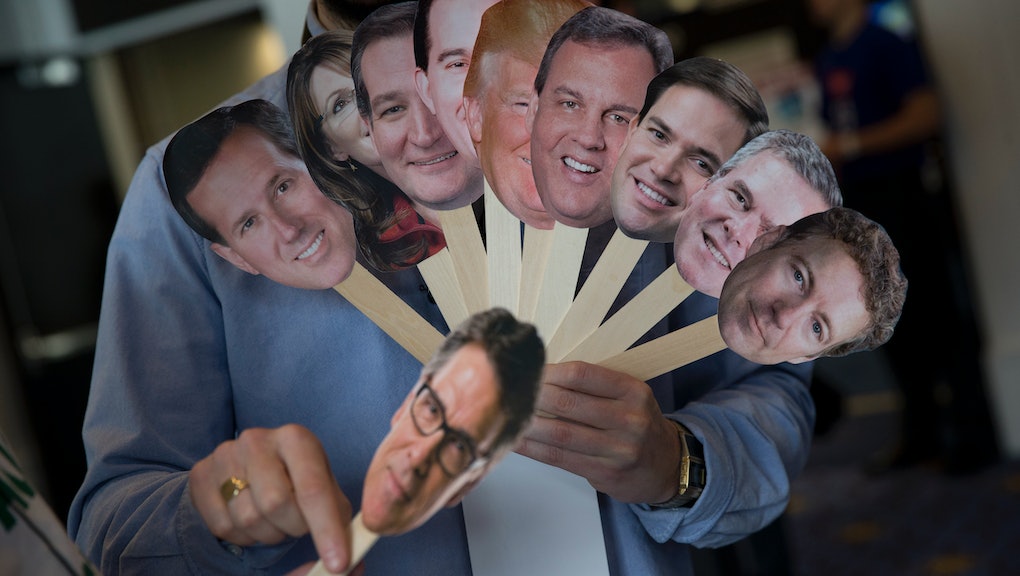 8 Burning Questions Ahead of the First Republican Presidential Debate

After months of haggling, hollering and oh-so-careful posturing, the Republican presidential primary candidates are in Cleveland for their first primetime debate.

The festivities begin at 5 p.m. ET, when seven of the 17 hopefuls, including former Texas Gov. Rick Perry and the lone woman in the field, former Hewlett Packard CEO Carly Fiorina, headline what should be a feisty undercard. Then, at 9 p.m. ET, the 10 highest-polling candidates take the stage at Quicken Loans Arena for the main event.

"People want to see how these candidates act," Chris Wallace, one of three Fox News moderators, told Politico ahead of the big night. "It's such a mess of a field."

You'd be hard-pressed to find anyone, from either party, lining up to disagree with Wallace's assessment. But uncertainty, especially in a high-stakes political event like this, breeds drama. And given what we've seen over the past few months, anything less than a delightful "mess" would be a letdown to a lot of excited viewers.

Here then, to pass the time before the debates begin, are eight big questions we're hoping will be answered during this much-anticipated Republican primary rumble:

1. Who will the candidates spend more time attacking: Trump or Hillary Clinton?

Why choose? Expect all the candidates to venture at least a shot or two, by name or not, at the Democratic frontrunner. In this friendly forum, jabbing Clinton is a sure-fire way to get the crowd on your side. That she won't be on hand to return the favor only makes the prospect more appealing. (That said, the Clinton campaign will be armed and ready — they've already set up a Web page for posting live rebuttals to the anticipated salvos.)

Taking on the Donald, however, will be a more fraught exercise. According to Fox News, Trump is slated to stand in the middle of the debate stage, poised to attack and, when necessary, defend himself with any manner of scornful quip or zinger. By rule, a candidate who hears his name is entitled to a 30-second response, so expect the others onstage to ignore him whenever possible.

2. Is there anything Paul can say to save his sinking campaign?

Remember when Paul was "the most interesting man in politics"? A lot of people were saying it, and Paul was happy to fuel the fire. What's most interesting about Paul these days is how quickly he's gone from top-flight contender to apparent also-ran.

In late July, Politico described his campaign as being in a "downward spiral," hamstrung by a flaky candidate "who obsessed over trivial matters like flight times, peppered aides with demands for more time off from campaigning and once chose to go on a spring break jaunt rather than woo a powerful donor." On Wednesday, the head of his super PAC, who has worked as a top aide to Paul and his father, former congressman and presidential candidate Ron Paul, was indicted on charges he bribed an Iowa politico during the 2012 campaign.

In a statement, Rand Paul called the timing of the government's announcement "highly suspicious given the fact that the first primary debate is tomorrow." Equally suspicious: why the Obama administration would, as Paul suggests, choose to target him at all.

3. How will the rest of the Republicans answer questions about immigration?

We know what Trump thinks of Mexican immigrants. But how about the rest of the squad?

For the most part, the Republican candidates have been fairly difficult to nail down. Rubio should expect to take some heat for his role in helping advance a 2013 reform bill that included a pathway to citizenship for undocumented immigrants. He might also be attacked for turning his back on the same bill after it became clear the GOP-controlled House of Representatives would never actually vote on it. Just as likely, Bush will speak kindly about individual immigrants while offering little in the way of actionable policy prescriptions. One more to watch, at least tonally, is Kasich. On Monday, he said "law-abiding, God-fearing" immigrants should be allowed to stay in the country. But it's unclear, even to activists who track this stuff, where he really stands.

Walker is the real wild card here, especially with Perry — a longtime border state executive who, despite his opposition to comprehensive reform preferred by most Democrats, has real-life experience dealing with the issue — falling out of the pollsters' top 10 and finding himself relegated to the "kids' table" debate. Walker has admitted to hardening his stance on immigration reform, telling ABC News in July "a combination of things" led him to reconsider his early support for a path to citizenship. Expect Walker to be quizzed on his change of heart by either the moderators or a fellow contestant.

4. Can Walker woo conservatives without a script?

No one doubts Walker's ability to light up a room of conservative Republican die-hards.

Consider this, a single paragraph from his 34-minute July 13 campaign launch speech:

Since I've been Governor, we passed lawsuit reform and regulatory reform. We defunded Planned Parenthood and enacted pro-life legislation. We passed Castle Doctrine and concealed carry. And we now require a photo ID to vote in the State of Wisconsin.

That's seven pretty remarkable conservative policy achievements in 40 words. If he can be half that efficient Thursday, Walker might double his popularity with Republicans who have yet to see him live in action. Trump supporters are going to defect to a more serious candidate eventually and a stirring performance in Cleveland could go a long way toward making Walker their guy.

5. Which candidate not named Trump will have the most outrageous plan to defeat the Islamic State group?

Here's where we'll really miss Sen. Lindsey Graham (R-S.C.), who has a habit of saying really interesting things when the topic shifts to the Islamic State group and wannabe Western recruits mulling a trip to Iraq or Syria.

Graham laid out part of his plan during an event in May in Iowa. "If I'm president of the United States and you're thinking about joining al-Qaida or ISIL — anybody thinking about that? — I'm not gonna call a judge," he said. "I'm gonna call a drone and we're gonna kill you."

Fair enough. A couple weeks later, he was taking a turn on Fox and Friends when one of the co-anchors asked if, you know, maybe Americans had "tired" of war — what did Graham have to say to those people?

With Graham relegated to the early debate, viewers can only hope Rubio will re-up his Liam Neeson impression and, like he did in May, address the extremists directly, saying: "We will look for you, we will find you and we will kill you."

6. How will the candidates present their plans for Planned Parenthood?

That Planned Parenthood should be stripped of its more than $500 million in federal funding is an article of faith in Republican politics. The question, for the party and these candidates, is how to discuss it without sounding cold or uncaring about women's health issues.

Bush cut off state aid to Planned Parenthood as governor in Florida, but when asked what he'd do now during this week's Southern Baptist Convention, he took it a step further, telling an interviewer, "I'm not sure we need half a billion dollars for women's health issues." Bush later said in a statement he "misspoke" onstage and believes "countless community health centers, rural clinics and other women's health organizations ... need to be fully funded."

The question as it is presented during the debate is likely to be wrapped into a broader question about the federal government — specifically, whether congressional Republicans should be willing to shut it down if they can't strip Planned Parenthood's funding through traditional channels. Here's a hint: If they say only that it would be among their first priorities after being elected president, the answer is "no."

7. Is Bush ready to fight back against Trump?

"I'm not a big fan of Jeb Bush," Trump said on Fox News in June and about a thousand times, in one form or another, since. "The last thing we need is another Bush, believe me."

For his part, Bush has called Trump's commentary "ugly" and outside the Republican mainstream. Bush's wife, Columba, was born in Mexico, so he has admitted to taking personal offense to some of the especially virulent Trump rants.

But the question going into Thursday night's debate, during which the two men will linger just feet apart, is how — and if — Bush bites back. A flash of anger, especially from the typically tranquil Bush, would cause a serious stir and probably be touted as a major turning point by establishment Republicans backing his bid.

8. Will Kasich break through or be ignored?

The Ohio governor will be on the periphery, literally speaking, of the action Thursday night. As the 10th highest polling candidate according to Fox News' math, his podium will be planted stage all-the-way-left. But Kasich is no wallflower — he will happily drop the gloves if given the opportunity. In fact, many Republicans have worried that his unruly demeanor might not play well in a national forum. And while that might be true at some point down the road, the first GOP debate would actually be a great time for Kasich to lose his temper.