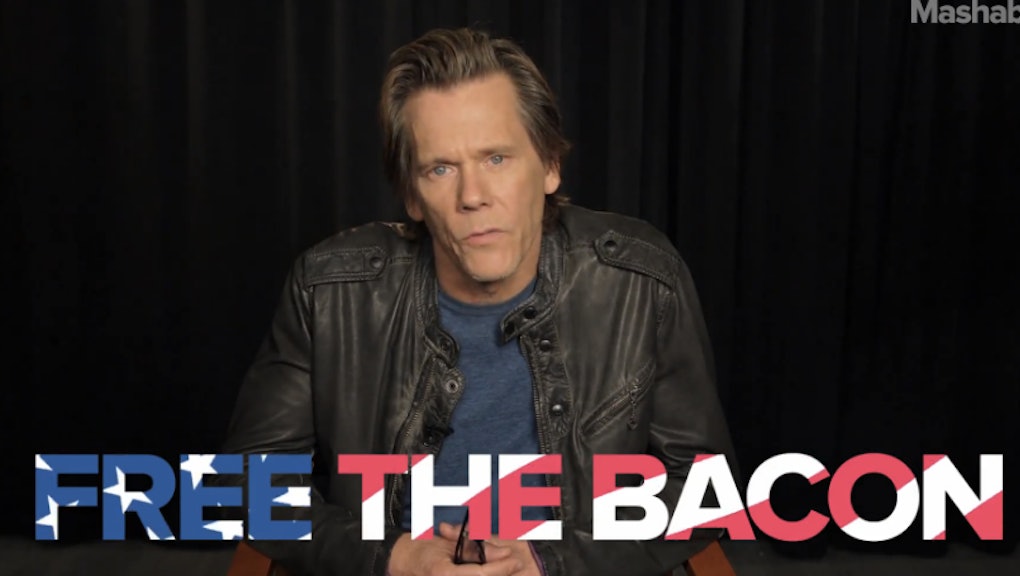 Female nudity has long been the standard in Hollywood. (We're looking at you, Game of Thrones.) Yet on movies and cable TV shows, full-frontal peen is woefully scarce.

So veteran actor and Hollywood's Patron Saint of Male Nudity Kevin Bacon decided to speak up in a mock PSA for Mashable, in which he delivers an important message for male actors:

Free the bacon. Drop trou. Show the world your penis.

A passionate proponent of peens: If you're familiar with his oeuvre, Bacon's pro-peen stance isn't super surprising. He's flashed his bacon bits in a number of films, most notably in the 1998 film Wild Things during a steamy shower scene (link NSFW) with Matt Dillon.

While 17 years have passed since Bacon's bacon made its onscreen debut, there has been fairly little progress on the nudity equality front since. The actor cites Fifty Shades of Grey as a peak example of Hollywood's nudity double standard going an inch too far (pun intended).

"I heard that you never even see it!" he lamented, referring to actor Jamie Dornan's member in the film. (He's not alone: At the time of the film's release, many members of the movie's predominantly female audience considered the omission of Christian Grey's wang egregious.)

More like Game of Boobs, amirite? While Bacon's PSA is intended to be lighthearted, it addresses a serious double standard in Hollywood, wherein the straight male gaze is heavily prioritized over the female and gay male desire to see some quality eggplant.

Nowhere is this nudity double standard more apparent than in HBO's female nudity-heavy Game of Thrones, which Bacon calls out in his video. "You got three sex scenes an episode," he said. "How hard would it be to show one or two wieners every couple of minutes?" Even Game of Thrones stars have spoken up about the show's lack of D, with actresses Natalie Dormer and Carice van Houten pleading with producers to showcase more male nudity.

With so many people speaking out against Hollywood's sexist nudity double standard, it's puzzling as to why we're still not getting more of the D we D-serve. But it's nice to know that there's at least one actor out there who's playing for team bacon.

You can watch the video below: