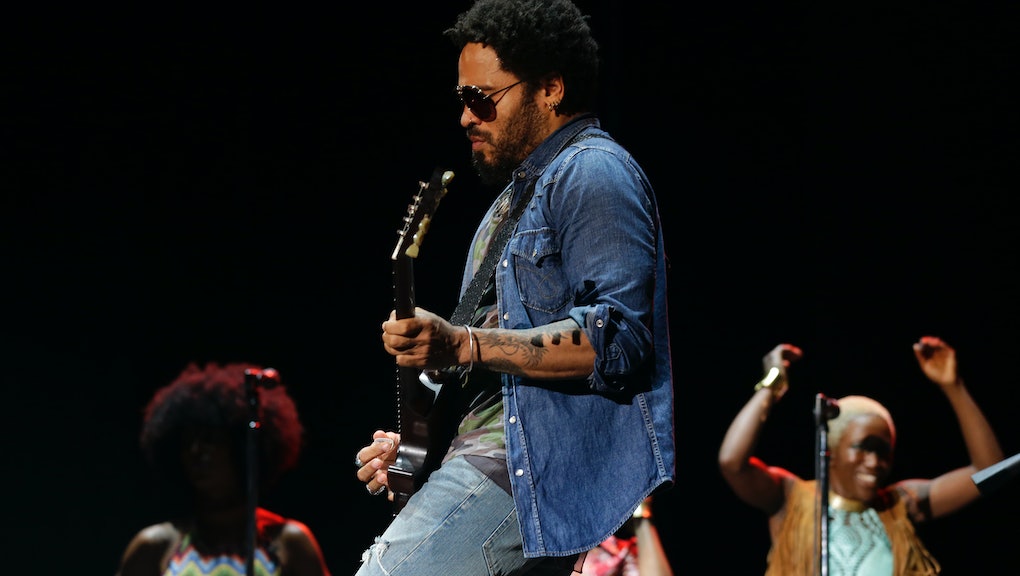 When most women have wardrobe malfunctions, they're supposed to respond by tittering adorably, slipping the offending body part back into its garment and apologizing, because they're ladies and that's what ladies are supposed to do.

If you're a dude and a ball or two happens to slip out of your gym shorts, you throw your head back in laughter and let your junk roam wild and free. That applies doubly if you're Lenny Kravitz.

The 51-year-old rocker proved that on Tuesday during a concert in Sweden when his leather pants split at the crotch during a guitar solo. The news quickly went viral, and to the Internet's delight, he wasn't wearing underwear.

Naturally, the incident went viral, with people on Twitter wildly speculating as to whether or not Kravitz's member was flaccid or erect. (We're on Team Half-Mast, FWIW.) Much attention was also paid to what appeared to be a metal bar on the base of Kravitz's penis, which some D enthusiasts identified as a piercing or cock ring of some sort.

Putting aside the question of why Tyler would've expected Kravitz to show him his dick in the first place (what, do they have a club or something?), it must be said that Kravitz's response sets an awesome example for those who have been shamed by wardrobe malfunctions. After all, it shouldn't be shocking to anyone that Kravitz has a wang, nor that said wang would accompany him onstage. If it managed to escape his trousers and make a cameo appearance during his set, such is life.

That said, the Internet's response to Kravitz's wardrobe malfunction highlights a double standard for women who have experienced similar malfunctions. While Kravitz's nonchalance — and the Internet's acceptance of it — was great, it raises the inevitable question: How would the world react if the same thing happened to a woman while she was onstage?

If the case of Janet Jackson, who famously exposed her nipple during the 2003 Super Bowl, is any indication, we know exactly what would've happened. She would've been forced to apologize for the cardinal sin of having a vagina and, had the incident been on-air, likely forced to pay a fine to the network. Oh, and her career would probably never have recovered.

While Nipplegate is something of an extreme example, when female celebrities have experienced "malfunctions" onstage, the response has generally been markedly different than that of Kravitz's dick slip. When Anne Hathaway was snapped going commando at a Les Miserables premiere in 2012, bloggers and anchors rushed to blame her for the incident, arguing that she should have had the foresight to wear underwear in the first place.

And when Britney Spears proudly declared, "My pussy was hanging out" during a now-iconic 2009 Tampa concert, bloggers didn't rush to celebrate her frank and unapologetic attitude; instead, they excoriated her, calling her "trailer trash."

It's great that we're not shaming Kravitz for taking the dictum to heart and rocking out with his cock out, regardless of any personal embarrassment he might have felt as a result. But it would be even greater if we didn't shame women for doing the same.