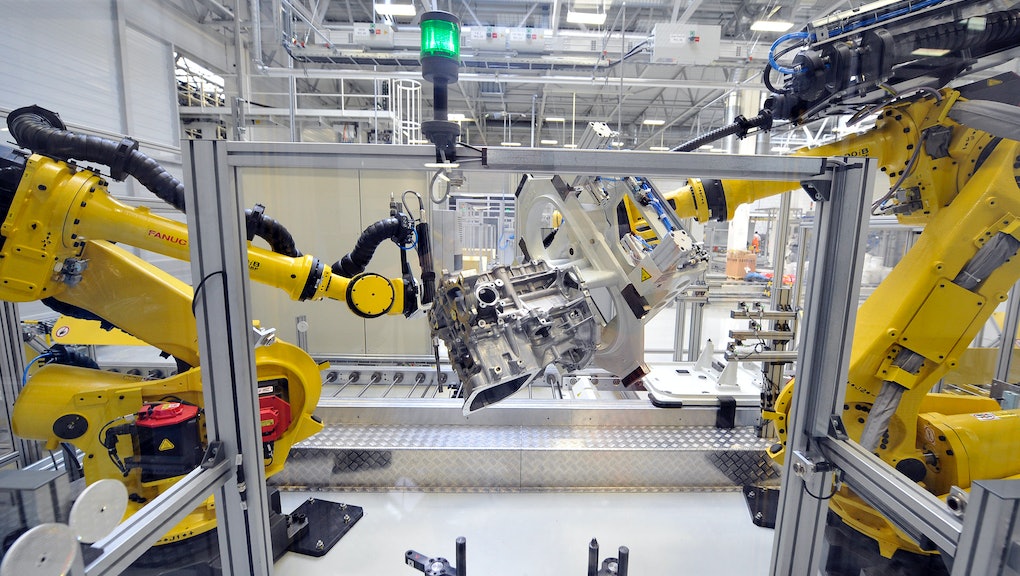 Robots Are Coming for Your Job — Unless You're a Woman

That depends. Are you a dude?

In a recent paper titled "The Future of Employment," Oxford researchers determined that 47% of all jobs in the United States were at risk of being replaced by some sort of automation, either by algorithms and software or literal robots. But a close look at the fields most ripe for automation are fields in which men hold most of the jobs, careers like driving and construction.

Men just experienced a economic cataclysm. We might just not have noticed it. The Great Recession decimated jobs in traditionally male sectors like financial services. In the recession, men accounted for almost three quarters of the 7.5 million lost jobs, according to the Atlantic, and many of those losses will never be recovered.

The Atlantic thinks that these factors combined will result in a sort of gender cataclysm that will overhaul the entire workforce:

On a mass scale, this pattern may result in an involuntary shift in the division of labor, with husbands tending to household duties after dropping their wives off at the office. Superficially, that may sound cheery, but the reality will be much grimmer, as families struggle to make ends meet on one income, and men struggle with the emotional upheaval of no longer having a place in the world of work.

The most obvious flaw with this reasoning is the idea that if men lose their jobs, our centuries-long cultural expectations and patriarchal norms will suddenly fall off their shoulders in a single breath. What's more likely is that remaining jobs in female-dominated sectors of the workforce will see an influx of new candidates.

Meanwhile, anyone feeling immune from the supplanting of male workers should consider that corporate administrative work is still done, in the vast majority, by women.

Manual labor isn't the only kind of work that robots are coming for. When most people imagine a glistening army of robots coming to relieve us of our commands, they see human beings stepping away from their hammers, wrenches, rifles and big rigs. But automation is going to kill plenty of white-collar jobs as well. In fact, simple online services are well on their way to replacing armies of HR representatives and accountants.

"Computers can't generally do creative things yet. If there's a job where you genuinely create something new all of the time, you're safe for the foreseeable future," Martin Ford, author of Rise of the Robots, previously told Mic. "But most people do relatively routine, formulaic work."

Instead, the jobs in which we should be looking for security — besides building robots and flying drones — are those that necessitate human ingenuity and sensitivity.

"A good example is a home health aid and taking care of the elderly," Ford told Mic.

Anyone feeling immune from the supplanting of male workers should consider that secretarial and administrative work is still done, in the vast majority, by women. Still, the question you should ask when wondering if your job will be automated is this: Does a corporation benefit from turning my job over to a piece of software? Because automation of jobs will continue to affect everyone in the modern workforce, regardless of gender or race.

But first, they'll be coming for the fellas.