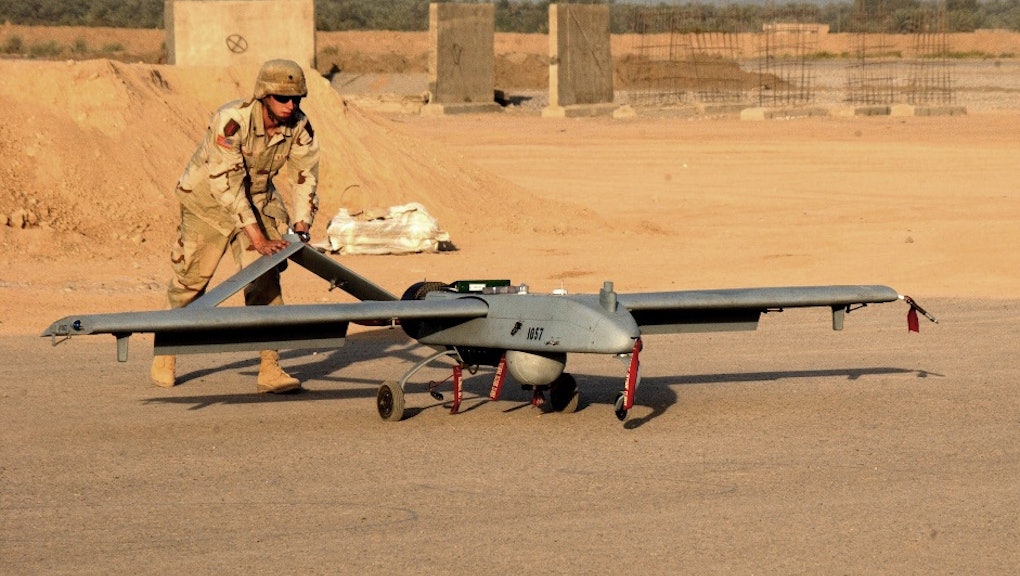 In the early afternoon of July 29, the future of crime flew over an Ohio correctional facility. A drone carrying tobacco, pot and heroin dropped its payload in the middle of a prison yard.

The drop spurred a fight between nine inmates, all thrown into solitary confinement, and led to 205 inmates at the Mansfield Correctional Institution getting strip-searched, put through sensors and clinic-checked. And it's not even the first time this has happened.

Around the turn of this century, U.S., Mexican and Colombian authorities were baffled to learn about the extreme drug-smuggling operations taking place under their noses. Some of the largest were unmanned submarines, dubbed "narco subs," that emitted radio signals to be found by receivers if the subs went off course.

But since then, smugglers both cartel-sized and small-potato alike have taken to the skies. In March of last year, a 28-year-old was arrested for allegedly using a quadcopter drone to smuggle drugs into a prison in Melbourne, Australia. Another drone, carrying a cellphone, tobacco and pot, barely missed the Lee Correctional Institution prison yard outside Bishopville, South Carolina.

Criminals have become colossally enterprising with UAV technology. Meanwhile, how does the law-abiding community use one of the greatest personal electronics developments in recent years? Mostly to take cool selfies.

Criminal uses for drones goes far beyond substance drops in prison yards. Here are some of the recent cases, along with the dangerous implications of increasingly violent flying objects in an unregulated industry of independent parties flying under the radar — pun intended.

In Benjamin Wittes' book The Future of Violence, he poses the argument that someone could build a drone system to "spread [anthrax] spores over densely packed groups of people." So far, we haven't encountered situations where a sociopathic engineer builds a drone to drop poison from the sky over Coachella. But plenty of UAV hobbyists have tested the boundaries of legality and ethics. Here are those cases.

1. The teenager who built a flying gun

Last month, an 18-year-old college student built a drone capable of carrying and firing a handgun. It wasn't technically illegal. The design was flawed; it was probably too big to reach a target without getting knocked out of the sky by anyone who saw it. But it proved a major fear about drones was true: Even the simplest robot is capable of killing someone.

In January, a drone carried roughly six pounds of meth from Tijuana, Mexico, to a parking lot near the California border. But instead of having a nearby operator, it worked from GPS coordinates, meaning it could run its course from a great distance, only navigated by a destination it needed to reach. An anonymous source within the Drug Enforcement Administration alleged that, between 2011 and 2012, drug traffickers used drones to deliver substances 150 times — and that's just what the department knows about.

At 2014's South by Southwest festival in Austin, Texas, a software developer unveiled its Chaotic Unmanned Personal Intercept Drone, which, armed with a 80,000-volt onboard stun gun, could be used to zap home intruders when they breach an invisible line, say, a driveway or a front yard. The unmanned drone could sense motion, identify it and send a notification to its user's phone before "detaining" the intruder with 80,000 volts of electricity.

Of course, with that sort of technology, it wouldn't have to be confined to protecting personal property, and the developer knows that. It could be used to terrorize, attack and violently injure anyone the user chooses, and all you need to operate it is a smartphone.

2015 is, apparently, the beginning of a drone-ethics pit bull debate. The technology can be extremely powerful, sending anything from Amazon packages to Internet access for disconnected parts of the world. But they aren't inherently designed to be destructive. That's squarely in the hands of anyone who happens to build one.