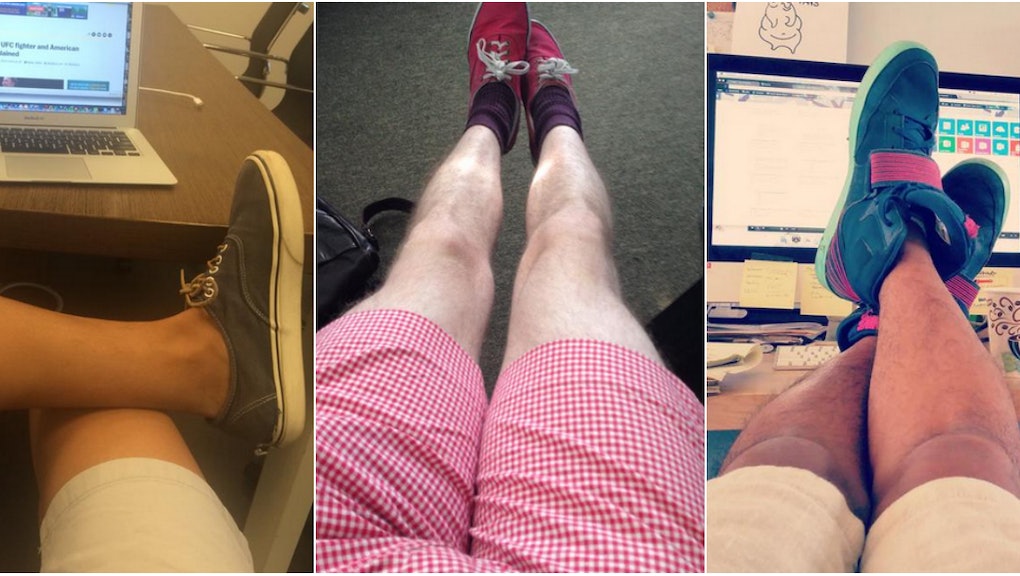 #FreeTheKnee Takes On the Biggest Men's Clothing Debate of Our Time

That's the eternal male dilemma, one being tackled by New York public radio station WNYC. The radio station has come down definitively on the "pro" side, declaring Wednesday #FreetheKneeDay and encouraging everyone to wear shorts if they want to — but especially men, who are oppressed by office uniforms that usually include pants year-round.

But do all men really think we should #FreeTheKnee?

WNYC wasn't alone in chiming in on an ongoing conversation about office attire, particularly the dilemmas created by the temperatures inside and outside the workplace. On Monday, the New York Times reported that offices are cranking their up air conditioning for men and their hulking, suited-up bodies — resulting in shivering women draping blankets over their adorable summer dresses and sandals.

Yet men face an opposite outfit problem. On the same day as #FreetheKneeDay, Christopher Ingraham of the Washington Post's Wonkblog published an article titled "I wore shorts to the office and nothing will ever be the same." His revelation:

"Men are sweltering, women are freezing and everybody's miserable. And in the midst of it, men, we're waking up every day putting on the same khaki pants and tucking in the same long-sleeved shirts and dutifully trudging to work in quiet sweaty desperation, waiting for October to come.

Ingraham was clearly excited about what, for him, is a game-changing outfit choice. "The hot, swampy, constricting morass of my morning commute was gone, in its place nothing but the transgressive thrill of a warm breeze ruffling my leg hair as I glided down L Street," he writes.

Yes, there are those who see men in shorts as an affront to all that's sartorially appropriate:

But that appears to be a decidedly old-school approach. "I think the idea to wear pants comes from the previous generation of men," said Ben, 28 and living in New York City, who told Mic he's witnessed disapproval from older men in his own workplace of the younger guys in shorts.

As for 20-somethings and 30-somethings, judging by Twitter responses, men and women seem to be totally cool (so to speak) with shorts for dudes. In fact, it seems like the only sensible choice. "If women can wear skirts, why can't men wear shorts?" said Dan, also 28 and in New York City.

It's not surprising the dress codes are relaxing to meet the millennial mentality. As Time declared, "Flip-Flops at Work: Millennials Finally Get What They Want." When it comes to freeing the knee, the odds seem ever in bare legs' favor.

Ingraham's one suggestion for the men who do want to wear shorts to work? Avoid the cargo pants.