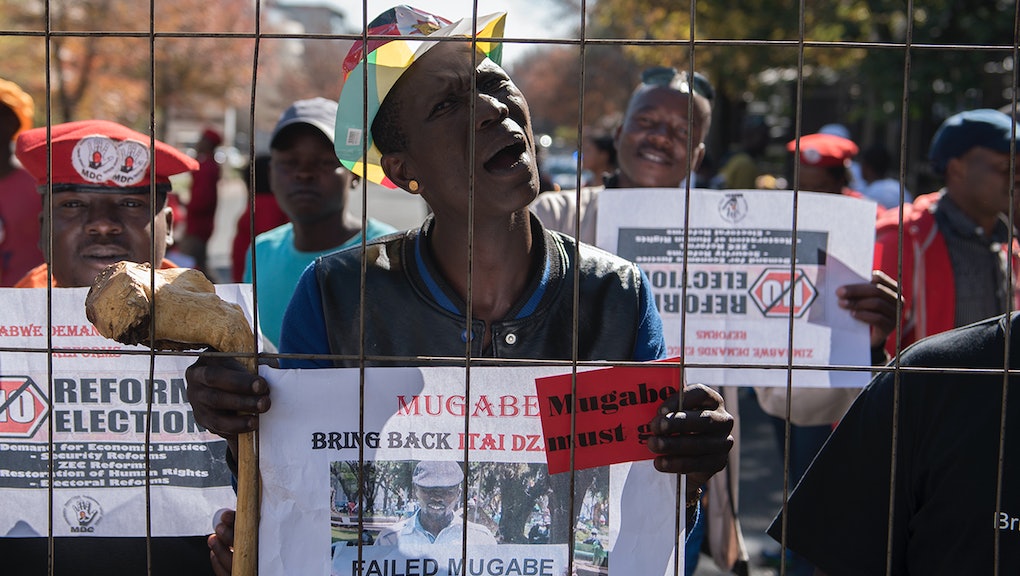 On Wednesday, Zimbabwe's ruling party, the Zimbabwe African National Union – Patriotic Front, issued a statement to Mic telling our news organization – and all U.S. media – that Cecil the Lion was over and it was time to focus on other, more important matters. Government spokesperson Gadzira Chirumhanzu claimed the larger issue of U.S. sanctions against smaller countries and police brutality against black Americans were the real issues that deserved attention.

"The lion story is no longer an issue, I want to believe. It has received its fair coverage.The real issue is the legal sanctions imposed by the USA government on small and powerless countries like Zimbabwe and the killings of blacks in the USA. This has to be stopped."

Chirumhanzu's assertion that more important issues should command the spotlight have been echoed by others in recent days, and when it comes to Zimbabwe, nothing could be more true.

Here are 11 photos highlighting some other major problems in Zimbabwe:

Since 1980, Robert Mugabe has ruled Zimbabwe as its president for life. Mugabe, who began his career as a revolutionary fighter against colonial and then-independent Rhodesia, has since been linked to a long chain of human rights abuses, economic mismanagement and virulent homophobia. At 91, Mugabe is the oldest current world leader and, so far, shows no signs of slowing down.

In 2014, Zimbabwe, a country of more than 14 million people had a GDP of $27.13 billion, ranking them 132nd among world economies. Unemployment figures are spotty but likely in excess of 80%. For those with a job, the average wage is $253 a month. Despite an abundance of natural resources, the country is heavily reliant on expensive, imported food, which further prevents people from rising out of poverty. A cholera outbreak, thanks in part to a lack of clean drinking water, killed roughly 4,000 in 2008.

About 15% of Zimbabwe's population — more than 2 million people — currently lives with HIV or AIDS. The country's economy has limited the availability of critical anti-retroviral medications and the health care system's ability to adequately care for patients. State-sanctioned homophobia and shame surrounding the virus has resulted in fewer people being tested and less education to prevent risky sexual behavior.

In 2008, Mugabe and ZANU PF faced their most serious challenge to authority when Morgan Tsvangirai, leader of rival party Movement For Democratic Change, attempted to oust the dictator through the country's stacked election process. Unable to forbid the election outright, ZANU PF goons beat and tortured so many MDC supporters that Tsvangirai withdrew from contention in protest, allowing Mugabe to coast to another term.

On Tuesday, Goodwell Nzou, a doctoral student from Zimbabwe at Wake Forest University, wrote an op-ed for the New York Times questioning American response to the killing of Cecil the lion. It read, in part: